How did Juneteenth come to be the primary national celebration of the end of slavery in the United States?

Wikipedia explains that the celebration of Juneteenth (originally Jubilee Day) began in Texas and later spread to other parts of the South. The date commemorates June 19th, 1865 when General Gordon Granger issued General Order No. 3 and read it publicly at Galviston island. The name Juneteenth caught on by the 1890s, and by that time it was celebrated on a significant scale within Texas. It seems that it was only much later, perhaps the 1940s, that Juneteenth began to be celebrated in other states, and it was spread widely by the Great Migration.

Did other celebrations of the end of slavery exist prior to the Great Migration? I would intuitively suspect yes, but cannot find any examples. It would be relevant to know either way, but this would still leave the question: why Texas? Was there anything particular about the black communities of postbellum Texas that can explain the emergence and wider adoption of their Juneteenth tradition?

Did other celebrations of the end of slavery exist prior to the Great Migration? I would intuitively suspect yes, but cannot find any examples.

The District of Columbia celebrates April 16th as Emancipation Day

The DC Compensated Emancipation Act of 1862 ended slavery in Washington, DC, freed 3,100 individuals, reimbursed those who had legally owned them and offered the newly freed women and men money to emigrate. It is this legislation, and the courage and struggle of those who fought to make it a reality, that we commemorate every April 16, DC Emancipation Day

In Tennessee August 8th has been celebrated:

The reason for observing August 8th as opposed to January 1st or even September 22nd—the day Lincoln announced the preliminary Proclamation in 1862—remains speculative. Some note that Tennessee Military Governor Andrew Johnson freed his personal slaves on August 8, 1863, at his Greenville, Tennessee, farm. Interestingly, Sam Johnson, a former slave of Johnson, was a key organizer for the first recorded August 8th celebration in 1871. Others allege that enslaved people in Tennessee and Kentucky learned of the Emancipation Proclamation on August 8, 1863. However, pro-Union Kentucky and Union-occupied Tennessee did not fall under the provisions of the Proclamation which abolished slavery only in rebellious Confederate states.

September 22nd is celebrated in some locations.

May 20th has been celebrated in Georgia and Florida. 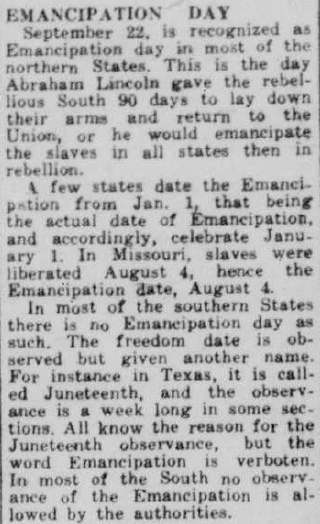 Celebrating Juneteenth has spread from Texas to Arizona at least by 1921, as the Phoenix Tribune has a big front page article on the local celebration.

Celebration in Oklahoma in 1915 was reported in the Tulsa Daily World.

A 1924 magazine American Lumberman says sawmills in the Elizabeth, Louisiana area would close for 1 to 3 days to celebrate Juneteenth.

Not the answer you're looking for? Browse other questions tagged cultural-history black-history texas or ask your own question.

32
When did the term “Nationality” first come into use? How did ancient civilizations refer to themselves? By ethnicity?
23
How come every culture on the planet has a different calendar, yet follow the same system for a week?
7
How did society regard identical twins in the 17th century in Europe?
6
How much did the western world know about the Soviet Union pre-WWII?