Ask Question
Asked 8 months ago
Active 1 month ago
Viewed 257 times
5
Want to improve this post? Add citations from reputable sources by editing the post. Posts with unsourced content may be edited or deleted.

I'm wondering about the percentage of Christians in Asia Minor/Anatolia in the early 19th century. There were significant Muslim immigration and Christian emigration later.

Emigration: Greeks in many waves, 1821, 1912-15, and their last exodus in 1922-24 after the Greek military disaster in Asia Minor and the forced relocation of reminder Greeks to state of Greece. Armenians, emigration of the reminder after the Armenian Genocide.

From what I've read most Circassians resettled in Ottoman Anatolia. The same applies for Balkan Muslims. Ecumenical Patriarchate of Constantinople's statistics, there where about 2.2 million Greeks, Christian Orthodox faith in 1912 Anatolia. There were also slaughters of Greeks and emigration to state of Greece after the Greek Revolution of 1821, which decreased their numbers. About 1 million Armenians, according to Armenian genocide numbers, were in Anatolia before the genocide, let's assume until 1900. Couldn't find much data on number of Assyrians/Syriacs of Christian faith (Oriental, Nestorian etc) probably less than a million. With a total population of about 13-14 million in Anatolia at the start of 20th century, about 3 million Christians, some thousand Hebrews, the rest Muslims, Christians were a sizable number at about 22-25% (I also expect Ottoman statistics of the era to report less Christians than their real numbers, that's why I believe Christians could be up to 25%). So before Circassian and Balkan Muslim resettlement to Anatolia and also before the first slaughter of Greeks and expulsion in 1821 from Anatolia, could Christian population in Anatolia be somewhere between 30-40% in the early 19th century?

All these numbers are debatable, gross estimations and assumptions from personal amateur reading. That's why I'm looking on scientific research on the matter. Guide me if you have knowledge of any such research.

The analysis by Abdolonyme Ubicini, as transcribed by Wikipedia based on research into the 1844 Ottoman census by Kemal H. Karpat and compiled in Ottoman Population 1830-1914, breaks down only as fine as the European and Asian halves of the Ottoman Empire; and gives a break down of 20% Christian and under 1% Jewish: 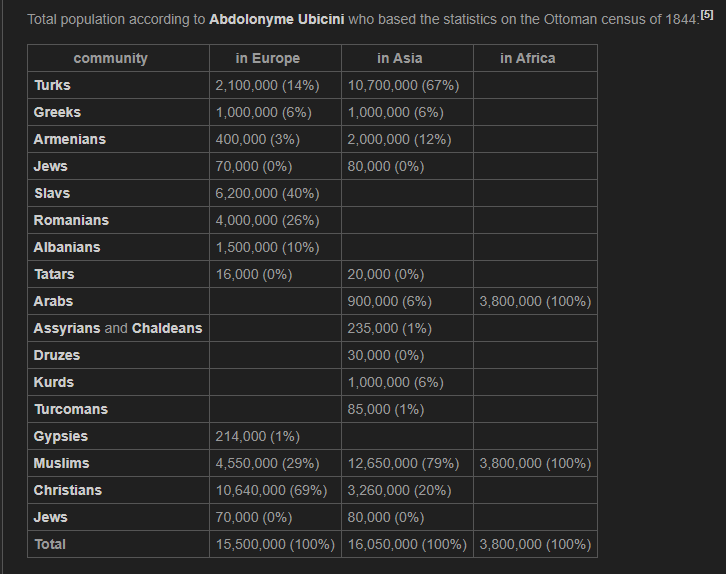 As the English translation of Ottoman Population 1830-1914 in the Digital Archive is still under copyright, any more detailed breakdown will likely require access either to that book or the primary Ottoman source records.

You have to go back a bit in order to understand the population shifts in Anatolia. In the year 1000, before the arrival of the Turks, more than 90% of Anatolia was Christian. This was about 6-7 million people. After the arrival of the Turks, the christian population started getting killed or expelled en masse from the Anatolian lands, so that by 1950, it was more than 90% Muslim Turk. This replacement happened largely between 1900-1925, with the genocides of Armenians (1-1.5million), Greeks (~1million), Assyrians (~0.5million) and Kurds. The total Christian population that was exterminated by Turks in Anatolia was probably in the range of 3 million in the 20th century alone, but around 3 more million perished (killed or forced to move) in the centuries before that (with e.g. multiple massacres between 1400-1900). As previous comments say, the Ottoman census of the late 19th century grossly under-reported Christian numbers, because they were aware that these numbers might be used to curve up their empire, hence the genocides to prevent further curving up. So I think that the true numbers of Christian populations in Anatolia could also be deduced by these basic numbers starting from 7 million at around the 11th century, gradually down to about 4 million by the early 19th century, and extrapolating for the different ethnic subgroups of the various Christian populations. This should a fair but rough approximation.

Not the answer you're looking for? Browse other questions tagged christianity muslims anatolia asia-minor or ask your own question.

14
What caused the imposition of strict celibacy for Catholic priests during the 11th century?
2
What is the difference between Anatolia and Asia Minor?
0
Are there any records of Turks settling in Anatolia before the 11th century?
7
Are there thirteenth century sources linking the Fifth Crusade to the Book Of Daniel?