Why was Poland subject to much harsher Russification than Finland was?

Russification in Congress Poland intensified after the November Uprising of 1831, and in particular after the January Uprising of 1863. In 1864 the Polish and Belarusian languages were banned in public places; in the 1880s Polish was banned in schools, on school grounds and in the offices of Congress Poland. Research and teaching of the Polish language, of Polish history or of Catholicism were forbidden. Illiteracy rose as Poles refused to learn Russian. Students were beaten for resisting Russification. A Polish underground education network formed, including the famous Flying University. According to Russian estimates, by 1901 one-third of the inhabitants in the Congress Poland was involved in clandestine education based on Polish literature. Starting in the 1840s Russia considered introducing Cyrillic script for spelling the Polish language, with the first school books printed in the 1860s; these attempts failed.

At the same time, Russification of Finland appears to have been much milder. The corresponding Wikipedia page makes no mention of any suppression of Finnish in schools and says that it is only in 1900 that Russian was made the language of administration in Finland. As a student learning the Russian language, I got curious to read the original, Russian version of the corresponding decree of 1900 and found there the following stipulation:

At the same time, we take into account the needs of private persons, who will continue to be provided with the opportunity to interact with administration bodies in the native language as freely as they use it in public and private life.

Why was Poland subject to much harsher Russification than Finland was? Both countries were included in the Russian empire at roughly the same time (1770-1810) and were located at its western border. So whence came the difference? Did Russian officials of that epoch say anything to shed light on that, or were there any obvious reasons?

The Russo-Swedish War of 1808–9 was, in many ways, Gustav IV Adolf's brainchild. In his inflated senses, the absolutist monarch thought that the early 19th century Swedish army could withstand the battle-hardened Russians. The monarch was disproven of this notion within the course of a summer, his own throne, as well as the (Grand) Duchy of Finland which became a part of the Russian Empire.

The (Grand) Duchy of Finland had existed since the 1580's with the King of Sweden also being the contemporaneous Grand Duke of Finland. Alexander I's conquest of Russia essentially acknowledged the previous Swedish methods of government in 1809 at the Diet of Porvoo where the four estates of the former Riksdag in Sweden gathered and swore allegiance to Alexander I as the Grand Duke of Finland who reciprocated:

"Providence having placed us in possession of the Grand Duchy of Finland, we have desired by the present act to confirm and ratify the religion and the fundamental laws of the land, as well as the privileges and rights which each class in the said Grand Duchy in particular, and all the inhabitants in general, be their position high or low, have hitherto enjoyed according to the constitution. We promise to maintain all these benefits and laws firm and unshaken in their full force." [Wikipedia]

Henceforth, the Russian Emperors would also be the hereditary Grand Dukes/Princes of Finland, and Finland an autonomous part of the Russian Empire with its own method of government. Alexander I was also relatively lenient with Finland, returning formerly conquered provinces (Old Finland) to the duchy.

Nevertheless, there were tendencies of Russification and proponents of the policy:

In 1830 Europe became a hotbed of revolution and reform as a result of the July Revolution in France. Poland, another Russian client state, saw a massive uprising against Saint Petersburg during the November Uprising of 1830-1831. Finland made no such move, as Russia had already won over Finnish loyalty. Thus, Russia continued its policies respecting Finnish autonomy and the quiet assimilation of the Finns into the empire. [Wikipedia]

Overlooking some decades of further lenient policy, Russification properly commenced under Alexander III and Nicholas II, two staunchly conservative people. This, however, was not specifically aimed at the Finns but rather against all non-Russians in the Empire. This weakened the Diet that had gathered more-or-less regularly since 1863. The effective periods of Russification, which quickly fostered anti-Russian sentiment in Finland, was therefore from 1899 to 1905 and then from 1908 to 1914.

Poland, meanwhile, had been an independent and prosperous kingdom up to the 18th century when its internal disputes led to increasing foreign influence and the Partitions of Poland (image). 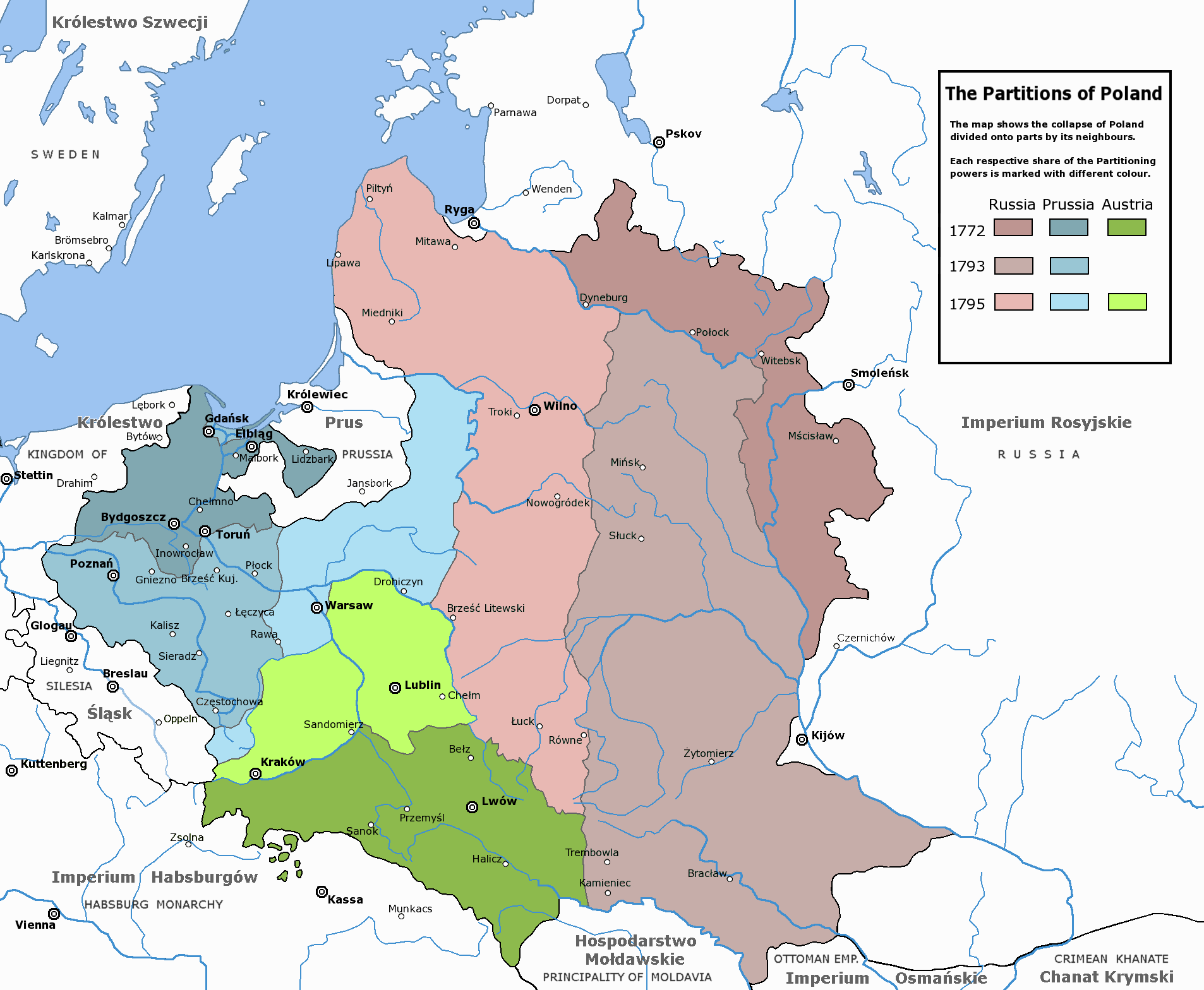 The Russian-ruled territories revolted on a massive scale during the Napoleonic Wars, and Napoleon set up his Duchy of Warsaw. This was re-conquered by Russian armies (amongst others). The Congress of Vienna retained these lands for the Polish as the Kingdom of Poland, with nominal liberties, but in essence the Russians looked at this as a conquered land.

The nominal liberties were curtailed after nationalist uprisings in 1830–31 and 1863–64, but these were only manifestations of the Russian tendency for autocratic rule in Poland that were apparent since the late 1810's when restrictions were introduced to curtail the power of the nobles, press freedoms, and censorship introductions. A major factor in this was the Sejm which the Polish hoped to use for guaranteeing their historic liberties:

Tsar Alexander left the administration to his younger brother, Grand Duke Constantine Pavlovich of Russia, to serve as viceroy. Constantine, with the help of Nikolay Nikolayevich Novosiltsev, "Russified" Congress Poland and oversaw secret police investigations of student groups in contravention of the Constitution. Alexander visited the Sejm in 1820 and received such condemnation from the deputies (members of the Sejm's lower house) that he reversed his stance of the Sejm as a liberalization experiment although he was still bound by the Congress of Vienna not to liquidate Russia's partition of Poland entirely. [Wikipedia]

Here we can see that while the Finnish population and nobility were brought on board by maintaining a liberal disposition, the Polish yearned towards their former status: a talk of liberalization and freedoms which went directly counter to Russian wishes for a people they had conquered.

Hence, Russification policies were in effect a lot earlier than elsewhere and these were intensified after every uprising and rebellion (to ensure this wouldn't happen again):

Russification in Congress Poland intensified after the November Uprising of 1831, and in particular after the January Uprising of 1863. In 1864 the Polish and Belarusian languages were banned in public places; in the 1880s Polish was banned in schools, on school grounds and in the offices of Congress Poland. Research and teaching of the Polish language, of Polish history or of Catholicism were forbidden. Illiteracy rose as Poles refused to learn Russian. Students were beaten for resisting Russification. A Polish underground education network formed, including the famous Flying University. According to Russian estimates, by 1901 one-third of the inhabitants in the Congress Poland was involved in clandestine education based on Polish literature.

Starting in the 1840s Russia considered introducing Cyrillic script for spelling the Polish language, with the first school books printed in the 1860s; these attempts failed.

The general Russification of the 1880's and 1890's was also carried out in Poland as described above—but this was already on top of decades of similar policies.

Meanwhile, up until Alexander III's general policy of Russification (which applied everywhere), the Finnish did not instigate any revolutionary measures which also meant that there was no need for the state to implement Russification policies.

There were several important differences between Poland and Finland, in Finland's "favor."

Russia had "conquered" Poland twice, once in 1795 after the Kosciousko-led revolution, again in the 1810s, after the suppression of the Duchy of Warsaw. The Russians felt that they needed to hold down the Poles.

Russia had acquired Finland with the acquiescence of their former overlords, the Swedes, in 1809. In Finland, the Finns had actually earlier petitioned the Russians to "sponsor" their autonomy from Sweden in the 18th century. This wasn't exactly what the Russians had in mind, but the Finns weren't seen as "unfriendly."

Sweden was not a threat to Russia (after its clear defeat in 1809), and there was no real fear that a weakened Sweden would once again invade Russia, using Finland as a way station. Also, the Finns were linguistically and culturally distinct from the Swedes (and the Russians hoped these differences would grow over time), so fears of the Finns making common cause with Sweden were miminal; "Russification" might defeat the purpose by pushing the Finns back into the arms of Sweden.

In Poland, however, Russia threatened to have a "falling out" with its powerful Germanic "partners in crime," Austria and Prussia. (This actually happened in the early 20th century.) Each of them had acquired Polish people in the three partitions, so Russia wanted desperately to differentiate "its" Poles from "their" Poles by Russifying them. Indeed, Russia's fears were realized in World War I when "Poles" from the Germanic lands fought for Russia's enemies.

Not the answer you're looking for? Browse other questions tagged russia poland finland or ask your own question.

9
What happened to copies of Holy Lance (Holy Roman Empire regalia)?
10
Was Nicholas II Romanov the last king of Poland?
6
Before the Great War, was the word “Poland” typically used to refer only to the Russian partition of Poland?
26
Was Kaliningrad offered to the Lithuanian SSR; was this offer rejected; and if so, why?
2
For how many years in the eighteenth century were Russian soldiers present within the Polish-Lithuanian Commonwealth borders?
3
What did Russia do in 1848 that could make the Austrians seek “brutal revanche” towards the Russians?
2
Did Helsinki have higher standards of living than Saint Petersburg when it was a part of the Russian Empire?