Was the alphabet invented only once?

It's a widely repeated claim that the alphabet was invented only once:

The invention of the alphabet is a major achievement of Western culture. It is also unique; the alphabet was invented only once, though it has been borrowed by many cultures.

every alphabet-based writing system that has ever existed is either descended from or inspired by that Phoenician one.

Because the alphabet was invented only once, all the many alphabets of the world, including Latin, Arabic, Hebrew, Amharic, Brahmani and Cyrillic, derive from Proto-Sinaitic.

The alphabet was invented only once. All alphabetic writing derives ultimately from an Old Cannanite alphabet and its immediate descendant, the Early Linear Phoenician alphabet.

the alphabet was invented only once: There is, strictly speaking, only one alphabet in the entire world. All alphabets in use or known ever to have been in use — the Hebrew, Greek, Roman, Cyrillic, Arabic, Sanscrit, Tamil, Korean and all the rest — trace in one way or another to the alphabet developed, perhaps in some way out of Egyptian hieroglyphic writing, in the ancient Syria-Palestine region.

Is the above true?

Isn't for example Hangul an alphabet that was invented independently (did not descend from and was not inspired by the Phoenician/Near East one)? (Wikipedia also suggests several other possibilities.)

Yes, that's almost certainly true. (By the strict definition of "Alphabet" at least.) There's a very good reason for it though. The invention of the alphabet happened after a highly unlikely confluence of events.

First off, let's start by going over what is so special about an alphabet.

You can actually categorize writing systems by how many unique glyphs they require. 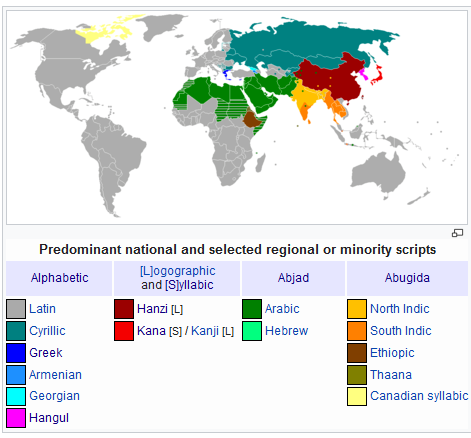 The first, most obvious way to invent writing systems is simply to create a different glyph (symbol) for each word. Its not particularly difficult to come up with this idea, with the result that pretty much every society around the world that got advanced enough to need writing first came up with some variant of this idea. This goes even for the Maya, who had nobody to copy the idea from.

The problem with this system is that it requires a tremendous amount of memorization. English has about a quarter of a million words, and even less rich languages run into the tens of thousands. Memorizing the meaning of thousands and thousands of glyphs in pre-modern times is not something that can be expected of any but an elite few who can devote years (or lifetimes) of effort to the study of the writing system.

To someone familiar with this problem and their own language, it isn't too horribly difficult to see one easy way to cut down on the number of glyphs: Instead of having one per word, have one per sound (or "syllable"). Words are essentially a set of interchangeable syllables spoken together with no break. That drastically cuts down on the number of glyphs required. Syllabaries were independently created in Japan, the Middle East, and arguably North America and Korea, and tend to have between 50-500 glyphs used. This is far, far better than thousands, obviously. However, that's still enough of an effort at memorization that it takes an order of magnitude more educational effort to memorize than an alphabet user had to go through.

Dropping another order of magnitude in glyphs is where we find the unique step. Syllables themselves at first glance seem like an atomic unit of speech. However, there are in fact two components to them: an (optional) "onset" (consonant) and a "nucleus" (vowel). Every language has a very limited number of these consonants and vowels that it has available to it. This isn't something anybody really realized until modern linguistics.

However, the ancient Semitic languages had a rather unusual (perhaps unique) feature: The rules for their syllables were very strict. In particular, all vowels had one and only one consonant attached. No clusters (eg: "sch" in "school") or nulls (eg: the English words "a" and "I") were allowed in the language. As some point the ancient West Semitic people realized this meant they could economize on glyphs. They could share glyphs between all syllables using the same consonant sound, and there was no ambiguity, because of this one-to-one relationship between syllables and consonants. This kind of consonant-only writing system is called an Abjad.

This got their required number of glyphs down from hundreds to only about 25. Seven-year-old schoolchildren can (and do) learn a system that uses only 25 glyphs!

This is why the Semitic people were uniquely positioned to invent the idea. For pretty much any other language, the scheme wouldn't work.

The Phoenician and Aramaic abjads caught on in the fertile crescent region like wildfire. Their influence was so pervasive that their neighbors ended up learning them too. Of course the obvious problem here is that this scheme won't work for non-Semitic languages. Probably the initial solution to this was that everyone just learned Aramaic. But how about making a similar scheme for non-Semetic neighboring languages?

A lot of their neighbors came up with hybrid approaches. Their eastern neighbors largely came up with schemes to slightly modify the consonant glyphs, and add extra glyphs as hints. Technically, this nets you similar to the number of different glyphs in a syllabary, but the number of base glyphs is still in the 20's, and the variants are arrived at via a scheme. So this is harder to learn than an Abjad, but still an order of magnitude easier to memorize than a syllabary. We call this kind of scheme an Abugida

But some clever person among the Greeks found a neat hack to adapt the system to their language: keep the basic consonant system, but add in separate vowel glyphs. Since most languages only need about 5 or 6 of those to cover their typical vowel space, this only increased the required number glyphs by that much, which is still a damn sight better than the hundreds required for a syllabary.

Hangul is a system where vowel glyphs and consonant gylphs are combined into one big glyph. Like an abugida, this means technically (for typesetting and computer font glyph purposes) its got the number of glyphs of a syllabary, but derived via a scheme so it isn't as hard to learn as one.

Its also quite debatable what its origin is. It wasn't invented until the year 1433. By that time, educated Koreans had been in periodic contact with western, middle-eastern, and Indian traders for quite a while. Korean society had been heavily influenced by Buddhist ideas since the 10th century, and its tough to imagine that not including any works written in abugidas such as Tibetan or Buddhist Sanskrit.

Also by this time Europeans had been mass-producing books with moveable type. The Koreans had been experimenting with the Chinese form of printing for quite a while as well. However, merely seeing that the Europeans could do mass printing with a limited glyph count, without even knowing the details of their writing system, was sufficient to induce a Cherokee blacksmith to produce his own syllabary. So there's no reason to expect a Korean seeing the same thing wouldn't be able to come up with the same idea.

So there was certainly opportunity, motive, and means for Koreans to have gotten the idea from elsewhere. Their system is also different enough to be the work of someone who saw that a system with a reduced glyph count was possible from seeing others do it, but not knowing exactly how those other systems worked.

What this all boils down to is that the real innovation here that deserves credit and celebration is the development of Abjads, and the credit there needs to go to the ancient Western Semitic peoples. This was indeed only invented once de-novo in human history, and its not easy to see how the insight would ever occur to an ancient who wasn't speaking a language with Semetic's unique features.

The other devleopments, pure Alphabets and Abigudas, are just adaptations of Adbjads, and there is no known instance of one being developed without prior exposure to another Abdjad, Abiguda, or Alphabet.

Isn't for example Hangul an alphabet that was invented independently (did not descend from and was not inspired by the Phoenician/Near East one)?

Many alphabets have been invented using letter shapes that are not evolutionary developments of the Phoenician alphabet's letters. The only real question is whether anybody independently invented the idea of writing using an alphabet.

The invention of Hangul in 1443 is shrouded in mystery and the nationalistic mythology of Korea's desire to carve out its own identity. It was invented as an alternative to writing Korean in the Chinese writing system. The official story is that it was invented by Sejong the Great, but more likely it was done by scholars working for him, with him then taking official credit.

The notion of an alphabet would likely have been known to elite Korean scholars in 1443. The sacred texts of Buddhism were originally recorded orally, then written down in Pali and Sanskrit, and finally transmitted to East Asia in Chinese translation by An Shigao and others in the 2nd century. Pali and Sanskrit were written in scripts such as Brahmi, which were descendants of the Phoenician alphabet.

There are various theories about the origins of the actual shapes of the Hangul symbols, including speculation that some of the shapes may have come from Indic scripts like Brahmi, from Mongolian writing, or from pictures of speech organs. The WP article Origin of Hangul has some material on this. The documents that originally described Hangul said enigmatically that some of the shapes came from "Gǔ Seal Script," which may or may not refer to the Mongolian ʼPhags-pa script, which is ultimately a descendant of Phoenician. The WP article suggests that the Mongolian link would have been minimized because Mongolians were considered to be barbarians.

So in summary, it sounds like it's almost certain that the people who invented Hangul had already heard of the concept of alphabetical writing systems, and the only real uncertainty is the exact derivation of the letter shapes.

The alphabet was invented only once

and many of the quotes look like complete nonsense. What is usually widely accepted is that most of the scripts currently in use today have a common ancestor.

18
Why did the Turks adopt the Latin alphabet after WWI?
8
How does a runic alphabet work?
13
Was there self-censorship in private correspondence in the early 19th Century?
5
What was the first scientific article to give a recognisably “modern” citation to another article?
6
What was the medium for Marcus Aurelius's Meditations?
13
Does modern scholarship accept an Ethiopian or Nubian origin for Egyptian hieroglyphs?