I am working on a novel that takes place in England during the Regency Era (1811-1836, the era right before the Victorian Era). I was wondering if you know if the name 'Valerie' or 'Valeria' existed in the Regency Era or maybe the Georgian Era? I am thinking about naming one of my characters as Valerie. Thanks. If anyone could please answer I would truly appreciate that.

The names Valeria and Valerie were not in common use in Britain during the Georgian era, but they were certainly known by some via Saint Valerie of Limoges and also because Valerie (in particular) was in use in European aristocracy and literature (both British and continental works translated into English) in the 18th and 19th centuries.

Valerie and Valeria are not mentioned in this article, Georgian Era Names, and nor do they appear on this list of 19th century names, nor on this list of "some of the most popular choices for Georgian parents in Britain" (though there are a few surprising ones such as Keziah and Theodosia). Nor is there any mention of Valeria or Valerie in the period following the Georges; see Amy M. Hasfjord's dissertation New Influences on Naming Patterns in Victorian Britain.

Neither Valerie nor Valeria appear to have much of a history of use in England: the names do not appear on any of the popular name lists from the late 14th century, the Elizabethan period, the time of the restoration, the top 50 names of 1700 or even the top 200 names of 1840 (just after your target period). Not until the late 1920s or early 1930s does Valerie break into the top 100 girls names. However, Chaucer did use Valerie in his Canterbury Tales, while Shakespeare (in Coriolanus) and the poet (and Poet Laureate) William Whitehead (1715-85) (in his play Roman Father) both used Valeria.

Thus, I wouldn't rule out the use of Valerie or Valeria as a girl's name. Valerie also appears in French literature during the period of the French Revolution, a time when many French aristocrats were fleeing to Britain, and Valerie was 'imported' from France (although it was not particularly popular there either for long periods at least - see here and here, for example). Perhaps the most notable use of Valerie was for Baroness Barbara von Krüdener's best-selling book Valérie, ou Lettres de Gustave de Linar à Ernest de G...., first published in French in 1804 and "soon translated into Dutch, English, German and Russia". In the book, Valérie is a countess in a loveless marriage with a much older man, but her behaviour is beyond reproach. 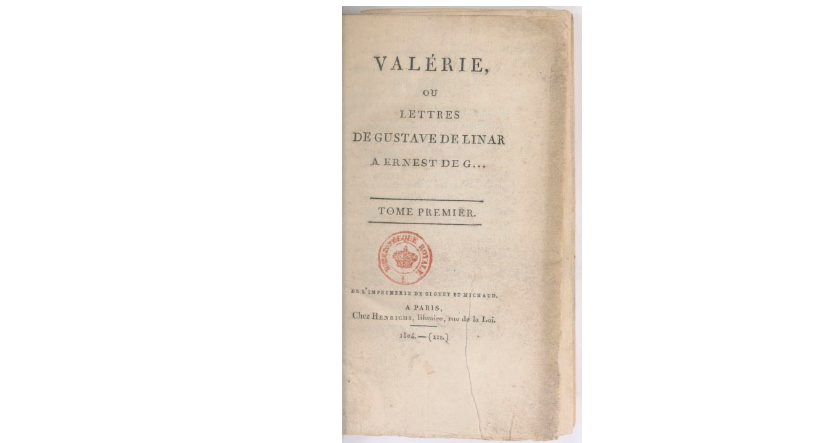 Some 'Valeries' that cropped up while searching include the American-born British socialite Valerie, Lady Meux (b. 1847), the Swiss writer Valérie de Gasparin (b. 1813), the Viennese Countess Valerie Erdödy (uncertain birth date but a young lady in 1869) and the Archduchess Marie Valerie of Austria (b. 1868), who was usually called Valerie rather than Marie. Given the extent of inter-marriage among European royalty, it seems plausible (if unusual and perhaps exotic even) for an English aristocratic lady to have the name Valerie or even Valeria (though you haven't stated your character's social class).

It doesn't appear to be a common name in the era, but it did exist in England

From ancestry.co.uk, I found only the following entries in baptism records from 1811-1831: Valorie Blower and Valeria Wright. The reference to Valerie Mc Morione Evans (as shown in the screenshot below) appears to have arisen from an incorrect transcription, as she was actually born in 1913.

From FreeBMD.org.uk (which starts in 1835), the earliest I found was Valerie Francisca Ashton, baptised Q1, 1840. 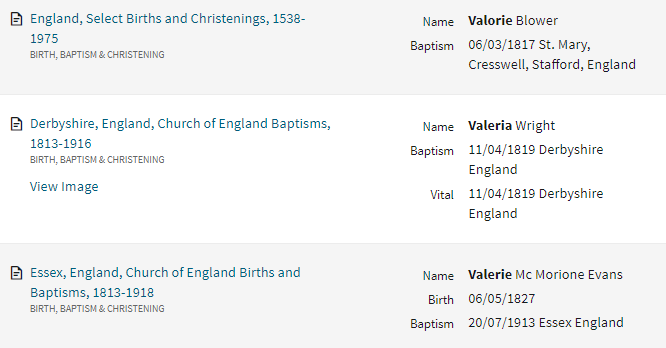 EDIT: I searched earlier dates and found some other references as below:

1
What name was given to Victorian era of confidence?
4
What was Captain Vozdvit's real name?
3
Was the name "William the Conqueror" (or its translation) actually used in William's lifetime?
11
When was King John of England given the name 'Dollheart', and who first used it?
14
Why is the name "Tecumseh" used for US Navy ships?
8
How popular was the name Imhotep?
1
What is the longest name chain?
3
How long would it take to sail from New Orleans to Belize in late Summer 1867?
6
At what age did girls start wearing corsets in 1880s-1890s Britain?