What uniform are these gentlemen wearing?

What uniform are these four guys wearing, and what medal is the central guy wearing? Possibilities are likely something Austro-hungarian or Romanian, possibly around 1900. Bonus question: what are they drinking?

This photo belonged to my wife's late grandfather, who emigrated to the U.S. from Poland (Galicia) in 1921. That's about all I can tell you. If you're interested in the medal, the photo is grainy enough that I can't see any more detail. Now, if the cord is a marksmanship award established in 1926, that creates a temporal problem; though perhaps the photo was mailed to him later. 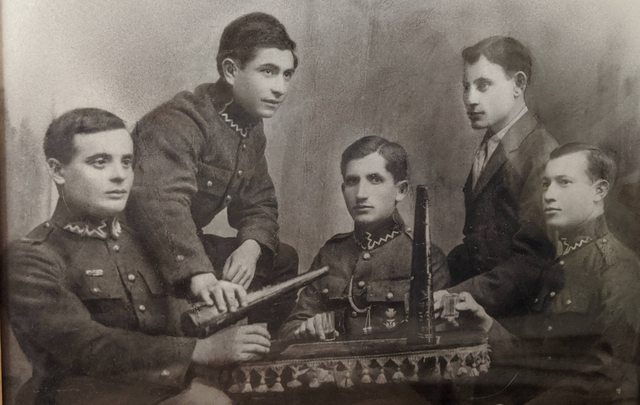 Here's a closeup of the medal and coincidentally, the bottle. 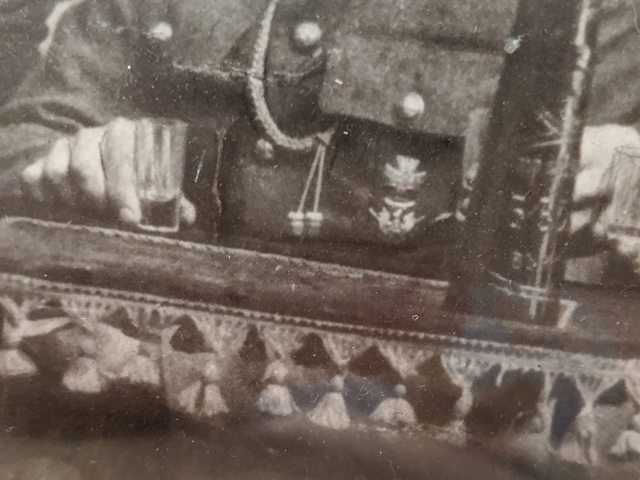 More notes: The grandfather in question, Solomon Zeidenstein, was born in 1904 and emigrated to the U.S. in 1921. There is some resemblance between him (though he's much older in all photos) and the soldier at left. There's also some resemblance between his older brother Abraham and the soldier at right. But that would mean a 16-year-old in uniform in 1920. Was anyone that young called up during the war with Russia, even when Warsaw was in danger?

The distinctive collar 'snake' pattern as well as the eagle worn by the guy sitting in the centre suggest that this is a Polish uniform: 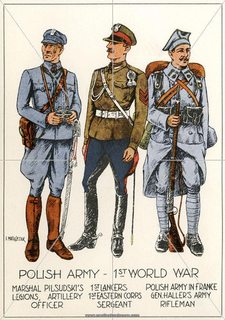 left guy has it already

A wire wężyk braid, also used for displaying ranks (plWP: Barwy broni i służb Wojska Polskiego II RP), occasionally worn during the war from its start, in Polish legions, with various combinations of uniforms (French, Russian, mostly Austrian. If in-war, the breast pocket flaps or most likely Russian?)
(— Nigel Thomas: "Polish Legions 1914–19", Men-at-arms, Osprey: Oxford, 2018. Providing pictures of most of these combinations. French Polish officers had the zig-zag pattern on their hats.)

More typical, post World War One, but not much later, as the collars were eventually not stand&fall and then usually much more tapered towards the 30s: 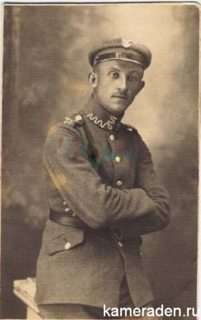 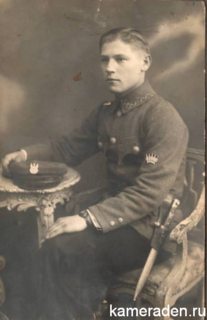 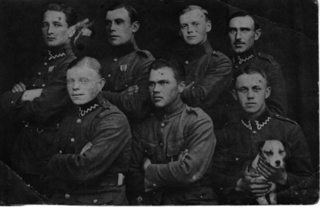 Example for the temporal development of the collar:

The seated man with his decorations might be wearing two isosceles cross medals — somewhat similar to a Greek cross or Cross pattée.

The details visible are not very clear for both, but the upper looks at first somewhat like a Virtuti militari, but the quite plain appearance with straight outer edges in this picture makes me think of an Odznaka Za Wilno: 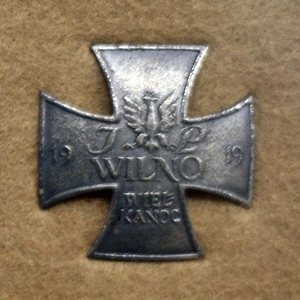 The lower decoration then might be an Odznaka Pamiątkowa Frontu Litewsko-Białoruskiego (Commemorative Badge of the Lithuanian-Belarusian Front) which came in no less than 9 versions. 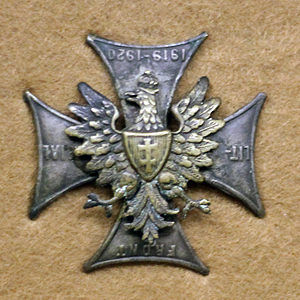 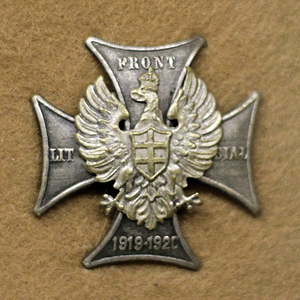 If that's indeed the case, then it is obviously post World War.

That same persons chord seems to be not the akselbant but a Sznury strzeleckie a 'shooter's chord' (marksmanship) as there seem to be two 'acorns' attached to it (although wearing it would be typically on the shoulder, not fastened below a breast pocket. Note that it looks indeed like he is wearing a Polish type in a somewhat 'kuk Austrian fashion':

If it is one of exactly these, then the date gets shifted to after 1926. But the variations that existed for the forms and ways to wear them seem to be offering a dazzling array of possibilities, a few of these decidedly earlier than 1926, the first of the following examples being accompanied with a description of '18/19': 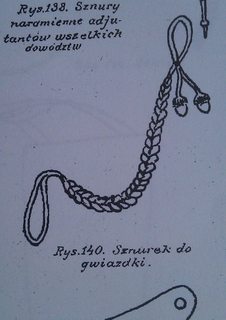 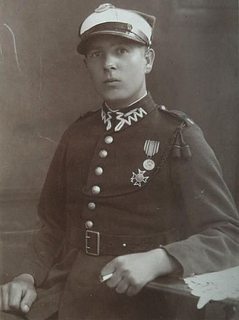 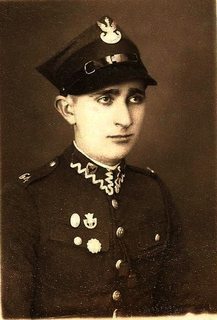 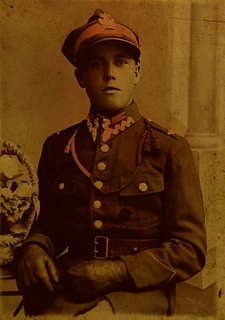 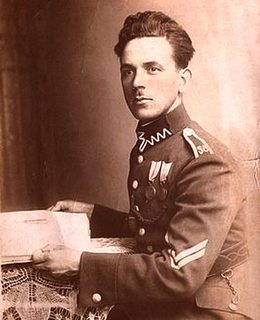 In contrast to the 'general' Austrian 'pompom/balls' style: 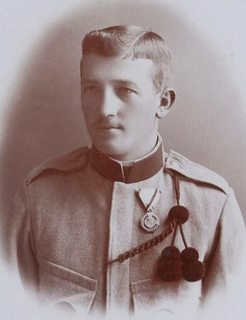 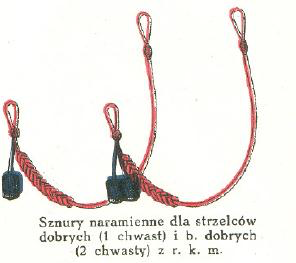 There are no rank insignia visible to my eyes on the shoulder boards, and together with the relatively low elaboration pattern on the collar, this might indicate quite a low rank.

The drink? Some strong schnaps is all I could identify now, judging by the size of bottles serving five and the small size of the glasses. The bottle shape might give away more?

For an excellent overview of the difficulties involved in visually identifying 'Polish' uniforms from 1914–1931 (the outer limits for this picture, with my best guest indeed gravitating towards early 1920s), look at the outline of the "history of the 51st infantry regiment of the Borderland Riflemen" (Zarys dziejów 51 pułku piechoty Strzelców Kresowych): Formed in Italy and named after Garibaldi from Austrohungarian prisoners of war clad in Italian uniforms. Sent to France to join Poznan soldiers recruited from German prisoners which had now French style uniforms. After being back to Poland they retained their hodge-podge uniforms and were issued new ones as well. Until the end of the twenties this mixing and matching seems to have persisted.

Stanisław Wycech (June 27, 1902, Sadoleś – January 12, 2008) was, at age 105, the last Polish veteran of the First World War. At the time of his death, he was, at age 105, the youngest living veteran of the war. Wycech was underage when he enlisted in the Polish Military Organisation in 1917 aged only 15 and participated in the disarming of German troops on November 10, 1918. He did not participate in the Greater Poland Uprising due to contracting typhoid, but was also a veteran of the Polish-Soviet War.

Underage soldiers were found in all armies at the time.

As many as 250,000 boys under the age of 18 served in the British Army during World War One. BBC. heartbreaking photographs child soldiers wwi-wwii

Lwów Eaglets (Polish: Orlęta lwowskie) is a term of affection that is applied to the Polish teenagers who defended the city of Lwów (Ukrainian: L'viv), in Eastern Galicia, during the Polish-Ukrainian War (1918–1919). […] Among the most notable Eaglets to be buried there was the 14-year-old Jerzy Bitschan, the youngest of the city's defenders, whose name became an icon of the Polish interbellum.

Not the answer you're looking for? Browse other questions tagged europe identification uniform photograph or ask your own question.