How did the layout of a Medieval European village typically change as it grew into a town?

Some of the research I've done so far

I know there is a lot of variation between the villages, but what was the common pattern or the most typical way layouts changed over time to accommodate more people in this medieval era? Specifically villages in Europe that grew big enough to be called towns.

By layout I mean the road shapes, the types of structures/buildings, and their density.

EG: Did a village grow out or did it become more dense (maybe walls rebuilt to accommodate growth)? Did the building of a castle have an effect on the layout?

If you have researched this at all, feel free to leave your take. The best answer would be the most detailed and reliable (have sources).

If any of this is unclear, please comment your concern and I will try to improve the question.

I would start with a brief explanation on how I'd classify township development in the Middle Ages. I don't expect this to be exhaustive, but rather illustrative of the few lines of development that I can note where cultural reasons might cause some variance from another plan. Please note this is not 'academic' per se, but rather some of the differences I managed to think about right now.

I would also recommend a look at my answer here regarding how market development affected a village's progress into a town (and which usually took place near a church). As the founding of markets was the source of revenue, these were highly regulated. While unofficial barter marketing probably took place, no lord would have allowed this on a grand scale as in an unofficial market.

In other words, both churches and markets were guiding lights for town development.

But I also wanted to bring some specific examples.

Some illustrations from placards that are up in Norwich (note the Cow Tower was not related to the chain towers I mentioned above, there is a placard by those as well I believe but I've not photographed it): 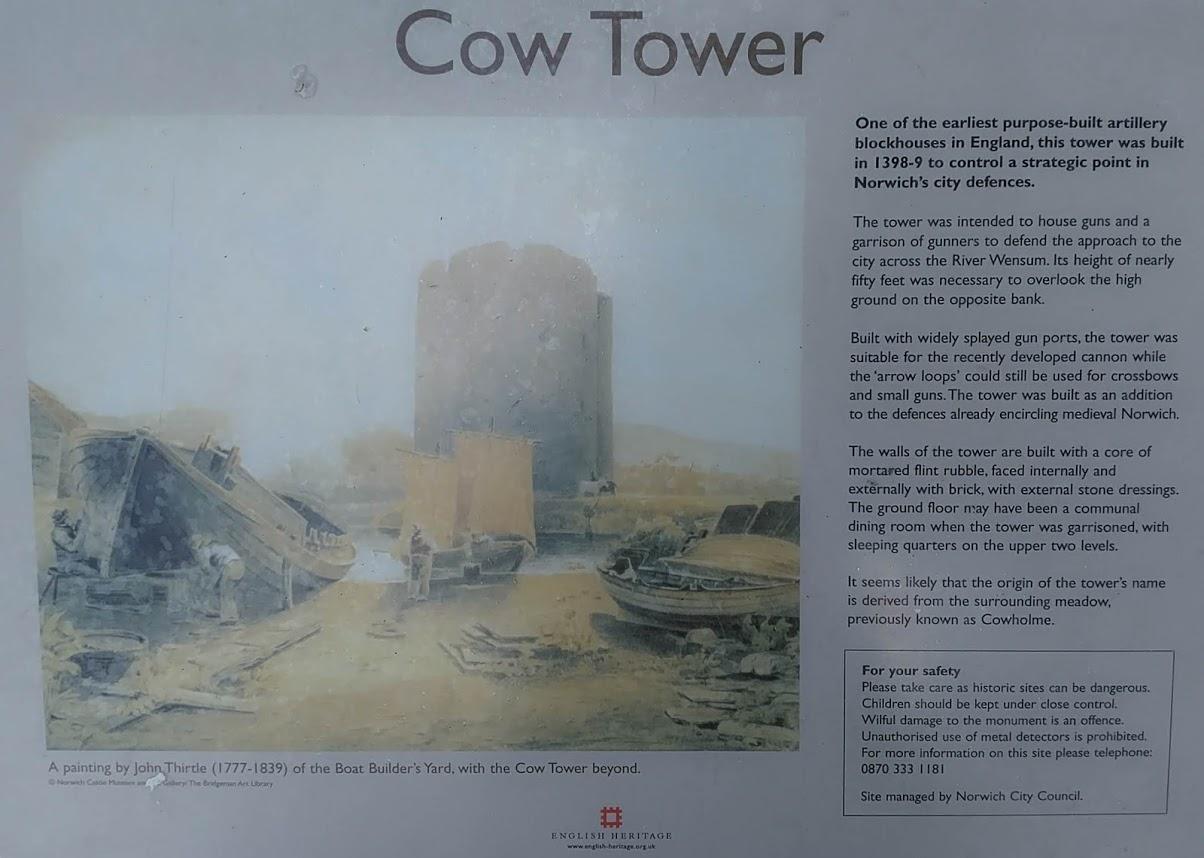 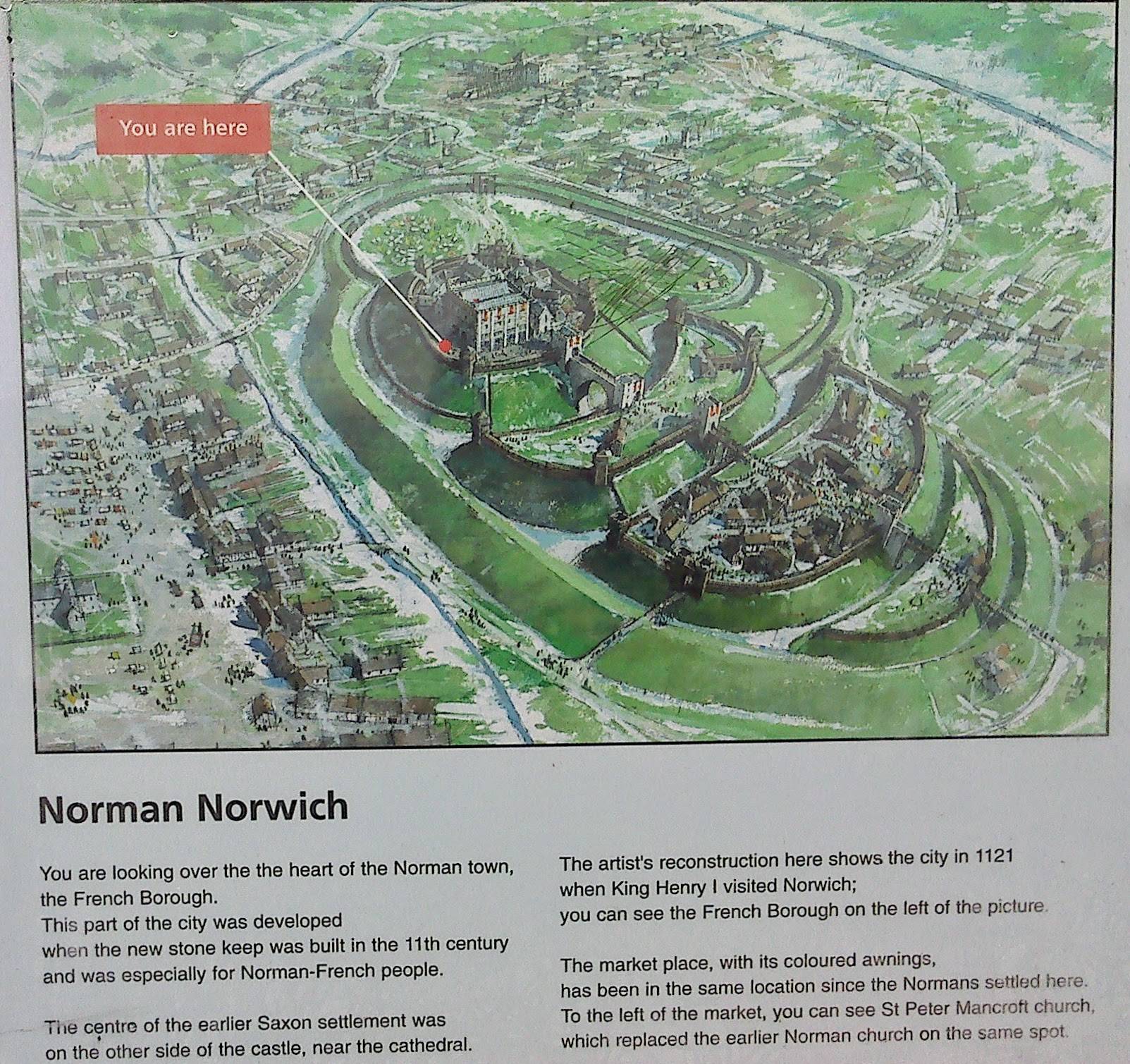 If a city was able to hold markets, settlements often grew around a central market square (replace with Suq for Islamic cities). In many european cities, this (former) market square, often in combination with a representative religious building to show the prosperity of the city, is still the center of the city. Some factors that differentiated a city from a village in Central Europe were:

So the market, legal rights (or the power to claim them, e.g. through sneakily building a wall) and an economic surplus was essential in the development from a village to a city. In an ideal development, this would move radially outwards from the market in all directions. In practice, riverbends, hills and other barriers usually dictated the direction of the growth of a city. Other than economic conditions, city walls often became an ultimate limit to city growth, as settlements outside the wall would destroy its defensive function and disallow line of sight. After a settlement reached its city walls, it could either create a new, wider set of walls or densify its existing structure inside the walls. The latter was the cheaper option up to a certain limit.

Many cities in central Europe only grew out of their city walls with the industrial revolution, a time in which walls became less functional and started to disappear. This often led to parks or major roads demarkating the old city from later structures on the position of the razed former city walls and the outlying glacis. They are often easily spotted due to their star-shape, based on the former Vauban-fortifications.

In some towns, a marketsquare-like opening already existed within villages, e.g. when they were built around a village green for grazing animals (see "Angerdorf in graphic below") or an elevated square (e.g. "Rundling"), which turned into a market square. The following graphic shows a few archetypal villagetypes of central europe, where this can be observed (Source: https://www.spektrum.de/lexikon/geographie/dorfgrundriss/1769): 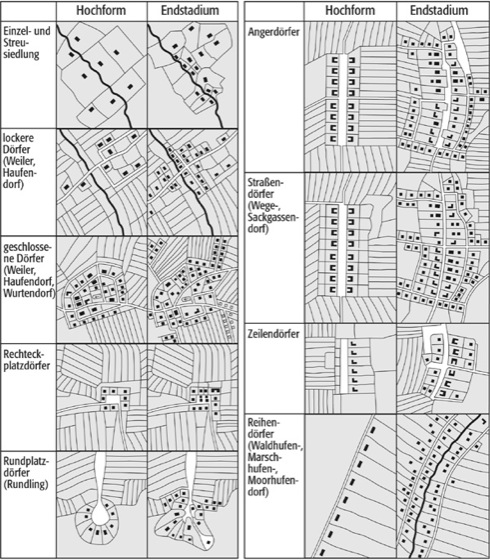 Not the answer you're looking for? Browse other questions tagged middle-ages europe early-medieval settlement or ask your own question.

7
How would an early Medieval German market have looked?

17
Early medieval urban development
7
How were peasant houses constructed in medieval England?
4
Settling legal disputes in high medieval Europe?
4
What was the composition of Medieval European armies?
26
When did the round house fall out of vernacular use throughout Britain and Ireland?
4
Did every medieval village in Europe have a manor, castle, or other type of lord's residence?
26
How did William the Conqueror consolidate his military victory?
7
How would an early Medieval German market have looked?
0
How did Medieval European river passenger transport develop?