Why do old townhouses sometimes have a flat, windowless, undecorated wall on one side?

In Oslo, I notice that many townhouses built around the turn of the twentieth century just have a large, undecorated, windowless, completely flat wall on one side.

Here is an example. This building was built in 1899. 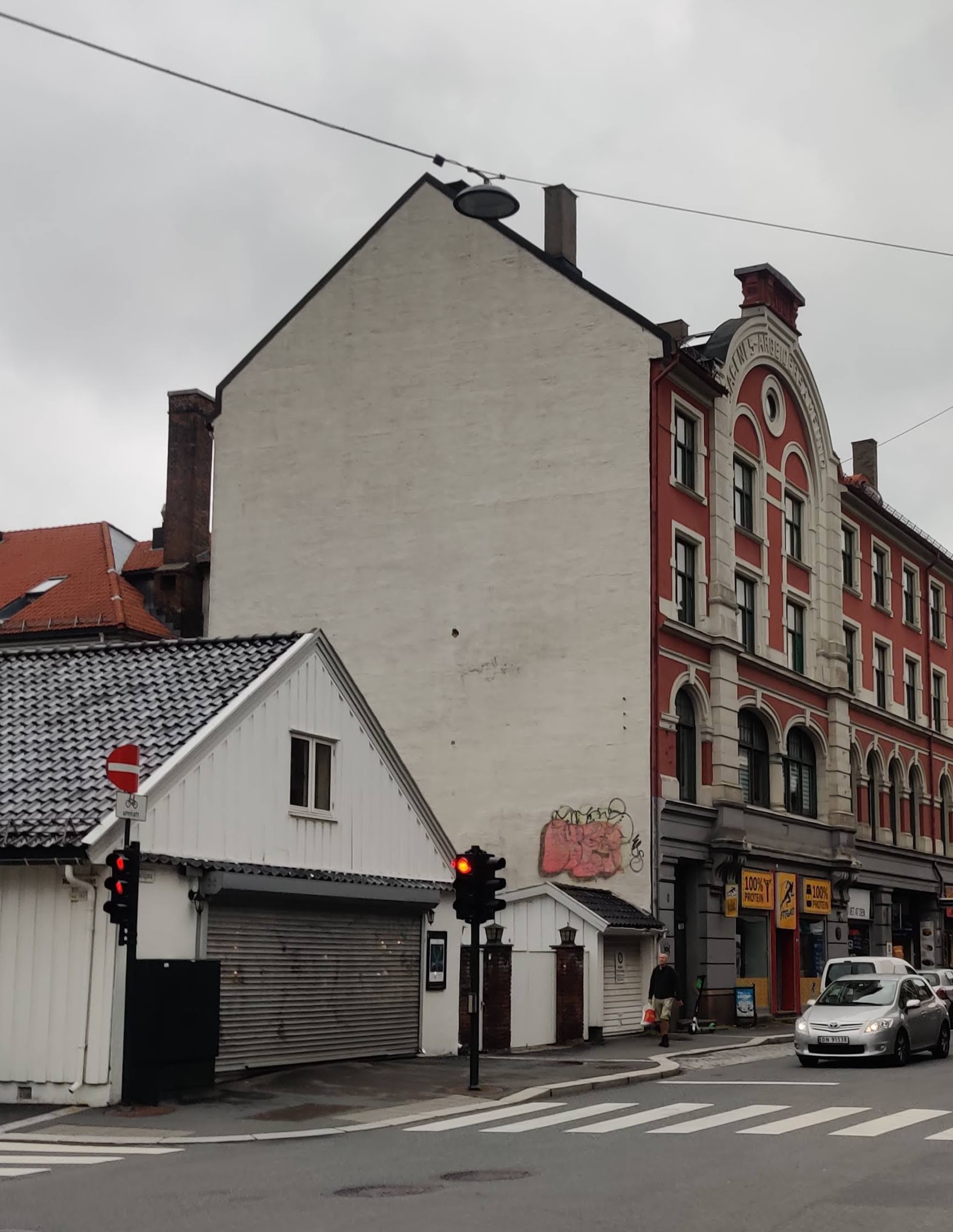 One possible reason I can think of is that this design made it easy to continue building another townhouse joined onto this, so this design kept that possibility open?

The obvious disadvantage would be that you get no windows in the rooms adjoining that wall. Also, elaborate decorations were common in the architecture of that era, so I find it interesting when I see such completely flat walls.

It is an effect of closed perimeter block development.

The address 'Arendalsgata No 3: Sagene working class society' looks like this from above: 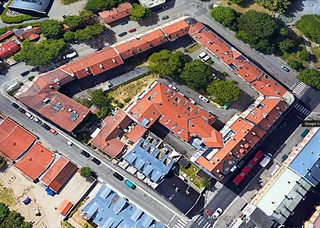 Orientation is the same as in the photo in question, so the building we want is in the lower right. The buildings to the left of that 'empty' edge with the small shed/garage are of a very different and later, post-modern type.

We see a very public front and a 'private' back space within this block. The original goal was to have the block enclosed completely with buildings, all joining one another directly at the side. There would not be any window, just the start of the next building.

Sometimes such blocks with several subsections were the property of a single owner, sometimes the block would be sectioned and belong to different owners. In this case it looks like the lower edge of this block was either demolished since the rest was finished or far more likely never completed in the intended style.

That style of city development fell out of favour, fashion and use after the onset of architectural modernity (Bauhaus and the like) but is now making a comeback as a tried and tested popular example of 'good' urban planning and development. 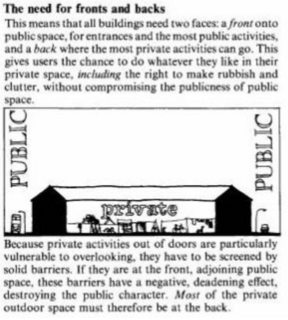 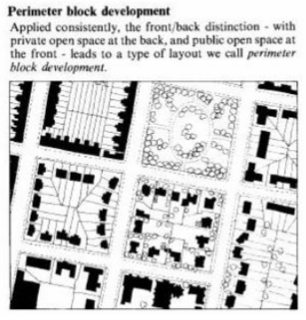 — What on earth is a perimeter block? (PDF)

We see the type in question in the second picture in the upper left. 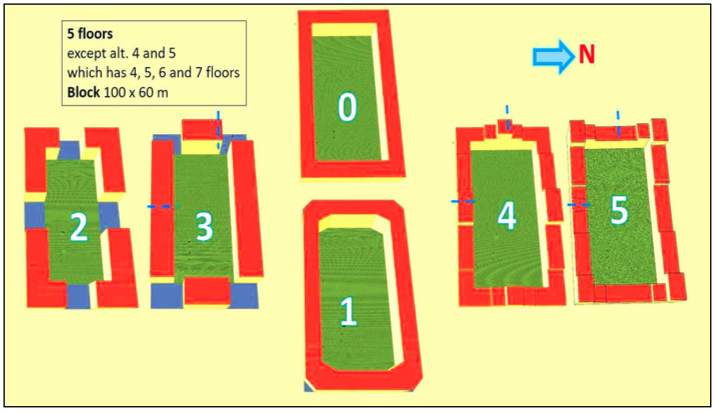 0 The conventional perimeter block (NULL) 0 is followed by five alternatives:

In short: it is indeed a feature of "this design [that] made it easy to continue building another townhouse joined onto this, so this design kept that possibility open". It was never inteded to remain visible, and never intended to be used for any kind of windows or other openings.

Aspects of this are covered in Wikipedia: City block, Norwegian Wikpedia: Kvartal (bebyggelse) and quite well in German Wikipedia: Blockrandbebauung:

The Roman city of antiquity can be regarded as the "archetype" of block-edge development, in some places particularly high and dense insulae were built. Medieval cities were also often very dense and urban, but they usually did not follow any particular order, except, for example, for planned cities. At the latest in early modern times, the concept of closed blocks of houses experienced a revival. In particular, the cities laid out or expanded by princes in those times were planned and built in this way. Mannheim's square city can be regarded as a good example of a consistent block-edge construction method of the 17th century, which is still clearly visible today. In other European countries, too, block edge structures planned for large cities were created at this time, e.g. in St. Petersburg and the Amsterdam canal belt.

When cities expanded in general as a result of industrialisation in the 19th century, the perimeter block construction method was almost taken for granted. Haussmann's redesign and urban consolidation of Paris between 1853 and 1870, which cities such as Budapest, Bucharest and Buenos Aires emulated, became world-famous. The Hobrecht Plan for Berlin of 1862 also shaped the urban development of the time, as did the metropolitan expansion of Vienna, including the Vienna Urban Expansion Fund. In North America, the Commissioners' Plan, which came into force in 1811, regulated the expansion of the settlement of the island of Manhattan for almost a century.

The generation of 'neues Bauen' that began to take hold from the 1920s onwards was predominantly hostile to the perimeter block development. In 1929, for example, the architect Le Corbusier demanded: "Il faut tuer le rue corridor!". (You have to kill the corridor street). The Charter of Athens, which he published in 1943, was intended to move modernist urban planning away from dense development and led to a strict functional separation of urban spaces in many cities worldwide, for example into purely residential, office and shopping quarters. In addition, the loosened up construction method with large open spaces was propagated. This construction method was also accompanied by criticism from the very beginning, at the latest with the demolition in 1972 of the Pruitt-Igoe housing estate, which was not built until 1955 and whose demolition was retrospectively proclaimed as the beginning of postmodernism.

At the end of the 1980s, the New Urbanism movement led to the resumption of perimeter block development. According to their representatives, perimeter block development supported the advantages of urban life combined with significant savings in resources (access routes, heating costs, infrastructure costs, etc.). Based on the Leipzig Charter on Sustainable European Cities published in 2007, the National Urban Development Policy Initiative promotes mixed-use and dense development in Germany's cities. In doing so, the problems that already existed in the 19th century reappear at least in part.

As to the speculation about a potential, early 'symmetry', we might consult Oslo by leksikon, or this:

Sagene Arbeideramfunds hus was built in the years 1899–1900 on a plot of Dannevigsveien, acquired from builder Nils Skaalerud. The architect was Johan Storm Munch. Sagene Arbeideramfund was founded in 1881. Their flag, a gift from the business owners along the Akerselven, was given on 17 May 1884. This later came to the Technical Museum.

The houses of the sawmill workers' society are built of plastered brick over four floors. The composition is strongly asymmetrical, with a dominant siderisalite crowned by a characteristic semicircular gable. The risalit is further marked by the flanking colossal pilasters that rest on paired consoles. The ground floor has been plastered, and the cornice of the floor has been moved slightly up into the risalit. The style expression is neo-baroque with a touch of Art Nouveau style.
— Arkitektur og historie i Oslo: Sagene arbeidersamfund, Arendalsgaten 3

Showing clearly that this building was designed originally in the way we find it today.

Not only Oslo, but when connected buildings just 'end', when the lot has no more space to 'connect more', then as well in Sagene/Oslo it will probably look more like this:

Since light and air are always considered important and beneficial for a building as evidenced multiple times in this Sagene photo: 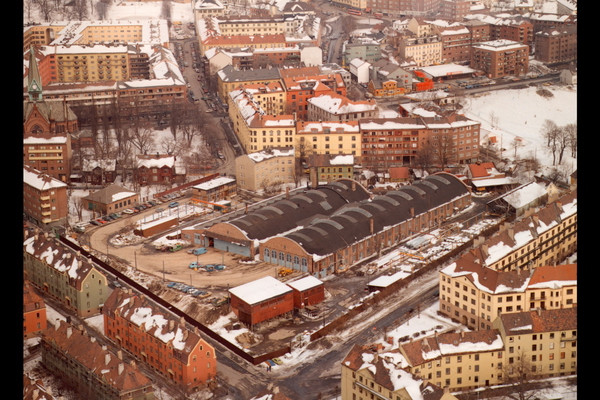 Because in many cases, as here (see below), the complex is built to within an inch or two of the property line. Why you ask? A few reasons:

where I am, the Hessische Bauordnung says in §6 that buildings should stay certain distances apart, then come exceptions (e.g. zoning laws), including that zoning laws can require buildings to go to the boundary and connect with the neighbour building. Come tons of specifics, and finally: further exceptions are possible in particular if fire safety is obeyed. (I really got that knowledge when a neighbour wanted to build right to to the boundary, thinking (as did we) that a firewall would be a valid replacement for the distance. Turned out, fire walls are rather a requirement following from zoning than a choice. If the zoning law says city block or townhouse-style (geschlossene Bauweise) then the building has to go right to the boundary, and in consequence fire safety requires a fire wall: §33 (2) says the outer wall has to be a fire wall if the distance to the next building is or can become in the future less than 5 m. Of course, the Hessian Building Law is not relevant for Oslo. 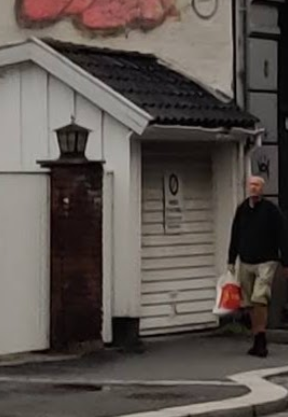 In the USA, in the city of Philadelphia, Pennsylvania, there are vast regions containing what are called "row houses", houses built touching their neighbors on either side, extending for many square miles. I lived for most of my childhood in a "duplex" house, which had a side yard on one side connecting the front and back yards, and on the other side was connected to a mirror image house.

Of course each row of row houses has to end where it comes to an intersection between streets. I have often seen rows of row houses ending with house with windows on the side wall at the end, houses that were obviously planned to be the end of the row when they were built.

And there are many vacant lots interrupting rows of row houses, where houses burned down or were condemned and demolished - most of the row houses were built ovr a century ago, giving plenty of time for fires or neglect & decay to cause demolition. The side walls of the houses on either side of such a vacant lot are usually perfectly blank and smooth and have no openings. Apparently either the owners of those house feel no desire to insert windows and doors in those walls, or else they are legally forbidden to.

And I have have seen examples where the flat side walls of standing houses are not featureless, but have different colored surfaces marking where the floors, and internal walls, and staircases, of the now demolished adjacent houses were. In those cases it is obvious that the wall is flat and windowless because when it was built it was part of two adjoining houses.

And I may add that my mother's family's home in Lancaster, Pennsylvania, is a "row house" or "Town house" with common walls with the houses on either side. It also has a wing stretching back from the front part of the house, which has a common wall with a similar wing on the house next door. But the wing on my ancestor's house is a bit longer than the wing on the neighboring house, and it's wall facing the other property is totally blank as far as I remember - I often slept in the bedroom on the upper floor of that extension and don't remember any windows on that side.

So in the OP's example the wall should be flat and featureless because it was expected that another building would be built next door using that wall to hold up floors, etc., and that building was never built, or because the next door building was built and demolished, and the owner of the surviving building doesn't have the right to put openings in the wall because half the wall is on the neighboring property, or because when it was built regulations required a firewall with no openings on the end of a row of houses.

Not the answer you're looking for? Browse other questions tagged architecture cities or ask your own question.

21
Why does Europe have so few skyscrapers compared to East Asia?
27
Why didn't the Greeks or Romans have an Industrial Revolution?
31
Why does the Great Wall of China follow such a bendy route?