This photo was in my great-aunt's album. She only identified it as "he came from Germany", but the picture was taken in Bunzlau, which I believe to be in Poland. I am guessing it is from around early 1800s. 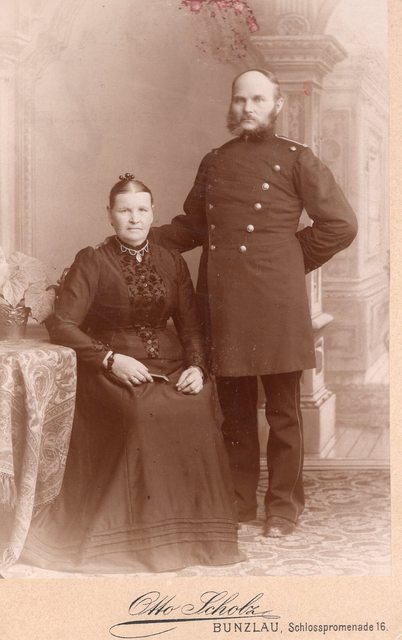 Bunzlau is now in Poland and called BolesĹ‚awiec. Back then it was in Silesia, thus Prussia and therefore in Germany.

The photographer is given as "Otto Scholz", a German, not a Polish name, just as the address given is decidedly not Polish.

His studio is given as:

Meaning that the franchise was present in two locations in Silesia, both with a very small Polish minority at the time, most of the inhabitants being Germans.

For the presumed or likely timeframe of this photo, we have to concede that there were a lot of Polish people around, generally, but not that many in Bunzlau. And that there simply was no Polish state, and hence no 'Polish uniforms' possible.

While the individuals may well be of Polish ancestry, ethnicity or language, although not very likely, given the location and clothes, just being pictured here by a definitively German photographer, at least the male was most probably in official German state service.

This information of photographer, location and date was often printed to the backside of his photos:

The style of facial hair of that gentleman is reminiscent of the style of beard worn by the first German emperor Wilhem I. Who was in (that) office from 1871â€“1888. Many males tended to emulate the current emperor's facial hair style, just like later with Wilhelm II:

The "Kaiser-Wilhelm beard" advertised by the Emperor's FranĂ§ois Haby court coiffeur as "It-is-achieved beard" underlined the strikingly masculine message of his uniforms.

Furthermore, the garb worn by him is a double breasted tunic called litewka ('the Lithuanian'). That is 'the king's frock', in terms of a presumably dark (Prussian/royal) blue. But he shows just very slim shoulder decorations and virtually no military awards. While the buttons may show some more small hints, it seems probable that this is not a directly military uniform, as surprising at that may be for a Prussian, but a civilian one. Whether a train conductor, policeman or postman. Though probably not of the lowest ranks.

For a comparison of this style, an old Bismarck with a toned down array of military decorations in double breasted Prussian tunic:

Notice that even civilian uniforms of this type tended to increase the broadness of the shoulder decorations â€“ in this picture basically just a chord with a button â€“ to shoulder boards. Here an example for firefihgters from 1890:

The Prussian military staff in the Franco-Prussian war of 1870â€“71:

Modern re-enactment but authentic police-uniforms, showing the range of colours:

And one variation as worn by Prussian state railway personnel before 1918:

While it says in the question that photographer Otto Scholz lived from 1844â€“1908, his lexicon entry gives him as active in Bunzlau as 1872â€“1908 (at the present day Polish adress of Promenada Zamkowa 6
The photographer himself in younger years btw:

Apparently, Ottos brother Robert, the other son of Eduard, and representing the GĂ¶rlitz branch is even called 'a photographer legend'â€¦ A part of Otto's oeuvre is online here.][12] Meaning: it looks like the originals from that studio remained largely in place in that town and are now accessible to a user on Faceboock. If someone also on Faceboock would like to contect the user 'BolesĹ‚awiec stare fotografie' one might even get to the exact name of the individuals pictured?

That makes these conclusions most probable: late 19th century (from 1872â€“1890, with a tendency towards the earlier part or middle of that period) Prussian German, civil servant.

(While this scan is already quite good: for more details, I'll request a scan of the backside, more information on the provenance: any clues as to who this might be, other photos found with it etc; a more detailed scan of the female, her book, her jewelry, the clothes. Same for the man: a closeup of the shoulder-part, collar, buttons, cuffsâ€¦)

Not the answer you're looking for? Browse other questions tagged germany identification uniform poland photograph or ask your own question.