What systems of opression did colonial South America utilized to acculturate indigenous peoples, compared to the ones used in North America? [closed]

Ask Question
Asked 3 months ago
Active 3 months ago
Viewed 78 times
-5
Closed. This question is off-topic. It is not currently accepting answers.

After reading and writing about boarding schools (and prisons) of acculturation here in North America, where Indigenous peoples were forced into Western ways, I am left wondering: Did these systems exist in South America? or were these ideas brought here by English ideals, that the Spanish did not share?

I'd highly suggest reading a past question here, Why does Latin America have a higher number of surviving Native Americans than North America?

The most famous exemplars of the cultural genocidal efforts of American Indian Boarding Schools happened in the USA, and to a lesser extent Canada. As pointed out in that question, Canada and the USA are unusual in the Americas in their low percentage of modern indigenous population. This is likely due to their climate being quite suitable for the temperate crop package used by European colonizers. 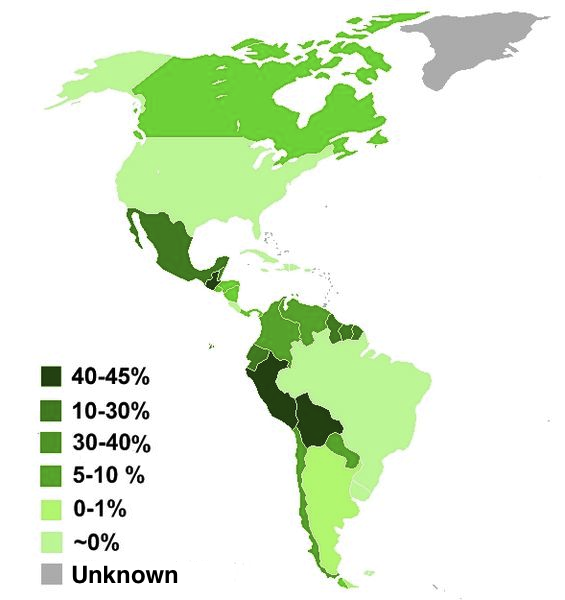 Unusual, but not unique. Therefore, if you wanted to find parallels to their "acculturation" efforts, the logical place to start looking would be in countries with similarly low modern indigenous population contribution. Namely, Brazil, Uruguay, and Argentina.

Uruguay, with the lowest modern percentage solved the issue in a distressingly straightforward way: They killed all but about 500 of their native population, and made most of the rest servants. To be fair, by that time disease had done most of the heavy lifting.

In Argentina there was a large plains area that developed a native horse culture, which Europeans eventually cleared out through warfare, like they did North America. Government policy from that point forward appears to have been to pretend the remaining natives didn't exist at all (a policy that's been called "invisibilization"). This is in fact not too far off of how they were treated in the US, once nearly all of their useful land had been acquired by the settler's society.*

Brazil has a much more ... er ... uneven history (compared to the company, "uneven" is probably a complement). There's the usual history of (mostly) unintentional disease-based genocide, of course. However, they have a government agency that was created in the early 20th century to help protect and preserve native culture, and their 1988 constitution affirms the rights of native peoples to live on their traditional land and practice their traditional ways of life. However, that agency has a history of getting captured by land-hungry interests. The country itself periodically gets taken over by authoritarian governments, who tend to show a distinct lack of regard for anything having to do with native peoples other than their lands.

* - For example, the narrative of US history lined out in the recent US Supreme Court McGirt opinion essentially says that the US, rather than bothering to disestablish the native reservations in Oklahoma, after forcing allotment of the land simply pretended they didn't exist for the last century.

It was called "work," that is, putting Indians to work on Spanish farms, mines, etc. It was a means of extracting labor from them, while teaching them the rudiments of the Spanish language (and training "overseers" in the indigenous language), as well as other aspects of "modern" society, such as using metal "coins" for money (some Indian civilizations used cacao beans or other perishables).

The Spanish reinforced this process by sending missionaries to convert Indians to Christianity, and establishing missions These missions ran schools for both the formal and informal instruction of the Indians, particularly children.

These, and other attempts to integrate Indians into Spanish society gave them a "stake" in the system. While many died under various forms of mistreatment, more survived than in North American societies, which tried to expel them, instead of "civilizing" them. Put another way, while a few of the more fortunate North American Indians were sent to "Anglo" style boarding schools to satisfy English ideals, comparable schooling was much more widespread in South America. That was in large part because there were several large, competing Catholic orders there all working (in different ways) to civilize the native Americans.

Not the answer you're looking for? Browse other questions tagged colonial-america native-americans north-america oppression or ask your own question.

34
Why does Latin America have a higher number of surviving Native Americans than North America?