Did Helsinki have higher standards of living than Saint Petersburg when it was a part of the Russian Empire?

For over a century Finland was a part of the Russian Empire. It seems that overall Finland was significantly richer than Russia proper in the early XX century (look at these estimates). Was Helsinki in specific more developed that Saint-Petersburg? If so why didn't the Russian elites move to Helsinki? Also were there other instances when a colony was more developed that the metropole?

Firstly, this greatly depends on how the GDP was back-calculated for those times. This is a difficult task as I've described elsewhere here. 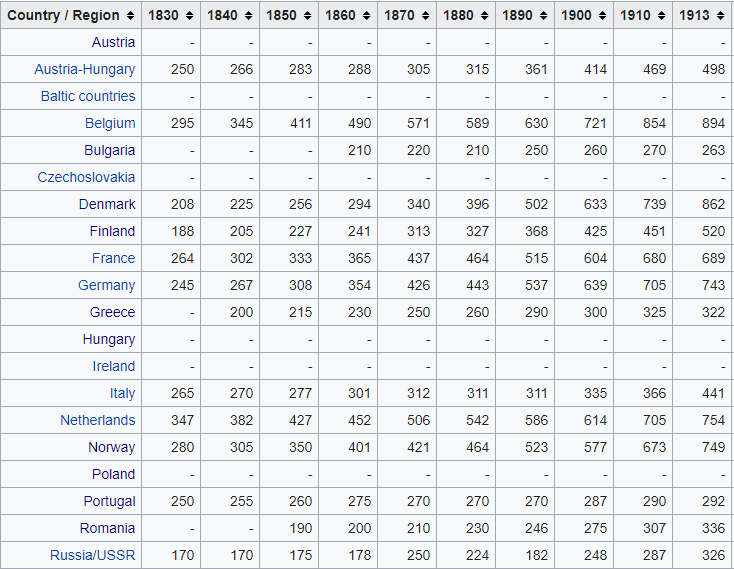 I quickly graphed the above for a more illustrative version: 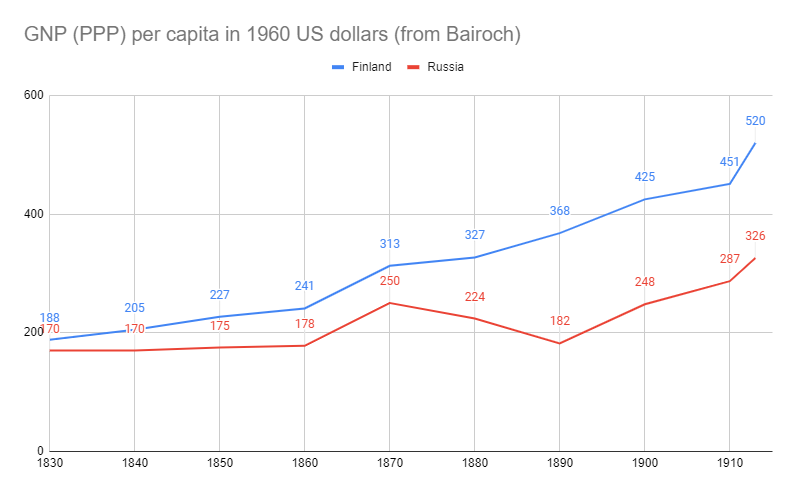 If we look at this alone, it does look as if the people of Finland would have experienced a 'better' lifestyle (let's leave defining this out of the scope of this answer).

The 1897 census is useful in thinking through the above:

Finnish population is not counted per se as the census did not take place there (to which we will return later), but it's population for 1897 is given as 2,610,300 people by Statistics Finland. Meanwhile, Helsinki had 66,734 people in 1894 which makes it approx. the 31st city by population in the Russian Empire.

With regards to Finland's development and economy, though Wikipedia laments its agrarian outlook, 'The Finnish economy 1860-1985 : Growth and structural change' is more illustrative:

Significant legislative reforms were carried out in Finland during the 1860s: a prohibitive order on the establishment of steam-powered sawmills was repealed (1857), Parliament was reconvened after an extended adjournment (1863), Finland gained its own monetary unit (1860-1865), trade guilds were abolished (1859, 1868), and so on. These reforms are regarded as being so important that many researchers have even dubbed the 1860s as the decade of Finland's Industrial Revolution, and the legislative reforms as the starting motor of growth.
—Hjerppe, 'The Finnish economy 1860-1985 : Growth and structural change'

The result of these reforms is the growth in prosperity that the above GNP chart displayed in pretty good detail. Meanwhile, Russia proper really was rather agrarian in its outlook—or, well, to be precise, it had more industrialization which was ongoing but this was centralized around the European Russian hub towns (St. Petersburg, Moscow, Kiev, Riga, etc...) while large areas of the country remained agricultural.

However, this hasn't really got us much closer with respect to "Helsinki & St. Petersburg" as opposed to "Finland & Russia". I tried some specific searches, but came up quite empty so I'll go without numbers and only expand on my logic:

Not the answer you're looking for? Browse other questions tagged economy russia finland or ask your own question.

37
Did the Germans purposefully arrange to send Lenin to Russia to start a revolution?
11
Did the Ottoman government rationalize the Armenian Genocide and other instances of ethnic cleansing as a response to Russian expansion?
28
Why was Kaliningrad placed under the Russian SFSR rather than the Lithuanian SSR?
28
Why is the late Russian Empire associated with Byzantium while having little in common with it?
15
Why was Poland subject to much harsher Russification than Finland was?