What was an "alower of Society debts" in colonial America?

"Alower of Society debts" - one of my ancestors held this role in Colonial America. I can find a reference to the role of "tithingman" - but not this... seems self-explanatory, but I thought I'd check.

Presumably you are referring to an extract from the Essex Historical Records on Richard French, born 1675:

Given the other typos and the occurrence of both "allower" and "alower", plus the Middle English usage of "alower" as a synonym for the modern "allower*" (see below), let's take the meaning as being that of "allower".

The position seems somewhat similar to a modern credit agency, as determining if a debt would be allowed.

it's also possible, in light of the Middle English definition below, that it refers to a type of factor, who would co-sign the debt for an additional fee.

From the Concise Dictionary of Middle English A-F:

With thanks to LegionMammal978 for digging up the original source for the OCR above. 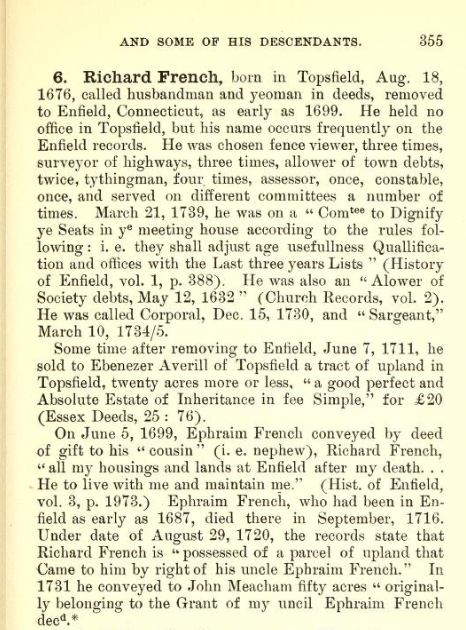 Not the answer you're looking for? Browse other questions tagged colonial-america titles or ask your own question.

8
Jean III de Grailly, captal de Buch's strange title
8
How did Britain govern the thirteen colonies?
10
Why did not Spain manage to keep any colonial possessions in the new world?
15
Was the Somerset Decision in 1772 in England the real underlying cause of the American Revolutionary war?
4
Late 17th century colonial Anglican pastor
7
What was the nature of a widow's personal estate in Colonial America?
4
What's the origin of the legend that this rock formation in America had a 12th century Welsh Origin?