Why were the Marines so badly outnumbered at the critical point at Guadalcanal?

Prior to the battle of Guadalcanal,, the Americans had landed 11,000 men on the island in August, 1942. This compares to the 5,000 or so men that the Japanese had on the island by the first week of September.

But the main body of 3,000 Japanese confronted only 800 Marines on the so-called Bloody Ridge, which shielded Henderson Field, the airbase that was the main point of interest on the island.

Where were the other 10,000 American Marines? Were a lot of them sick, so that their true numbers were in the low thousands, rather than in the five figures? Were a lot of them on Henderson Field itself so that if Edson's battalion was overwhelmed, there would have been a second, last-ditch defense of the airfield? Or was it a case where the available American strength was scattered between several comparably important positions, and the Japanese had surprised the Americans by concentrating on Bloody Ridge, bypassing the other defenses? (The remaining Japanese forces did launch "holding attacks" elsewhere.)

Also, it was a two day battle. After Bloody Ridge had been identified as the target, Edson told his men to hold out a second day, assuming that reinforcements would arrive the third. Why weren't they available sooner?

Question: Why were the Marines so badly outnumbered at the critical point at Guadalcanal? Prior to the battle of Guadalcanal,, the Americans had landed 11,000 men on the island in August, 1942. This compares to the 5,000 or so men that the Japanese had on the island by the first week of September. But the main body of 3,000 Japanese confronted only 800 Marines on the so-called Bloody Ridge, which shielded Henderson Field, the airbase that was the main point of interest on the island. Where were the other 10,000 American Marines?

Short Answer:
As you say, the Marines outnumbered the Japanese who attacked Sept 12-14 1942 12,000 vs 6,000 all these Japanese troops had arrived on the island in the previous three weeks. Yet, the 840 Marines on Bloody ridge were outnumbered, attacked by 3,000 Japanese. 3 Japanese battalions against 1 Marine Battalion. The reason the 840 Marines on Lunga ridge were outnumbered is because the majority of the 12,000 Marines were defending a 10 mile 'U' shaped line. Protecting the airport's most direct routes from a Japanese amphibious landing. The U was intentionally open at the south where dense jungle made an attack unlikely. Which is where the Japanese attacked. The Japanese on the offensive could target weaknesses in the Marine's defenses and concentrate their forces for the attack. The Japanese chose to approach the airbase through the jungle using Lunga ridge, which just a day prior to the attack was not defended. The Marines on the defensive, tethered to the strategic airfield were left trying to cover a wide area, much of which the Japanese could ignore. Before and during the attack on Bloody ridge the Marine's defensive lines (U perimeter) were also attacked at two locations. 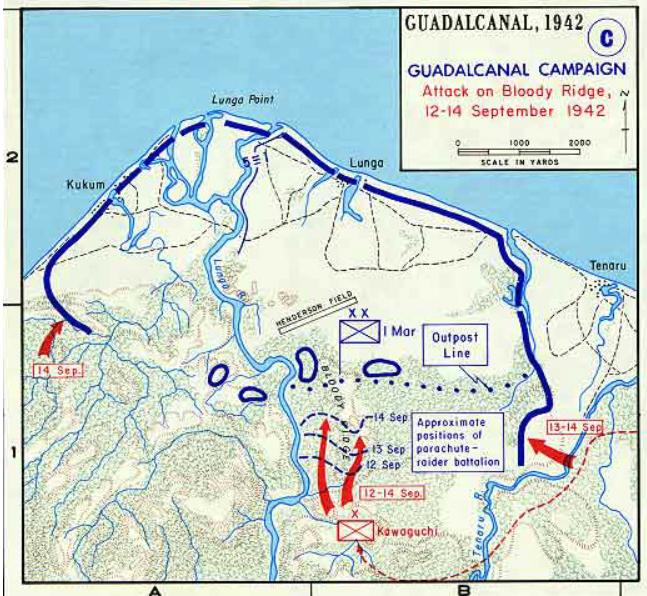 The Marines on Guadalcanal formed a defensive pocket around Lunga Point. It was like a giant upside down U somewhat open at the south where dense jungle made attack unlikely. Or so they thought. The Marine's major concerns were amphibious attacks coming from the sea or along the coast (across the beaches) so that is where most of their defenses were located. Spread out along a 10 mile front that hugged the coast and tried use natural features to bolster its defenses (rivers). As late as the morning of Sept 11, Lunga ridge which would become known as Bloody or Edson's Ridge, south of Henderson Field was not defended at all. The 840 Marines under Lieutenant Colonel Edson were sent there to meet the Japanese 1 day prior to the attack, on the 11th.

Battle of Edson's Ridge
On 11 September, the 840 men of Edson's battalion were deployed onto and around the ridge

Japanese General Kawaguchi had landed on Guadalcanal on August 31st and been placed in charge of all Japanese forces on the island. Between 29 August and 4 September most of his 6000 men had reached the island and were deployed west and east of the Marine's fortifications on Luga Point. The Japanese had lost most of their heavy weapons in getting to the island thanks to the US navy, surface and air assets. These losses were costly contributed to the Japanse defeat. Prior to the attack though the Japanese were not overly concerned with the loss of their heavy weapons because they believed they faced only 2000 men. The Marines on the other hand had attacked and destroyed a Japanese supply depot Sept 8th, and through captured intelligence had a good idea of the presence, intention and size of the japanese force they faced. In response to intelligence captured during this raid, the Marine's moved 3 brigades to potential targets. One was Lieutenant Colonel Edson's brigade of 840 men, moved to the Luga ridge which would be known as Edson's or Bloody Ridge after that.

There the Marines were attacked the next evening Sept 12, 1942.

Not the answer you're looking for? Browse other questions tagged world-war-two united-states japan battle ww2-pacific-theater or ask your own question.

16
Were there reasons for Japan to go to war with the US aside from the US owning Philippines?
13
What were the Japanese defenses for an allied invasion of Kyushu?
72
Why were Navajo code talkers used during WW2?
40
Why didn't Japan take Pearl Harbor when they had the chance?
27
Why were there so few American deaths in the Bataan Death March?
14
How many pens were used by MacArthur to end the final chapter of World War II and where are they now?
11
Were railway guns ever critical in any battle during WWI and WWII?
2
Were the Japanese aware of Desmond Doss's actions?
12
Why didn't the Japanese develop air defenses after the bombing of Tokyo?
5
To what extent is the flora and fauna on Guadalcanal edible?