What is the meaning of this phrase in chapter 64 of the Book of the Dead?

In the aforementioned chapter, one can find the next sentence:

"Come! Look! The leg is adhered to the neck, the buttock is over the head of the Western."

(I'm sorry if this is not a precise translation, English is not my primary language and my book is in Spanish.)

In the footnotes to this chapter, this specific part is deemed as obscure, suggesting it might be related to astronomical positions of certain objects, or to a representation of the dawn. However, because my version was printed in the eighties, I was wondering if this passage was clarified in the years following my edition. However, as this is more like a hobby for me, I don't really know anyone who can answer this kind of queries, and I could not find much on my own. Any reference to this chapter (or other abstruse passages of the book, also) would be greatly appreciated.

(edit: I'm really sorry i didn't post my source. My book is El libro de los Muertos. Edición preparada por José María Blázquez Martínez y Federico Lara Peinado. Editora Nacional, 1984. About the quality of the translation itself, i must say that (as far as my little knowledge on the matter let's me speak) the translation seems to be at least pretty decent: in the footnotes, the editors discuss different translations, mentioning alternative readings also (given by different versions of the chapters), and usually explain very clearly passages that would otherwise be unintelligible for people like me (the book contains a total of around 1400 footnotes, and a 80 page introduction to the subject).

I appreciate the answer already posted, but i'm afraid that version must be an abridged version, because the chapter in my book is 4 pages long. I found on the internet a version that contains the passage, after posting the question (although the chapter itself seems to be abridged), but the translation does not seem to be EXACTLY the same as in my book. The passage can be found in the link https://erenow.net/ancient/the-egyptian-book-of-the-dead/5.php. Specifically, "“things which are said by him, the thigh [of the sacri-” fice] is tied to the neck, and the buttocks [are laid] upon “the head of Åmentet." (For Amentet i assume it means the Theban god, right? Just to be sure, because right now I don't recall that specific compound for Amun. This would suggest that the explanation as dawn would be possible. However, some details make me dubious of this explanation: First of all, even if this explanation is correct, the part of the thighs and the buttocks does not seem totally clear. But, there is something else: according to the Book of the Dead, this chapter was "found" in Hermopolis during the reign of Menkaure (IV dinasty), but i think i read somewhere (lewis Spence' book Egypt) that the identification of Amun and Ra happened mainly during the rise of Thebes , so the identification of Amun and the sun in the IV dinasty would be weird i think. Also, Amun had originally the epithet "Hidden", which is not exactly characteristic of the sun) .As far as the translation i gave, it corresponds to my version.

(In case someone knows sources regarding other obscure parts of the Book of the Dead, i would also appreciate those, everything helps)

I will also leave photos of my chapter, in case anyone speaks Spanish, in order to show that the translation I first gave corresponds to the one in my book (the passage is in the second photograph, in the last lines):

Chapter 64 is an old one and only in Late Period texts, authored by the priests, monsters with legs stuck on the neck and buttocks on the head can be found. The text in question has been copied many times and mistakes are expected. If, however, we have some respect for ancient texts, we have to try to discover what was in the mind of the original author. The ancient Egyptians, as youngsters, were assessed by a tribunal and then had an identity document, the wpt document, issued which was serving as an identification document. The identity of a person depended on his appearance, on the one side, and on the decision of the assessors one the other. That is exactly what the text informs. 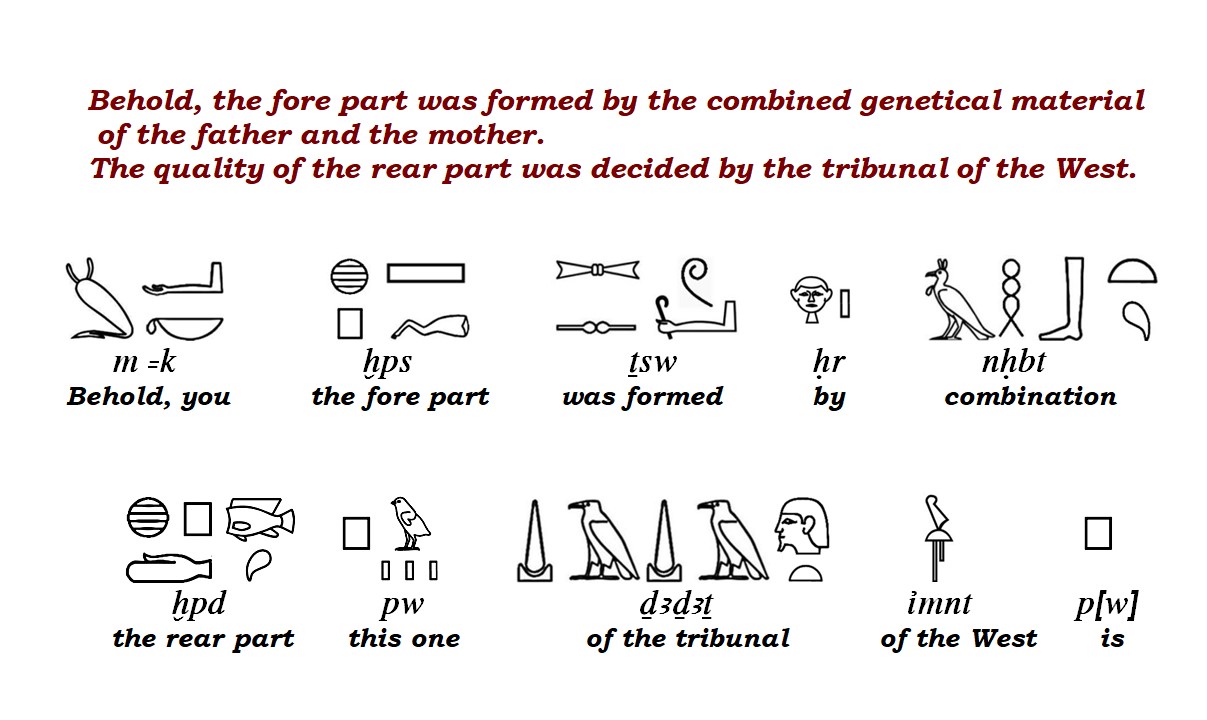 The verb Ts means so much “to join” as “to form”

Especially when genetic material was combined, there was a god to whom this combining was attributed, the god Nehebkau.

And finally, DADAt, means so much “head” as “tribunal”, but when reference is made to the DADAT of the West, then it is certain that the tribunal of the assessors is meant.

Note on sources: The Dictionary entries come from Faulkner’s dictionary. The text is from the papyrus of Nebseni. The translation is mine.

Not the answer you're looking for? Browse other questions tagged ancient-egypt reference or ask your own question.

17
What is the band beneath Nefertitis crown?
16
When did the Egyptians stop wrapping their dead in bandages?
12
What is this ancient Egyptian material called "maklalu"?
0
What's the Ancient Egyptian phrase/word for “Royal Road of Life”? And how would it have been spelt?
24
What are some Chinese sources testifying the extreme weather events of 535-536 CE?
2
What is under the Great Sphinx of Giza?
2
Was garlic an Egyptian deity, based on Pliny the Elder's "Natural History" (Book XIX, Ch 32)?