Can anyone find "War Department General Order No. 207, 3 July 1863" in which "prisoner conduct after capture" was mentioned?

I started following rabbit hole after rabbit hole while I was looking in to the CIA's Detention and Interrogation Program, and I wound up on the report of the Secretary of Defense’s Advisory Committee on Prisoners of War (August 1955), which can be found here: On page 5 of the report (14 of the PDF), the following paragraph appears:

"Prisoner conduct after capture was mentioned in War Department General Order No. 207, 3 July 1863. Among other things,the order provided that it was the duty of a prisoner of war to escape. This order apparently was intended to curb widespread practices of surrender and subsequent parole to escape further combatant service. Prosecution for misconduct was based on three criteria: -misconduct where there was no duress or coercion. -active participation in combat against Federal forces. -failure to return voluntarily. "

Now, at this website I have found a General Orders 207, but it is dated On December 17, 1862. Furthermore, I don't think that is the whole General Order, but I can't find the full text.

G.O. 206 is a direction to the commanding officers of regiemtns, and of unattached battalions, independent companies or batteries, and surgeons in charge of hospitals or detachments regarding G.O. 72 of March 24, 1863. 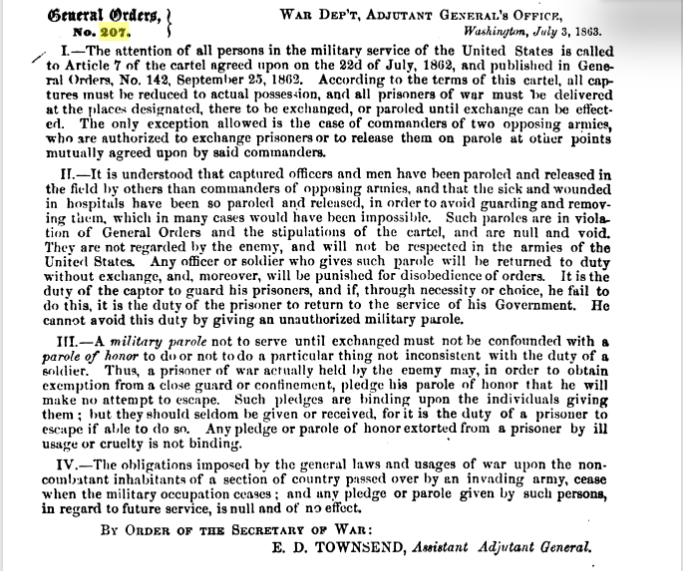 with the plain text:

Washington , July 3 , 1863 . I . - The attention of all persons in the military service of the United States is called to Article 7 of the cartel agreed upon on the 22d of July , 1862 , and published in Gene ral Orders , No . 142 , September 25 , 1862 . According to the terms of this cartel , all cap tures must be reduced to actual possession , and all prisoners of war must be delivered at the places designated , there to be exchanged , or paroled until exchange can be effect ed . The only exception allowed is the case of commanders of two opposing armies , who are authorized to exchange prisoners or to release them on parole at otaer points mutually agreed upon by said commanders .

II . - It is understood that captured officers and men have been paroled and released in the field by others than commanders of opposing armies , and that the sick and wounded in hospitals have been so paroled and released , in order to avoid guarding and remov ing them , which in many cases would have been impossible . Such paroles are in viola tion of General Orders and the stipulations of the cartel , and are null and void . They are not regarded by the enemy , and will not be respected in the armies of the United States . Any officer or soldier who gives such parole will be returned to duty without exchange , and , moreover , will be punished for disobedience of orders . It is the duty of the captor to guard his prisoners , and if , through necessity or choice , he fail to do this , it is the duty of the prisoner to return to the service of his Government . He cannot avoid this duty by giving an unauthorized military parole .

III . - A military parole not to serve until exchanged must not be confounded with a parole of honor to do or not to do a particular thing not inconsistent with the duty of a soldier . Thus , a prisoner of war actually held by the enemy may , in order to obtain exemption from a close guard or confinement , pledge his parole of honor that he will make no attempt to escape . Such pledges are binding upon the individuals giving them ; but they should seldom be given or received , for it is the duty of a prisoner to escape if able to do so . Any pledge or parole of honor extorted from a prisoner by ill usage or cruelty is not binding .

IV . - The obligations imposed by the general laws and usages of war upon the non coinbatant inhabitants of a section of country passed over by an invading army , cease when the military occupation ceases ; and any pledge or parole given by such persons , in regard to future service , is null and of nö effect .

BY ORDER OF THE SECRETARY OF WAR :

Not the answer you're looking for? Browse other questions tagged american-civil-war prisoners-of-war korean-war or ask your own question.