When was the last time the US had the highest GDP per capita?

I never associated the United States with the label of the richest country in the world so it greatly surprised me that according to some estimates there was a time when the U.S. had the highest nominal GDP per capita.

What was the last year this was true? To exclude the ministates let's only consider the countries that have at least 0.01% of the global population. Was it a great deal to Americans when they lost the title?

Using your criteria, and following this Wikipedia article, which uses World Bank estimates, that was 1973, the year of the Arab oil embargo following the Yom Kippur war.

The United Arab Emirates was formed in 1971, and when the World Bank started reporting this statistic for that country, it immediately occupied the top spot, with a GDP per capita of $7445 compared to the US's $6462.

The UAE may be a poor example, because the individual oil-rich emirates of what was called the "Trucial States" likely had high per capita GDPs. And with a population of 467,451 at the time, the UAE just barely squeaked in at a little over 0.01% of the world's 3.9 billion population.

Update: I've addressed OP's question using the criteria specified, but I do wish that @JMS hadn't deleted his frame-challenge answer, because GDP per capita has limited usefulness as a measure for many reasons.

Honestly, this question kind of surprises me. The U.S. is currently one of the richest countries in the world, so I'm not sure why it would be surprising that this was also true in the past.

Spencer's answer answers the posed question in terms of nominal GDP/capita, but that ignores purchasing power (i.e. relative currency values and what actual goods and services they can by in the country in question.) When comparing things like household income or GDP/capita, macroeconomists usually use Purchasing Power Parity (PPP)-adjusted numbers to get more accurate comparisons of the real goods and services that the stated nominal figures are actually capable of purchasing. For example, nominally making $120,000/yr in one place instead of $100,000/yr in another is not a benefit if goods and services cost 40% more than in than in the other place.

Both the International Monetary Fund and the World Bank issue estimates of the PPP-adjusted GDP/capita of most of the world's countries, as Wikipedia lists here.

As you can see from the list, the only countries higher than the U.S. on either list are oil-rich (Qatar, Brunei, Norway, UAE, Kuwait,) geographically tiny city-states (Singapore, Luxembourg,) corporate tax havens (Ireland,) or Switzerland.

Of course, especially in oil-rich countries, it is often the case that a relatively small percentage of society actually ends up benefiting much from that gross product. That's not as true in Norway as in the others, but it's still true enough that average household disposable income is much less than in the U.S. (more on that later.)

Ireland is a special case all its own. In the case of Ireland, much of that gross product doesn't actually belong to Irish at all, but rather to foreign multi-national corporations that claim much of their easily-relocatable income there due to Ireland's very low corporate tax rates (and these corporations are, as you may have guessed, primarily American.) This effect was messing so much with Ireland's statistics that the Central Bank of Ireland itself recently created the new statistic of Modified Gross National Income (Modified GNI) specifically to adjust for this. The Central Bank of Ireland found that their GDP was inflated relative to the Modified GNI by approximately 62% by the income of mostly-U.S. companies claimed there for tax purposes in 2017.

To highlight just how far the U.S. is ahead of most countries in terms of PPP-adjusted GDP per capita, when applying PPP adjustments at the state level, all 50 U.S. states individually rank higher than the United Kingdom.

How much of that actually goes to households?

Fortunately, there are better metrics for measuring how much of that income actually flows to households. The Organization for Economic Co-operation and Development (OECD), an inter-governmental agency based in Paris and consisting of most of the world's developed market economies, publishes lots of economic statistics on its member countries. One of those statistics is Household Disposable Income, which each member nation computes according to the standardized System of National Accounts.

OECD's Household Disposable Income metric adjusts household incomes for the various different factors that normally make incomes difficult to compare between different nations, include taxes, the value of goods and services provided to households by the government (including any government pensions, healthcare, education, etc.,) as well as factoring in purchase-power parity adjustments. No comparison will ever be perfect, but this one is likely about as close as it currently gets for comparing actual standard of living of households among the various OECD countries.

(As a side note to prevent potential confusion, "standard of living" is an economic measure meaning "goods and services available to a household" and should not be confused with the related measure known as "quality of life," which is a more intangible and subjective 'happiness' measure. Obviously, money and happiness are not the same thing, so those measures are not equal.)

Here's how the various OECD states currently stack up in that measure: 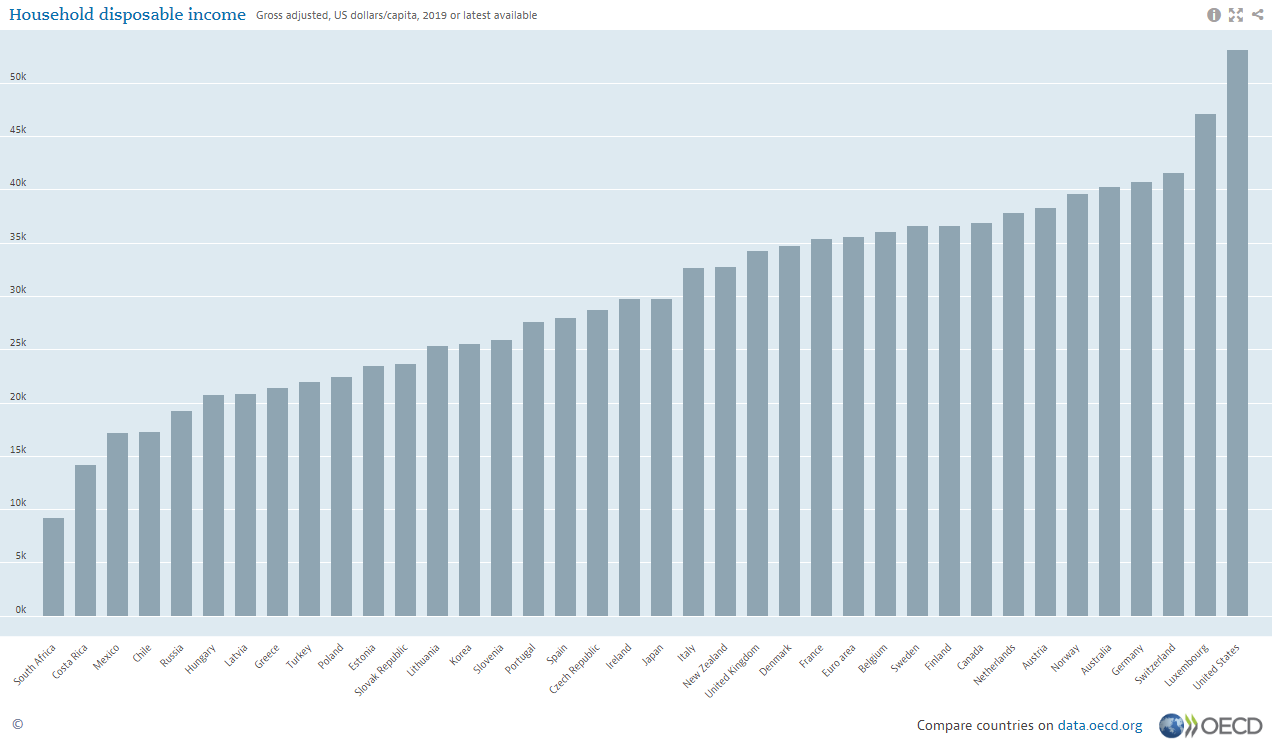 The data may be a bit difficult to see with that font size, but here are the top 10 and the Eurozone as a whole:

When was the United States last the richest country?

So, if the primary question here, as hinted at in the question body, is really when was the last time that the U.S. was the richest country in the world, at least in terms of actual household standard of living and excluding geographically tiny city-states, the best answer is probably right now.

Arguments could be made for it being a close #2 behind Switzerland if going by PPP-adjusted GDP/capita alone and ignoring tiny and/or oil-rich countries. If going by this, it's hard to say when the U.S. was last ahead of Switzerland in PPP-adjusted GDP/capita, as the wiki list on that only goes back to 1980 and Switzerland has been ahead for that entire time. However, the gap has dramatically closed in recent years (down to about $700 in 2019) and IMF's 2019 estimates projected that the U.S. would pass Switzerland in 2021 (though my personal, non-economist guess is that the COVID-19 pandemic will likely end up delaying this.)

Since 1980, Ireland and Switzerland are the only non-tiny and non-oil-rich countries to have had a higher PPP-adjusted GDP/capita than the US and that has only been the case for Ireland since Apple made some accounting changes in 2015 to shift more of their income to being declared there.

Or 2001 (overtaken by Ireland in 2002) if we exclude oil states and countries with population under 1M.

Or now if we exclude oil states and countries with population under 10M (the US overtook the UK in 1871 and has been #1 ever since).

Every year from 1991 to 2016 (last year of this dataset), Luxembourg has been ahead of the US and other countries (e.g. Ireland, Qatar, Singapore) have also overtaken the US.