How did Britain and Russia block the railway in Iran?

[...] both Britain and Russia promoted only the technology that furthered their own interests and blocked such inventions as the railway, which might have benefited the Iranian people, in case it endangered their own strategic positions.

Did Britain and Russia block the introduction/construction of the railway in Iran? How did they do so?

Did the railway arrive later in Iran than would've been expected in the absence of British and Russian influence?

Anglo-Russian Rivalry was a factor in the slow development of Iranian railways.

An online source drawing from an article in Railway Magazine (Jan 1963), by M.A. Baker, provides the following background information which indicates that the Persian government was itself, in part responsible for the slow development of rail in their country:

Until the 1930s, Iran was relatively isolated, but from around 1865 various European Countries had sought concessions to construct railways but the Imperial government continued to value isolation above integration.

Baker says that, “Shah Naser-ed-Din … was so delighted with railways that he determined to have one built in Iran.” [1: p21] Shah Naser-ed-Din reigned from 1831 to 1896. He was the first modern Iranian monarch to formally visit Europe. He wrote travelogues about his trips, that also were translated in foreign languages. 2

Shah Naser-ed-Din called on a French engineer and concession hunter, Fabius Boital, to build a line from Tehran to the shrine of Abdul Aziz at Rey, 6 miles south of the city. He also received a concession to build tramways in Tehran.

It would appear, in addition however, that the Russians and British did also hinder the development of railways in Persia due to their shared concerns about the introduction of a "speedy means of communications connecting the north and south of Persia". It also appears from the following source that the difficulty in actually building a railway in such a remote location, and the likely need to use ports and infrastructure controlled by Russia or Britain to enable construction to proceed was a limiting factor, which enabled those two countries to restrict development. 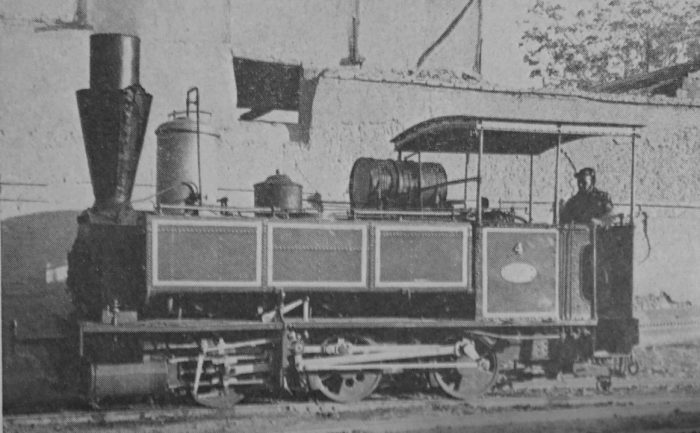 During the three decades between the 1850s and the 1880s various French, Belgian, British, Russian and American concerns attempted to introduce railways to Persia, but these did not materialize, either due to lack of adequate capital or because of the Anglo-Russian rivalry (Jamālzāda, pp. 87-88; Lorini, pp. 158-59; Maḥbubi Ardakāni, II, pp. 321-24). In December 1886, a French engineer and concession-hunter by the name of Fabius Boital received a concession from Naṣer-al-Din Shah to build a small Decauville railway from the capital Tehran southwards to the Shrine of Šāh ʿAbd-al-ʿAẓim, a popular site of pilgrimage in Ray, a distance of about 6 miles. In addition, Boital received a concession for the construction of tramways in Tehran (Churchill, 27 Aug. 1888 p. 16; “Memorandum on Persian Railways”). Probably due to a shortage of money, Boital sold both concessions to a Belgian company named “La Société Anonyme des Chemins de Fer et Tramways en Perse,” founded in Brussels on 17 May 1887. The company had a capital of 2 million francs (“Acte,” p. 865).

The rail concession provided the Belgian company with the exclusive rights to construct and operate a railway line from Qazvin to Qom through Tehran and Šāh ʿAbd-al-ʿAẓim for 99 years (“Concession,” p. 45). The president of its executive board was Edouard Otlet (1842-1907), a Belgian international businessman with a great deal of experience in railroad construction in both Europe and the United States.

Although the large number of pilgrims (over 300,000 per annum) who visited the shrine (Curzon, I, 617) promised handsome returns for the company, its executives wanted much more: a railway line connecting the Caspian Sea and the south, and passing through Tehran (Otlet à Barbanson). This did not materialize because speedy means of communications connecting the north and south of Persia ran contrary to both British and Russian interests (d’Erp à Caraman Chimay; Wolff to Salisbury, 25 April 1890).

The task of constructing the line was very difficult since the Belgian company needed to transfer all the necessary equipment - rails, 21 wagons, 4 steam locomotives, etc. - all by sea from Antwerp to Batum on the Black Sea, then by land through the Transcaucasian Railway to Baku, then by sea again to Anzali on the Caspian Sea, and from there once more by land and on the back of animals, through difficult terrain, to Tehran through Qazvin. The weather, customs clearance, shipments and re-shipments, were part of the other difficulties, which the Belgian team, headed by the engineers Guillon, Denis, and Julien, had to face (“Le premier chemin de fer en Perse,” p. 1; “Rapport,” pp. 3-5; Beyens, p. 14; Curzon, I, p. 617). In order to minimize the difficulties involved in the cumbersome process of shipping from Belgium to Persia, Denis established a workshop in Baku for packing the material from Belgium, bought animals from Tbilisi for transportation, purchased part of the rails from Russia, built boats for river transport, and employed local workers for maintaining the roads. By these steps he was able to transfer more than 1,000 tons of equipment from Raštto Tehran, but these measures proved very costly. (“Rapport,” pp. 5-6; Curzon, I, p. 617).

Railroads i. The First Railroad Built and Operated in Persia (Encyclopedia Iranica)
Details of the various references cited above can be found in the link.

The argument is that neither Britain nor Russia wanted the other to construct a railway.

Starting in the 1870s, both Britain and Russia each pressured Iranian monarchs to grant it a railroad concession and to deny one to the other power. As a result, Iran’s interests were completely ignored, and, with the exception of several insignificant branches, railroad construction was under a moratorium until after World War I

After World War I there seems to have been a problem with different priorities of the British and of the Shah. The British would have supported an East-West railway (probably south of the Alborz mountains, e.g. Tabriz-Tehran-Mashhad?), while Reza Shah wanted a north-south railway, from the Caspian Sea via Tehran to the Persian Gulf, because he was convinced that would be more useful for Iran's economy. Reza Shah got his will, but apparently Iran had to pay everything on its own, which may or may not have been different if he had followed the British proposal.

That said, there are some major topographical obstacles both on the northern and on the southern branch of the railway. The section between Andimeshk and Dorud is a bit of a tourist attraction because of the spectacular views and the huge amount of tunnels. Spectacular views and lots of tunnels means building this section must have been really complicated and costly. It also means that much of this section is single-track and that curves are rather narrow. So the amount of goods that can be transported on that particular railroad must be rather limited.

52
Why did Britain not purchase Alaska when Russia had it up for sale?
4
Past US invovlement in Iran and Iraq
4
Did Iran host anti Soviet Afghan factions during the 1980's?
11
Were Israel-Iran relations better in the 80s? What changed?