I was told that this would be a German uniform from WW1. 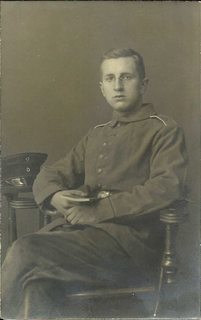 It is a German uniform of that era.

The biggest hints are the cut of it, as visible, the classicist font used for the number on the shoulder boards, and most important: the two cockades on the hat.

The upper cockade would have been in imperial colours (black white and red) and the lower in the colours of the issuing state. As the lower one would be of higher significance here: all I see is the sequence dark, bright, dark. If it is 'black, white, black', it's for Prussia, but very similar candidates from such a black&white photo would be:

As to the age of this man, it is not the usual, but also not imposssible for him to be that young. Compare:

Paul Gottfried Ernst Mauk (* July 19, 1900 in Waldkirch/Breisgau; † June 7, 1915) was the youngest German war volunteer of the First World War. He fell on the Lorettohöhe/North France near Arras.

At the outbreak of war in August 1914, the brothers volunteered to join the army, and both received the certificate "war-usable for all weapons". Paul was above average for his age, so the 14-year-old Obertertian could become a soldier. The brothers began their service on 1 October in Recruit Depot IX in Freiburg. In the company to which Paul was assigned, he was considered the best marksman.

A picture of Mauk, showing the same features of cockade, shoulder board numbers and young age:

(src, uncropped at hat in print)

Unfortunately, the cuffs and the buttons could give more information, but the resolution on the front buttons is too low and the specifics of the cuffs invisible to my eyes. Whether they are Brandenburg (three buttons), Swedish or Saxon style seems undecidable. While Brandenburg was the most common style of the Prussian army, they also used the others. ('Ideal types' of cuffs.)

Observations on (possible) details:
It might be noteworthy that the shoulder straps tended later to conform to war economy needs when issued newly, and became mostly unpiped. From what I do (or not) see on the cuffs, my guess here is 'non-Prussian'. The visor on the hat is also unusual for an otherwise undecorated soldier, as lower ranks in later stages of the timeline weren't allowed to have that on their service cap Krätzchen.
But the belt buckle is yet another hint (although not clear enough in the present resolution): from what is visible, (being 'not too much' here) it might also indicate a 'non-Prussian' heritage. Prussian buckles would perhaps appear more clearly divided in upper and lower half of the outer ring on the buckle plate: the upper saying "GOTT MIT UNS" and the lower half being laurels.

Those armies not under complete and direct Prussian control often had a more evenly appearing plate in its 'outer ring', like Saxon buckles (but the type of crown would be more important anyway):

The description also mentions "Biesen", i.e. an enhanced outer seam on the uniform trousers, and I think I can (barely) recognize a raised seam on that trouser (I wouldn't bet on it, though).

There is a surprising dearth of good images, but here is a link to a stock photo of a Bavarian infantry soldier which comes pretty close to your own picture as far the uniform is concerned (according to the description this is from 1910, so basically the same period).