What can these photos say about my father's service for the British in WWII?

I am trying to determine what my father did in the armed forces during the second world war and have very little to go on apart from these three photos. The first one with three people was taken in Kalyan, India in August 1946 and that is the only info I have. I know he served in British forces, but I I don't know which branch. His name was Douglas Herbert Williams. 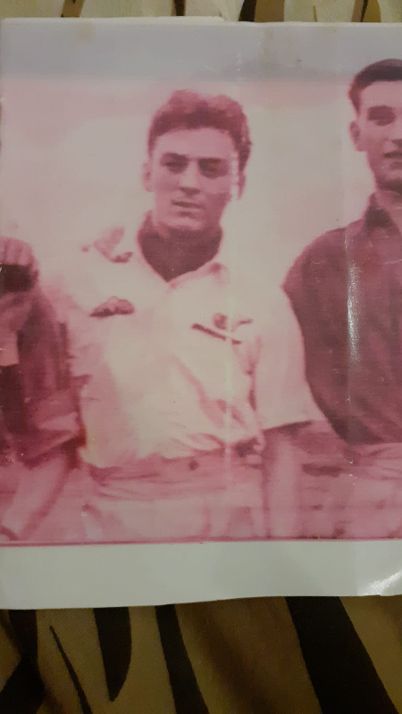 The one thing that seems to be a clue to me is the second picture. The badge on the left of the picture (his right) looks a lot like the parachute wings badge - note the distinctive 'cone' shape in the middle of the wings - which makes it likely (though not guaranteed) he was in the Army. It doesn't absolutely prove it, or tell us anything specific about his unit - various different people would have been entitled to it - but it's something.

Pending any other information, I think it is a decent bet to say he was probably in the Army, not the Navy or RAF, and make a request for his Army records on that basis.

Edit: R Leonard's answer points out that the badge on the left of his shirt seems to be an RAF aircraftman badge - a circle with one upright wing. I think the third picture confirms that they are correct, and my original guess of the Army was wrong - this definitely looks like an RAF uniform.

The hat seems to be a field service cap (see page 6 here, though I'm not quite sure why the white top not blue), and you can just see the tip of an eagle's wing on his left shoulder, which would be found on an RAF greatcoat. The only other thing I can add is that he is probably not an officer; it seems officers would have had a rank marking on the top of the shoulder, which isn't visible here.

You mention that he might have enlisted early. For someone born 1925, he could in theory have left school aged 14 in 1939. However, because civilian ID documents were common during WWII, there was less leeway for just turning up at a recruitment office and saying "oh, I'm 18, honest, sergeant" than there had been in WWI - it's possible, and it certainly happened sometimes, but absent any evidence to the contrary I would assume he went through the normal process and so his dates would be accurate in the records.

One other possibility - did your father have a distinctive name? If he was a Reginald Hebblethwaite then it might be worth searching various of the databases available on Ancestry/FindMyPast/etc, on the off-chance he turns up, but if he was a John Smith it's probably not worth the effort - far too many false positives. Service records per se are not available online, but some ancillary records are - eg the Royal Artillery personnel index cards, a few rolls from infantry regiments, etc. These are subscription services, but if you're in the UK you may be able to get access to Ancestry through your public library service.

In the second photo he also seems to sport an RAF single wing device on the left side – this the correct placement. This could be any of several what are known as brevet devices, but are correctly aircrew flying badges, for examples:

I am sure there were others. I’d suggest you start your search with the RAF rather than the Army. The RAF used the same shaped parachutist badge as the Army. You may wish to peruse https://www.rafweb.org/Menu.htm#badges

Later after 3d picture As Andrew has correctly identified above this picture is assuredly showing an RAF uniform. The white top to his forage cap, I believe, is indicative of personnel under flight crew training.

2
An Austrian Emperor who thought taking his own sweet time about rewarding his underlings was the best way to inspire respect?
4
What can I learn from these WW1 shell cases?
0
What is the statue in the music video for "Sick Boy"?
7
Can anyone confirm the identity of these WWI uniforms?
12
What are these hats and the function of those wearing them (worn by the Russian imperial army at Borodino)?
17
Help me identify this pin?
3
Can anybody please identify the military uniforms in this these photos?
0
Can anyone tell me anything about the markings on these shell casings?