I'm trying to identify the movie of this poster in the front of a movie theater from a picture dated 1904 1917. 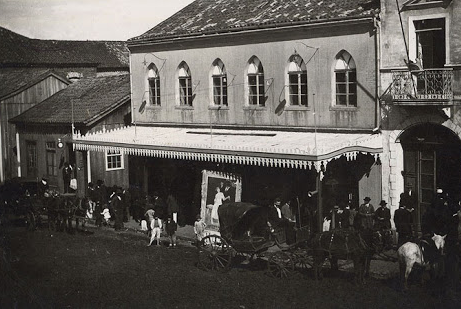 It depicts what looks like a woman sitting on a bench in a white dress, and a man behind holding her arm. Firstly I thought she was fainting, but looking better, there is a bench behind her, she looks up to the right in the direction of the man. He seems standing up looking down towards her. Maybe a vampire? Maybe they are dancing? Unfortunately the resolution won't help. The sign also partially reads ?ANTIFE(M)?. The language is probably Portuguese, Italian or maybe French. 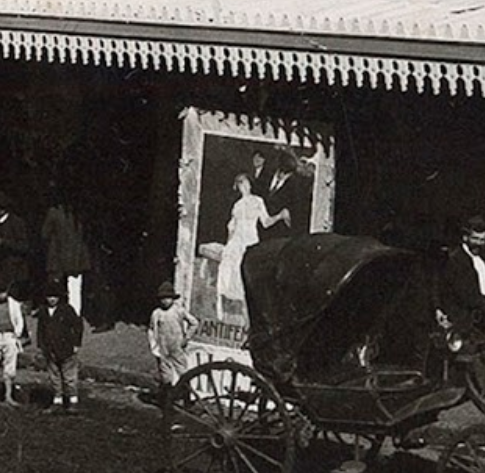 I know there was not many movies around back then. Does anyone have a clue what movie is that?

I don't know the genre of this movie, but it's probably a movie. Because it is a movie theater (the object of my research is this theater) and the sign below reads HOJE, that means "Today" in Portuguese (thanks @NJohnny). I thought I could be fantastical because of the pose of the characters and many movies back then used be fantastical, and there are children at the door, it looks like a vampire to me. But I might be wrong.

In the title I try to describe the image to avoid the use of "this photo" and improve it's searchability.

@Richard suggested it could be Faust and Marguerite by Mellies

But they are in a different position than in that picture.

There is a letter in the front of the mystery word "ANTIFEM". @NJohnny suggested (P R V W). To me it looks like a "K", but at least in Portuguese that would make no sense. This also could be an "A", or less probably, "O" as this is "The" in Portuguese. Looks like there is a small gap between this letter and the next word, indicating this might be a "the". (The antifem...). "Antifemale" was suggested, but to me it looks like a weird subject for a 116 103 year movie, and if so, the title would be smaller than the space in the poster.

Not sure about the movie, but here is the web page of family of the original photographer, and their version of your image

It is a cinema at Caxias do Sul, Rio Grande do Sul, Brasil.

Certainly it makes sense that the word at the bottom of the poster is HOJE (today). The webpage dates the picture to 1904, but, if you accept that the date may be wrong, I have a possibility about the movie title.

Anana Antiféministe, a French movie from 1917, might have been translated as "A ANTIFEMINISTA". The number of letters appear to fit well in the presumed space.

About the date, his bio says that in 1904 his older brother moved to Caxias for medical treatment (due to the better climate), and then he also moved to help his brother. And "A partir de então já começou a produzir fotografias" - "from this time he already started to produce photos"

It means, that if it is from 1904, it must be one of his first professional photos ever.

Not the answer you're looking for? Browse other questions tagged identification movies or ask your own question.

6
Which figure is this a statue of?
13
Who made this Sino-Soviet Propaganda Poster?
7
Can anyone confirm the identity of these WWI uniforms?
11
Who is this, probably royal, teenager?
6
Identify male uniform 1860-80 north Central Europe single breast trouser boot round cap
8
Help on finding out about a sword
8
What regiment is this (~1826-1861) French cuirass cavalry uniform?
4
Can you help identify this European military uniform and medals?
28
Identify the circa 1920 uniform in this photo