How did different asset classes perform during the Weimar hyperinflation?

I read many years ago a story about someone in Germany in the 1920s who had been tipped a US dollar immediately seeking investment advice presumably because it was so valuable. Now, this did not make a lot of sense to me since ultimately it would still have the buying power of a dollar although perhaps with hyperinflation the situation is more complex.

Did stocks simply skyrocket as the value of a company's hard assets go up astronomically (in marks)? If you were a landlord, did you do well or at least do okay because rents went up or were you wiped out because of something like rent control/leases which meant that your tenants were paying you almost nothing for an apartment and you could not evict them?

In general, what sort of assets (besides gold and similar valuables) were good to have had during the German hyperinflation?

Mild inflation may often be good for stock prices, but when people cannot afford basic necessities, there may not be as much money available for speculative investment. In Wiemar Germany, stock prices were volatile but generally declining during the worst of the inflation. Below I've taken a graph from an article by Hans-Joachim Voth and added a thick red arrow to indicate 1923, the peak of hyperinflation. 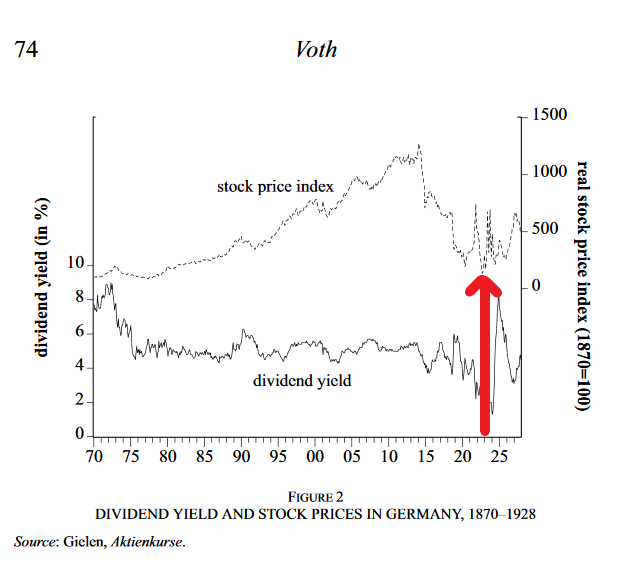 During the hyperinflation, German stocks were often extremely cheap. In November 1922, for example, the capitalization of Daimler Motor Work was equivalent to the value of 327 of its cars. Market volatility was extremely high, with share prices often changing by 30 or even 50 percent per month in real terms. (p.67)

How investors fared overall is a more difficult question to answer. In such a volatile market, I suspect there were both big winners and big losers. Overall, a lot depends on the specific time frame you look at.

13
What goods did Germany trade during the Weimar Republic, and with whom?
8
How/why did Plzeň become the "armourer" for Austria-Hungary?
13
Did the Weimar governments publish revelatory WWI documents?
1
Did Nazi Germany suffer hyperinflation during the war? Why or why not?
3
How common were foreigners in the Weimar republic?
1
How did redenomination prevent the Weimar Republic from further decline?
5
Did Hitler and Nazi officials give interviews and cooperate with the Weimar republic general press?
5
What did people used to exchange for goods during the 1920s German hyperinflation while the official currency was not trusted