Please help me identify the military uniform in picture below

Can anyone identify this military uniform? 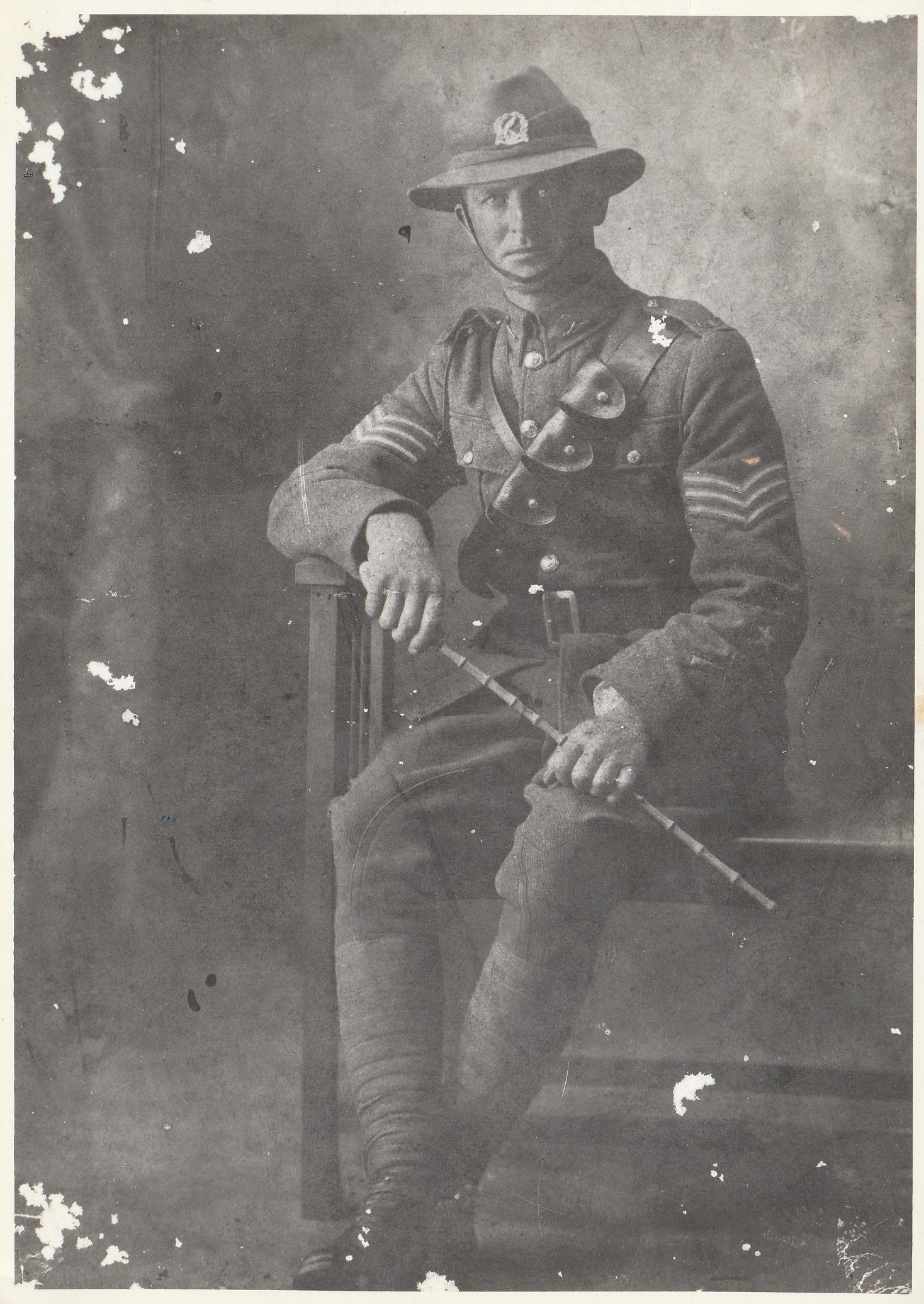 @Jan points out that the uniform and equipment look like the First World War British uniforms, which would mean that they are in a British or British Empire unit, and that the hat seems to be the distinctive one worn by New Zealand forces. Having established he's probably a New Zealander, we can identify his unit in more detail from the cap badge on his hat. New Zealand had specific regimental cap badges, with different units having different badges, and a full set are shown online here.

Skimming through them, the one it most clearly resembles is the 4th (Waikato) Squadron, Auckland Mounted Rifles. This badge has a kaka (parrot) looking right, standing on a branch angled up to the left, inside a wreath. This is a very close match for the one we see on his hat. (His collar has the same badge, if you look closely, without the circular wreath - a kaka on a branch). On his left shoulder we can see the shape of some raised letters; New Zealand mounted units would have a "NZMR" metal badge here, so again that matches.

So we have the country and the unit - what else? He is a sergeant (the three chevrons, V-shapes, on his upper arms) but is not wearing any medal ribbons. This is not unusual - service medals were not awarded until the end of the war - but it suggests it was taken during wartime. His left forearm seems to have another chevron badge on it, near the cuff, and a star near the elbow, though the picture is unclear. There aren't any markings on his right forearm. Oh, and he's not wearing a wedding ring on his left hand...

The right forearm first. This is where we would expect to see Overseas Service Chevrons, which were adopted by all British Empire forces in late 1917/early 1918. These would be worn on the right forearm - but as we can see, there's nothing there. This either dates the photograph to 1917 or earlier, or else indicates that he had not yet seen overseas service.

On the left forearm, things are a little confusing. A single chevron looks like the British good-conduct stripe, or the similar Australian Long Service Badge. But I don't think the New Zealanders ever issued something equivalent - note that eg this 1918 article explaining uniform badges talks a lot about the overseas service chevrons, but doesn't mention any kind of other long-service award.

The other thing that was found on the left forearm was wound stripes (and NZ definitely had those), but these were vertical, along the line of the sleeve, and this one looks definitely slanted. Maybe it's just the fall of the cloth.

So we can be pretty confident about unit and rank, but it's not clear what information we can draw from the rest.

Not the answer you're looking for? Browse other questions tagged war identification uniform or ask your own question.