Why did wagons in the frontier era travel at night?

I'm currently reading 'The diamond diggings of South Africa' by Charles Payton, a first-hand account of a visit to the diamond mines in 1871.

For the first fortnight from leaving Algoa Bay we use to "trek" chiefly by night, seldom traveling after 8 a.m. till about 4 p.m., then perhaps moving on till 9, "tying up" oxen till 12 or 1 a.m., and then going on again till daylight.

When at length, on the evening of the 30th May, after a rather rough crossing of the Modder River in the dark...

It seems to me that it's one thing to travel at night in a modern vehicle with headlights on modern roads which often have streetlights and enough general illumination from nearby cities to see where you're going. But in the frontier era, with no headlights, no city lights to speak of, it would be pitch dark at night; how was travel at night possible? How would you manage to stay on the road, even?

And why? I could understand if the daytime temperature were unbearably hot, but late May in the southern hemisphere is early winter, and the rest of the text confirms that the temperature in that time and place was if anything uncomfortably chilly. What benefit was gained from traveling at night?

Bloemfontein is semi-tropical high plains (1400 metres ASL) with temperatures even in July, its mid winter, not far off what most temperate communities in North America and Western Europe might see in April or September. 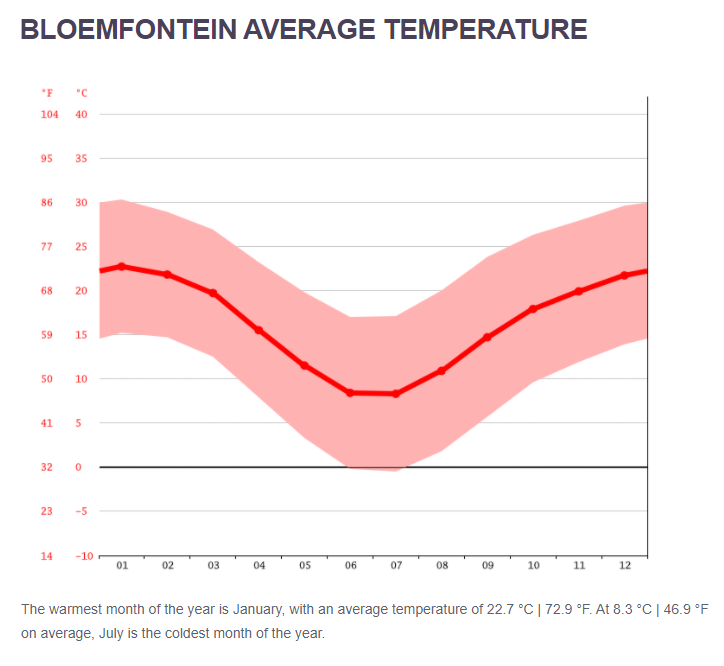 As shown, freezing temperatures are rare even in the depths of "winter".

El Paso Texas is probably the closest U.S. comparable, though slightly further from the equator and not quite as high.

Not the answer you're looking for? Browse other questions tagged 19th-century transportation travel south-africa or ask your own question.

23
When did Hinduism forbid overseas travel?
32
How did people deal with ice on the roads during the horse-and-buggy era?
29
Why did the Soviet Union close its borders and restrict travel abroad?
13
When did covered wagons disappear from America?
2
The speed of sea travel in the beginning of 19th century
5
How long would it take a Victorian to travel from central Germany to the UK?
3
What is the average travel speed for railways between European capitals in the late 19th century?
16
Why did Pausanias travel to Greece?