What was G. K. Zipf's opinion of the Nazis?

Zipf was a professor of German at Harvard. he is credited with inventing the rank size rules that suggested that of we rank many different sets of objects from big to small, they follow a power law. The law has very wide applicability to how cities, incomes, words in a language and so on are distributed. Zipf is sometimes considered to have been a Nazi sympathisers. It isn't clear - there was a post on this list by user 8320 about this - I would like to find out authentication of this and any other sources about Zipf and his life.

Concerning the connection between George Kingsley Zipf and the Nazis, a couple of modern works give us some indication of the source of these concerns. The connection seems to mainly be from Zipf's 1941 publication, National Unity and Disunity; The Nation as a Bio-Social Organism.

The 2017 book The Organization of Cities: Initiative, ordinary life, and the good life by John R Miron, has a section discussing Zipf on page xxvi of the preface. In a footnote (45) he discusses a particularly controversial section of Zipf's earlier work.

In a particularly suspect agrument, Zipf (1941,p.197) presents the combined city size distribution for greater Austria-Germany-Sudetenland in a way that appears to justify the Nazi policy of Lebensraum in the lead up to World War II.

This connection can also be noted in a review of the book published in The American Political Science Review, vol 35, Issue 6 December 1941 pp 1178-1179.

...and that Germany suffered disastrously from the Versailles Treaty, but that, as a result of her acquisitions in Austria, Czechoslovakia, and Poland, she has been approaching normality.

Another book can also be found discussing Zipf's application of his power law to social situation in 1941 Europe. Psychomythics: Sources of Artifacts and Misconceptions in Scientific Psychology, by William R. Uttal. This book, in a footnote on page 51 seems to be referencing the same thing:

It does not require too much reading of Zipf's last chapter to appreciate both his explicit anti-Semitism and his pro-Nazi outlook. Particularly dangerous was his justification of Germany's aggression in terms of his empirical law.

Since a readable copy of this work has come up (Thanks @Sempaiscuba), I can include some direct information from the source (emphasis mine):

This is from the very first use of the name Hitler within the book, pg. 151. This disease-cure analogy is carried on later in the book (since Zipf's law is also applied to linguistics it might be worth noting that the word cure comes up 51 times in this book...):

It is a fair question to ask today whether the European war of September, 1939, should be viewed primarily as a disease or as a cure of diseased con-ditions, and whether Mr. Hitler is primarily a source of infection or a symptom of an infection, — a symptom that will pass as the infection of disequilibrium recedes.

(emphasis mine). This 'disequilibrium' is shown in his chart on page 197 where he shows the effect of Lebensraum, comparing the curve representing city population dynamics before and after May of 1939. 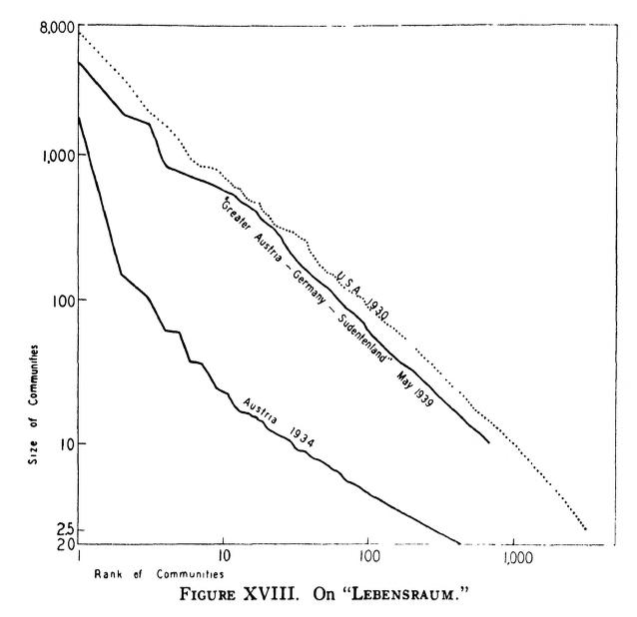 The paragraph before this chart states the following (emphasis mine):

In view of the marked differences between 1934 and 1939, we cannot but conclude that somehow, during this interval, the assumed social-economic forces involved in this total situation suddenly moved towards greater social-economic equilibrium.

Ok. One more. (sorry for the multiple edits) From page 369 (of course emphasis is mine):

Not the answer you're looking for? Browse other questions tagged world-war-two nazism or ask your own question.

18
Was there ever any doubt which side the USA would join?

19
What historical reasons did the Nazis give for hating the Jews? How did they identify non-practicing Jews?
5
What did the Nazis do with proselytes to Judaism?
13
Did Peron shelter Nazis after WWII?
3
Why did the Nazis collaborate with the Ustaše?
3
Did the Balkans campaign delay Operation Barbarossa for the Nazis and was it therefore an important reason why they lost against the Soviets in WWII?