Was Wilhelm II aware of the Franco-Russian Military Convention 1892?

The second sentence of Article 1 of the Convention reads,

If Russia is attacked by Germany, or by Austria supported by Germany, France shall employ all her available forces to attack Germany.

All the clauses enumerated above shall be kept absolutely secret.

If the secrecy were somehow broken, and Wilhelm II was aware of the treaty, then the enaction of the Schlieffen Plan would seem to be a genuine case of pre-emptive defence.

If he didn't know about this, or at least have strong suspicion along these lines, why enact the Schlieffen Plan on the day (August 1, 1914) he declared war on Russia?

Do we know if he was aware?

Yes, it was assumed that an alliance was being formed during the visit of the French fleet (23rd of July 1891) in Kronstadt.

Due to the 2 week celebrations in the last half of October 1893, where a Russian naval squadron made a return visit to the French fleet in Toulon, it was assumed that an military alliance had been completed.

France–Russia relations
The alliance was secret until 1897, when the French government realized that secrecy was defeating its deterrent value.

No source is given for this statement, but it is known that the French president Félix Faure visited St. Petersburg on a state visit in mid August 1897 and was widly publish as an Alliance. 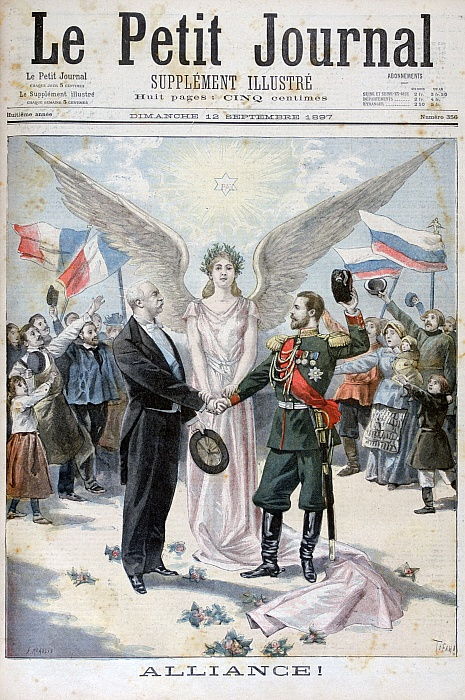 As a follow-up question: do we know, in the context of international military treaties, how natural was Wilhelm II's (or anyone's) inference from this kind of Franco-Russian state ceremony to the existence of an alliance, in particular an alliance involving a provision like Article 1?

Since the initial contingency/deployment plans, that eventually lead to the Schlieffen Plan, was first developed in the spring of 1888, they already had a good idea of what such an alliance would entail.

This plan provided that in the event of a Russian invasion of the Balkans, the German armed forces should be evenly divided between the Eastern and Western fronts; in the west a purely defensive behavior would have been ordered, whereby a declaration of neutrality would have been demanded from France. In the east one would have tried to defeat the tsarist empire militarily.

This plan was eventually replaced by the Schlieffen Plan in April 1913.

Not the answer you're looking for? Browse other questions tagged military world-war-one diplomacy or ask your own question.

9
Can anyone point me to an online version of the 1900 amendment to the Franco-Russian Military Convention 1892?

10
How was the transfer of personnel from British women's military services managed?
1
What was the structure of the Russian army following reforms in 1917?
1
Why was the Russian Federation Military expenditure cut in 1998-1999?
2
What was the commandant of Okhotsk's involvement in Russian-American Company hiring?
16
What was the fastest military draft in the United States?
3
What was the name of the torpedo boat with mechanical problems accompanying the Wilhelm Gustloff?
5
Was the Russian Black Sea fleet strong enough to help with land operations on the southern shore in World War I?
10
What was Wilhelm II's “book about the causes of the war”?
9
Can anyone point me to an online version of the 1900 amendment to the Franco-Russian Military Convention 1892?
0
How was the Cuban military capable of performing African interventions?