I would be grateful if you would take the time to look at the uniform in this photograph and suggest a regiment. I have included some background information and hope you might have some ideas for me to pursue.

This is a photo of GEORGE FELIX ALIX he was Born 24 February 1808 St Germaine de Tournebut, Manche son of Martin Allix and Jeanne Marguerite Dufour and died 28 September 1877 at 40 Rue La Croix, Paris. He married my 3X Great Aunt Susan (Suzanne) Mary Hill in Paris 10 May 1858. Susan was born in England in 1820 her father was Charles Hill, former Troop Sergeant Major 3rd King’s Own Light Dragoons, then Deputy Governor Leicester County Gaol until his death in 1848 and said to be a relative of General Lord Hill – Wellington’s right hand man.

This photo of George was taken by Rene Dagron supposedly around 1861. My assumption is that he was wearing his old uniform in this photo supposedly taken about 1861, and that his military service was actually in the period 1830s to 1850s - considering he was born in 1808. Of course he may have just been in a “dress up” or pretend costume for the photographer.

It was sent to me by a relative along with the matching portrait of his wife Susan. These photos were said to have been displayed at the London International Fair 1862. It is said that George fled Paris on a couple of occasions to escape war – and an old letter says “they lost a lot in Alsace- Lorraine because of Bismark” around 1870 but this would have been way after he had done Military service due to his age. I have recently found the amazing searchable records of Manche which have helped me crack his lineage but can find no military records for him. I know he was well off because he sent a very large sum of money to Susan’s brother artist Charles Hill in Adelaide, South Australia, along with copious amounts of alcohol. Apparently he also had something to do with the St Germain Railway – no luck in research there either. What is clear is that he was sending his assets out of the country to avoid them being confiscated by the 3rd Republic (or something like that.) He was then a Royalist? There was mention of a connection with the Duke du Chambord - hearsay is one thing and fact another. I feel if I can identify this uniform that it might open another avenue. 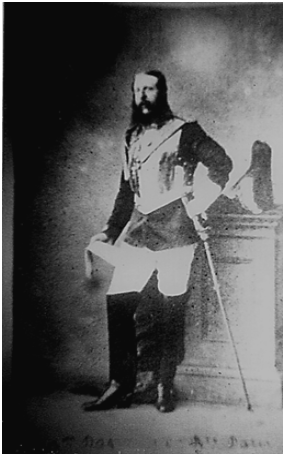 This soldier wearing a metal cuirass with a high helmet indeed belongs to a "cuirassier" regiment. You will find detailed information at Line Regiment n°18.

His long beard looks rather unusual for the time (it was fashionable during the 2nd Empire to wear the same mustache and goatee beard as Emperor Napoleon III). A very likely explanation is that he belongs to the "sapeurs" (English: sapper) branch, who build fortifications, repair or build bridges, roads, etc. during military campaigns. It was a tradition for them, still preserved in the Légion Etrangère, to wear this kind of beard ; such a bearded soldier can be seen on the first painting of the indicated site (with specific axes on the sleeve); the legend of the painting mentions that this "cuirassier-sapeur" was part of the Imperial Guard, explaining maybe why this photo was taken in Paris and not in some remote garrison town.

His right hand glove is held in his hand. Is it a testimony of good manners ("etiquette"), as if he was ready to shake the hand to somebody ?

3
What is this (possibly WW1) officer's uniform and regiment?

18
Who is in this c.1866 photo?
2
What uniform is Alexander Duncan McLennan wearing?
7
What uniform is my Cossack great great grandfather wearing?
15
Based on his service record, where was this soldier deployed in WW2?
6
Identify male uniform 1860-80 north Central Europe single breast trouser boot round cap
16
What uniform are these gentlemen wearing?
3
Can anyone help me identify my grandfather's uniform?
27
Identify the circa 1920 uniform in this photo