What were the population demographics in the South during the Hayes/Tilden election?

The most contentious election is US History was the 1876 election of the Republican Rutheford B. Hayes over his Democratic rival Samuel Tilden. Tilden won the reported popular vote but eventually Hayes triumphed in the Electoral College. There was reported to be much vote fraud on both sides. One of the most egregious voter suppression schemes in history was the disenfranchisement of the black vote in the South both by things like poll taxes and "reading" tests and by outright violence against polling places in black areas and against voters.

My question is, were there enough black voters in the South (i.e. men of appropriate age) to have given Hayes the popular vote if they had voted at a rate similar to white voters?

I've been looking at answering this for days, but in the end I think the question itself can't be properly answered for a couple of reasons.

The first is that we didn't have exit polling back then, so we don't really know what rate white people voted at, or even what rate black people voted at. Of course even then, some amount of Southern white voters were voting for Republicans, and some (tiny?) amount of black voters would vote for Democrats.

The second is that Reconstruction was still going on, so Jim Crow was not entirely set up yet. In fact, merely by looking at the county map, and comparing it to the Black Belt map, we can see which states were giving African Americans something like their full say, and which weren't. The difference between the Louisiana side of the Mississippi River and the Mississippi side is particularly stark. 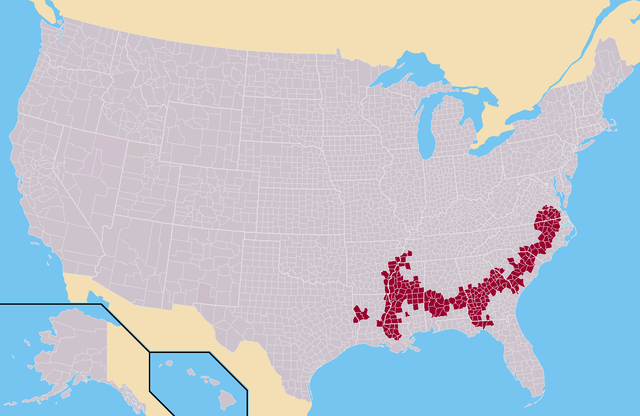 It seems pretty clear just from a glance at these maps that Mississippi and Georgia weren't letting their black citizens vote, Louisiana, Arkansas, and Florida mostly were. South Carolina, North Carolina, Virginia, and Alabama were in lots of places, but were suspiciously spotty.

In point of fact, at this time Louisiana, South Carolina, and Florida still had Federal troops in them protecting the rights of black citizens.

The third is that there was in fact shenanigans to an extent that it was simply not what any reasonable person could call a fair democratic election, so even if we did know those rates, simply applying them selectively wouldn't fix things. For instance, in South Carolina, birthplace of the Confederacy, 101% of voters voted in this election. That's a turnout record that hopefully will never be surpassed! You certainly can't fix the count there by speculatively adding voters to it.

Your question relates to the changing balance of power between Republicans and Democrats between the 1868 and 1876 Presidential elections, particularly in the southern United States. Your particular concern is the representation of African Americans in 1876, and whether possible suppression of their votes "unfairly" deprived Hayes of a popular vote majority to support his electoral college majority.

Most of the difference in the Democratic vote rise came in the southern states. The issue was that in 1868, many whites, were unable to vote, either because their individual states had not been reconstructed, or because the voters themselves had not taken the loyalty oaths or whatever was needed to establish themselves as voters. By 1876, whites had fully regained their suffrage.

In South Carolina, for example, the white population in 1870 was "only" 41%, but the Democrats won almost 50% of the vote in 1876 (versus 24% in 1872). This represented a huge surge and disproportion in the Democratic vote, reflecting, among other things, a 101% turnout of eligible voters, as pointed out by T.E.D. Such "ballot-stuffing" also suggests activity of the opposite kind, suppression of the "wrong" votes.

Not the answer you're looking for? Browse other questions tagged reconstruction or ask your own question.

1
In the governments of the Reconstruction South, were Blacks in government always under the control of Whites?
9
Why were blacks still victimized in the Northern states after slavery's abolition?
0
What was the most effective instrument used to disenfranchise the black population in Louisiana?
4
When were confederate veterans barred from office and voting after the civil war?