How realistic is the food consumption in Astrid Lindgrens 'Emil of Lönneberga' books?

The books take place on a small rural farm in Smaland in Sweden. I don't think it is spelled out exactly what time period it takes place but I would put it around 1830 to 1850. If someone has some clues from the book that pinpoint this more accurately that would also be interesting.

In general I feel the book is fairly historically accurate, although it shows less misery that there was. It is a childrens book after all. But there are a lot of scenes involving food and they seem to eat meat for almost every meal which looks unrealistic to me. What did the typical diet of a person living on a farm in Sweden at that time period look like? Was it really that meat heavy?

There are several aspects to observe:

We have a fictional account of which the author claimed to have based it on her own childhood and that of her father. It is thus already apparently an amalgamation of real memory and imagination of a golden old time in very backwaterish rural area as remembered and imagined by the author. The author was born in 1907, and her father in 1875.

Two further clues for the narrated timeframe are: sending troublemaker Emil over and them suffering "an earthquake" would mean being 'too much' for the Americans. Making the 1906 San Francisco earthquake a possible anchor? Another would be 'people being afraid of the comet' which would most likely correspond to Halley's comet in 1910.

Since 'emigration to America' is a topic featured in the stories,

Swedish emigration to the United States reached its height in the 1870–1900 era.
— WP

Astrid conjures up the image of Vimmerby at the beginning of the last century when she takes Michel and his family from Katthult to the market in Vimmerby. But Michel also has traits from Astrid's father Samuel August and her brother Gunnar.

"I thought it was funny to write about Michel, and do you know why? Well, because Michel was just a child in a world that resembled the world I lived in when I was little. And which was just like the world my dad lived in when he was little. A world that no longer exists. When I started writing about Michel and Ida and father Anton and mother Alma and Lina and Alfred and Croesa-Maja and the whole little Katthult, it was as if I came home. And I felt such a love for Michel, I felt that he was so closely related to my dad, who at some point towards the end of the 19th century was a little blond, barefoot boy in Sevedstorp in Småland, not far from Michel's Lönneberga.

My dad loved to tell stories. All his life he told. About everything, big and small, old and new, whatever came to his mind. He told about how he - just like Michel - made money as a gate boy at home in Sevedstorp, and how he - just like Michel - caught 60 crabs in a single dark night in August, and, just like Michel, he once managed to appease a crazy cow by taking her to some other cows that had more sense. What my daddy was telling me, about gate money and crayfish catches and crazy cows and ticklish horses and auctions and house surveys and poorhouses and markets and farmer's parties and whatever else I know, it all went into the books about Michel. It became like a frame for all his pranks. I was allowed to make up the pranks myself, at least most of them. For although my father was quite inventive as a small boy, he didn't do quite as much mischief as Michel. It's probably true that Michel did more mischief than any other boy in all of Småland and perhaps the whole world.
— "Die Geschichte hinter den Michel aus Lönneberga", Astrid Lindgren Company, astridlindgren.com (my translation from German, where Emil is named Michel), English version lacks author quote

This would make 1880–1920 the most likely historical timeframe to investigate.

Dietary patterns and their narrative significance

Dietary patterns of farmers are not that well documented, since they had direct access to their own livestock to be slaughtered and consumed, whereas urban people had to buy it and making the sheer price of meat a significant factor. Also note that actual national statistics of food consumption are only available after 1950.

Then we have on top of 'villagers eating comparatively more meat' in general the fact that meat was still held in high regard and an indispensable part of feasts. With large variations over the time of the year. When a beast is slaughtered, rather large quantities of meat products easily spoiled but difficult to preserve had to be consumed quite quickly. Blood being the first to be made into meals, choice cuts being the next, pieces to be dried, pickled, smoked or salted and a variety of sausages coming later. Things like ham and bacon needed time for curing, and the supply from one nose to tail slaughtering should last for a while.

Which means that even in a factual account there would be times of quite high meat consumption in rural areas for some parts of the year, while animal products may feature on an indeed more regular and altogether higher ratio than for poor factory workers in cities. Not to forget that large quantities of meat would be one necessary thing to describe when mentioning noteworthy meals on the one hand, and especially when describing 'good old times', an idyllic past that might as well be termed 'fat years'. Eating a lot of meat is used as a sign of well being and of being comparatively well off, even when otherwise 'poor'. That meat is present on almost every table doesn't say how much that actually is. A small sausage or a piece of bacon for flavour is not the same as three times daily a pound of flesh.

It is actually a plot point that Emil seems like he is almost always craving sausages. Hardly a sign of satiety from over-indulgence. He sneaks from his place of punishment the tool shed via a plank into the storage sausage shed on their farm for an extra portion and likewise into a little store in Grönshult for a nice hot dog. On Christmas there is even a scene of him freeing the poor people from the poor house, for a feasty scene, again centering seemingly around sausages. Emil's mother is also contemplating donating some meat products since 'even the poor should have them when it's Christmas'. On the other hand, him getting stuck in soup bowl to really get the last bit out of it is also a sign of 'constant appetite' and also of 'nothing is wasted', and 'no cornucopia either'.(src1, src2, src3 follwing picture are screenshots from the movie)

The actual meat consumption patterns for Sweden around the imagined time inquired would then look like this, with considerable variation at the beginning: 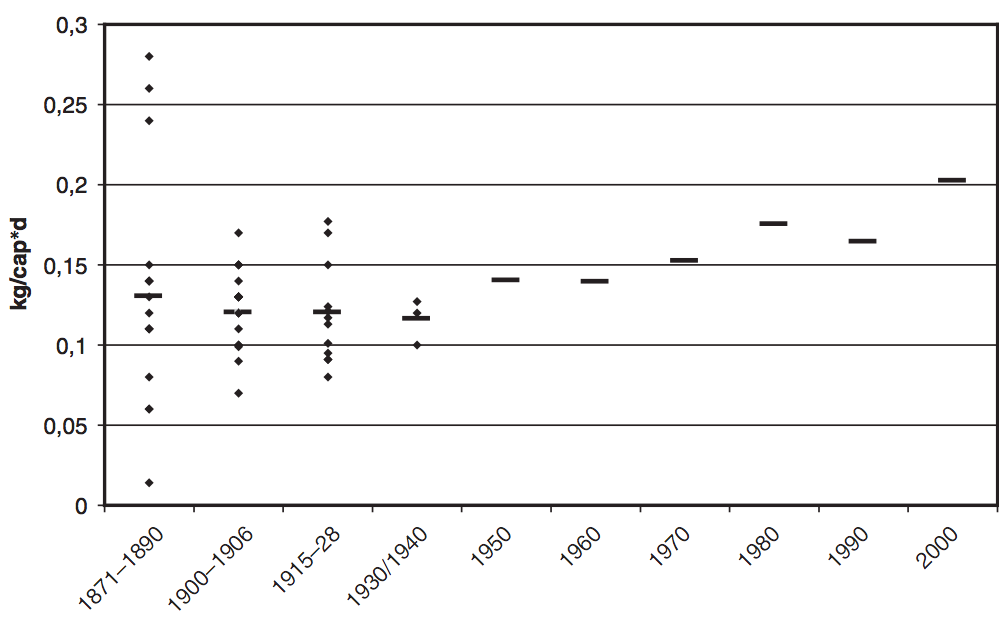 Daily consumption of meat in kg per capita. Data from the years 1871–1928 are based on hospital dietary regulations. Each dot represents a measured value. Information from the time period 1930/1940 is derived from reports on life circumstances by official statistics (Kungl. Socialstyrelsen, 1938, 1943) and Juréen (cited in Morell, 1989). Data from 1950–2000 are based on the national data on food consumption (Statens Jordbruksverket, 2000).
— Tina-Simone Schmid Neset: "Reconstructing SwedishFood Consumption from Hospital Diets After 1870", Ecology of Food and Nutrition, 43:3, p149-179, 2010 DOI

From this we see the meat consumption actually going down right after the imagined time frame. The pure availability of fruits was rare, especially for Northern Sweden, and vegetables and fruit would have been also very highly seasonal. The amount of milk and dairy consumed was and is quite high in Sweden.

From studies estimating the annual consumption per person varying from 16kg up to 56kg we also see estimates between:

Meat consumption rose, according to his results, from 29 kg around 1880 to about 40kg around 1900. This result concurs with Fahlbeck (1893) who calculated an annual per capita consumption of 28kg for the late 1880s based on the Agricultural Society’s records and foreign trade. Essemyr (1988) studied the consumption of sawmill workers in northern Sweden in the eighteenth and nineteenth centuries, using household budgets among other sources. For the different groups of workers the share of animal sources in the total intake of energy shifted from 13% to 29% and in the total intake of protein from 29% to 47% in 1870. Total consumption of meat products shifted from an annual consumption of 25kg to 42kg per consumption unit (before reduction, Essemyr, 1988, appendix p. 213). In her study on the Stocka Sawmill for the period 1870–1890, Fjellström (1990) stated that a large difference in consumption of meat products was evident. During this period the amount of pork that was bought annually by different families shifted from 9kg to 16kg per consumption unit. Fjellström (1990) asserts that for most families, household pigs supplied at least the same amount annually.

For the place of Småland and workers there it was apparently a less fat experience:

The annual consumption of meat in particular could differ substantially. In some hospitals, male personnel consumed more than 100kg/year in the 1890s, while the paupers at the poorhouse consumed 26kg/year in 1870 and the average patient less than 50kg. While the institutional diet did not differ much from the average that Juréen (cited in Morell, 1989) and Fahlbeck (1893) presented, workers around the country in 1889 still consumed only 23 and 29 kg/ capita per year in the counties of Småland and Östergötland respectively (Hirdman, 1983, p.286).

Within the stories, the frequent talk of meat products is neither corresponding to factual 'very eat heavy diet', nor representative for either small farmsteads in Sweden around 1900 nor is the book a detailed day-by-day account. It tells noteworthy stories and meat is a noteworthy component of for example lavish festive meals with guests. That would make the stories a sampling error for surveying dietary patterns. It is further more signifying the value assigned to meat than the actual volume of meat consumed in a fictional idyllic narration and an author's childhood memories.

Within the historic timeframe however, Swedish dietary patterns are somewhat difficult to ascertain. The available studies reach conclusions that vary wildly, with a general tendency towards higher meat consumption on farms with animals compared to poor workers or city dwellers, and a second trend towards ever growing meat consumption on average and in general, with perhaps a little slowed growth for the first half of the 20th century. Taken together, an impression of 'they generally really ate a lot of meat' is not warranted to conclude from the stories, but not an overly unlikely impossibility for the historic timeframe and one special farm either.

Not the answer you're looking for? Browse other questions tagged 19th-century sweden historical-accuracy or ask your own question.

14
Would the original readers of Lewis Carroll's books have made connections between the experiences in the books and drug use?
8
How do historians deal with inconsistencies?
6
How did the educational curriculum (books) flow from grade to grade in the 1800s?
1
How did the Swedes integrate Geats, Danes, Walloons, Finns & others?
3
How did Pontus de la Gardie drown?