Was Swastika a universally-recognized symbol of fascism as early as 1925?

In the Soviet sci-fi film "Napoleon Gas" of 1925, there is a secret society, called "Fascist Order Black Klan" in the United States. The order's uniform seems to be similar to that of the Ku Klux Klan except they wear clothing of black color instead of white, and with a huge swastika on it. The order's aim is to destroy the USSR, it has as its (secret) member the US war minister, who illegally produces chemical weapons in a plant, disguising it as an aniline paint and is a member of the "International Fascist League".

It seems from the film, the swastika symbol is closely associated with fascism, including the international one. Is this feature of the film anachronistic and a fantasy of the authors, or does it reflect the realities of 1925?

UPDATE This question is not about swastika being an anti-semitic symbol, but about its association with fascism specifically. As I know, fascist Italy did not use swastika as its symbol and Hitler's party was far from coming to power, so what made the authors use the swastika as an emblem of an American fascist society (that assembled an air unit to bomb Leningrad with illegally produced chemical weapons later in the film)?

However, the Soviet Union did often take notice of events in Europe (see e.g. stuff named after Rosa Luxemburg and Karl Liebknecht, two communist leaders murdered in 1919, by members of the same political movement that would bear swastikas on their helmets in 1920), so what was recognized in Germany may also have been recognized in the Soviet Union.

The German political intellectual Kurt Tucholsky wrote several poems with allusions to Swastikas in the early and mid-1920s (the German term is "Hakenkreuz"). So my understanding is that this was commonly recognized as a symbol of right-wing extremism within Germany by the mid-1920s if not slightly earlier.

This seems to stem from the Marinebrigade Ehrhardt, which was quite prominent in the destruction of the Munich Soviet Republic and during the Kapp-Putsch, and which extensively used swastika markings during the latter.

Given that the Soviet Union was fairly interested in what happened in Germany, it is possible that the film's inspiration for that symbolism is from there. On the other hand, as the answers to the question linked by Pieter Geerkens point out, there is also a connection between swastikas and White Russians during the Russian Civil War, which may be closer to home.

P.S. Another data point re. symbolism of the Hakenkreuz in Germany (and the knowledge thereof) may be obtained by searching through the Weltbühne editions archived at archive.org. Weltbühne was a leftist political magazine in the 1920s and 1930s. Editions before 1920 on archive.org are not easily searchable due to OCR problems, but the word appears only once in the first edition of 1920 (in reference to the Kapp-Putsch) and about five to 20 times in subsequent editions. So my guess is it got well-known in Germany during and after the Kapp-Putsch.

No, the Swastika was not generally (especially not world wide) taken as the symbol of Fascism in 1925. The Soviet film (Наполеон Газ 1925 / Napoleon Gas) does not use the Nazi-Swastika, it uses the Fylfot (left-facing) and Gammadion (right-facing) swastikas forms (see images below).

Adolf Hitler and his party were generally unknown at the time outside of Bavaria. When the party was founded in January 1920, the later Nazi-Swastika was allready in use by right-wing groups. Most notably by the Marine-Brigade Ehrhardt during the Kapp-Putsch of March 1920.
The party itself had just been refounded in February 1925 and the first band of Mein Kampf was published in July 1925 (the second in December 1926). 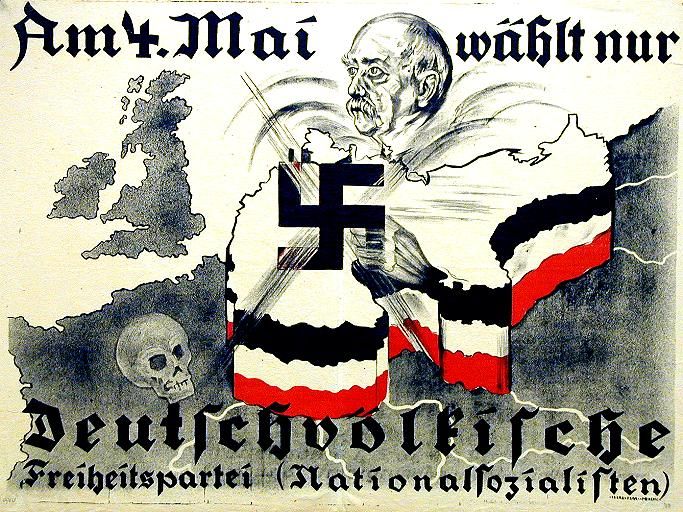 which had split from the main Nationalistic party Deutschnationale Volkspartei (DNVP) in 1922.

If any symbol generally represented Fascism at that time, then that of the National Fascist Party of Italy (Classical Fascism) that had been ruling since 1922.

A Bundle of sticks and Axe

The swastika's shown in the film (on the black garments) are of the Fylfot (left-facing) and Gammadion (right-facing) types, with the broken portions of its legs shortened and not the Nazi swastika used a 5 × 5 diagonal grid, but with the legs unshortened. 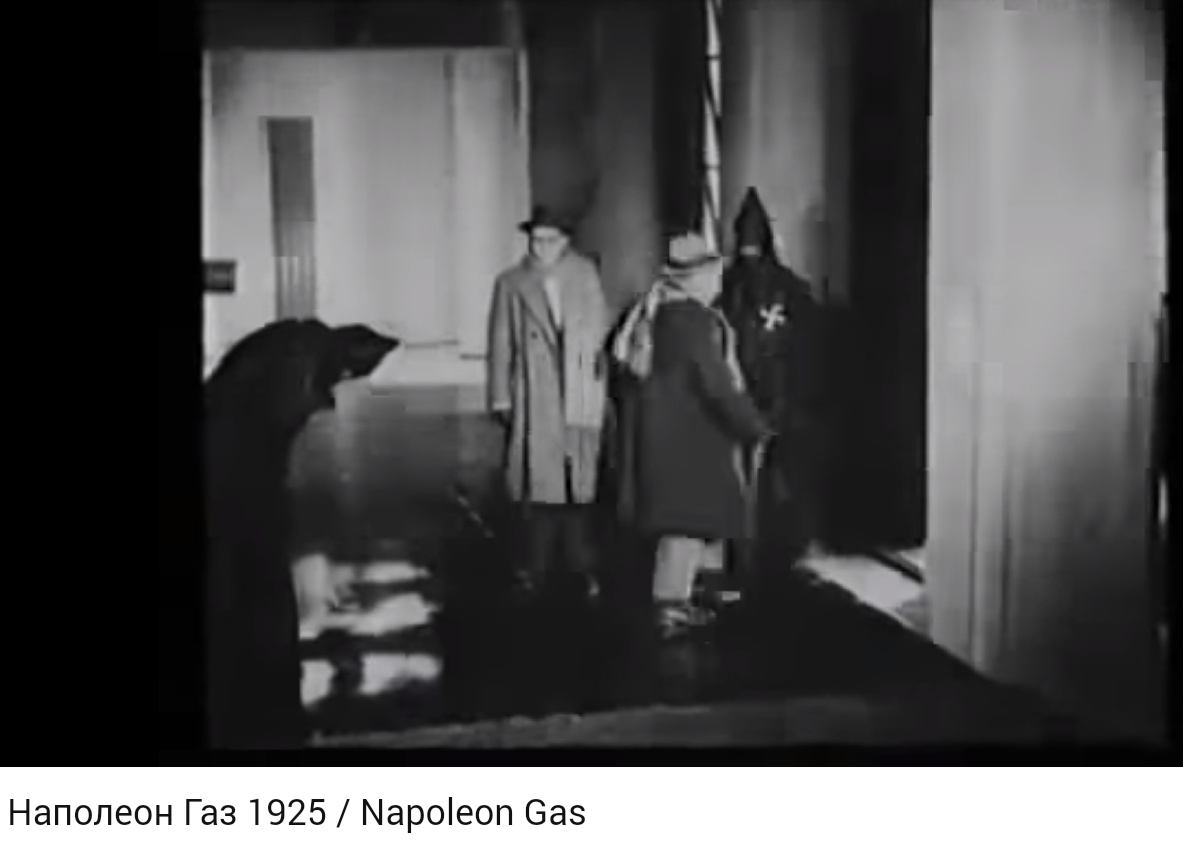 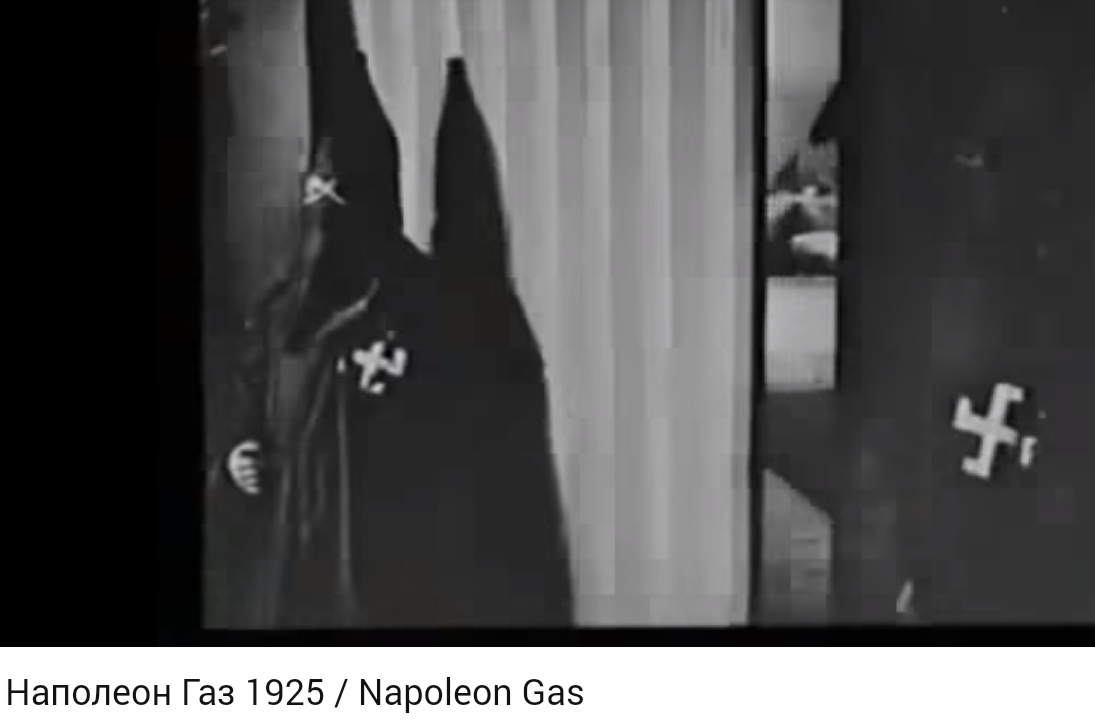 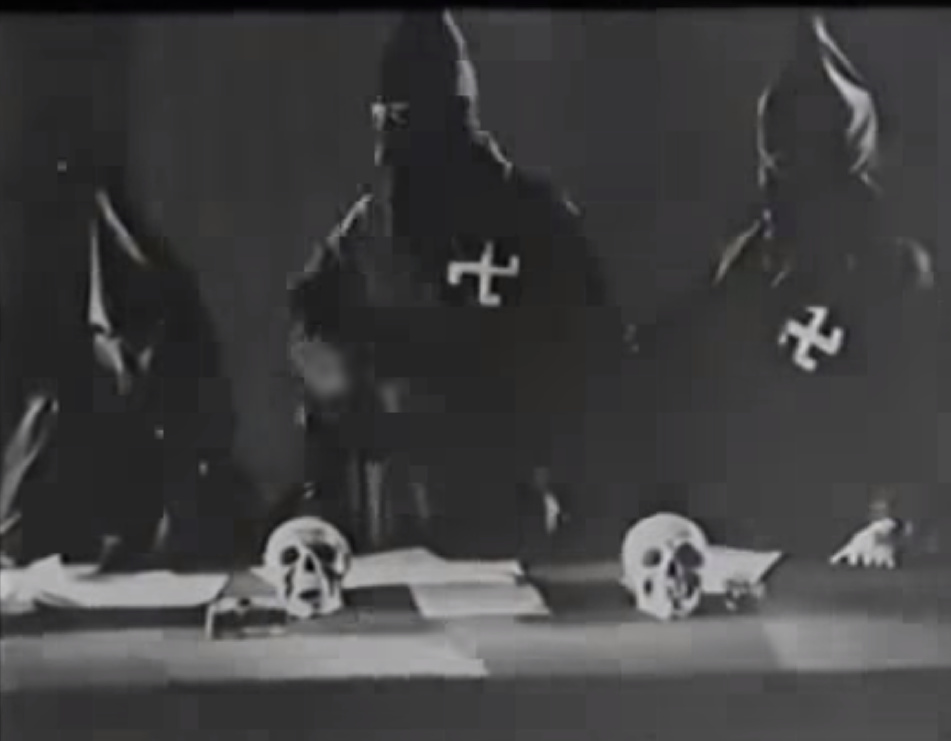 See also Symbols of state independence (German version only) and Western use of the swastika in the early 20th century , where the versions shown in the film were used in eastern Europe (Finnland, Poland, Russia) shortly after WWI to 1929.

Since the early Middle Ages the sign of the swastika was well established among all Slavic lands. Known as swarzyca, it was primarily associated with one of the Slavic gods named Svarog.

Note': Doubts have been expressed about the reliability of original source used by Wikipedia for this quote.

Western use of the swastika in the early 20th century
The Nazi Party adopted the symbol in the 1920s, and its use in Western countries faded after the Nazi association became dominant in the 1930s. In recent decades many public swastikas have been removed or covered over, although others have been deliberately retained as part of debate about historical preservation. 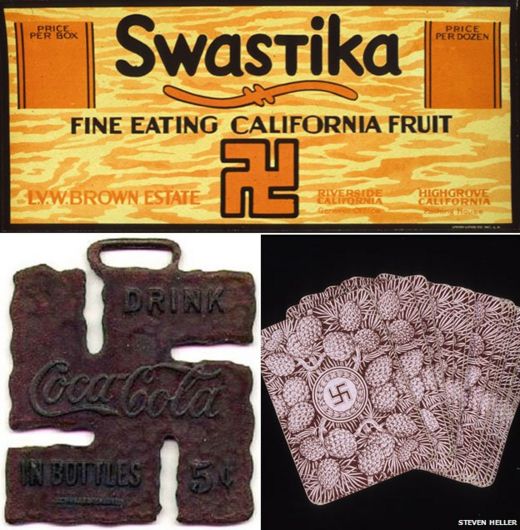 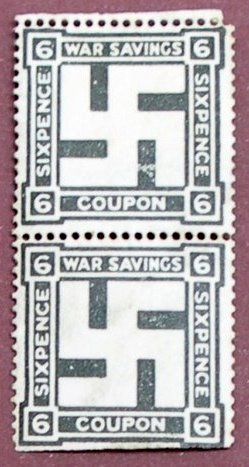 Not the answer you're looking for? Browse other questions tagged nazism fascism symbols or ask your own question.

18
Is the swastika in The Great Gatsby anti-semitic?

1
Was Fascism tied to any Specific Ideology Before Nazism and Italy's Fascist Party?