Why did Al Smith win six "Dixiecrat" states, and very little else?

Al Smith was the governor of New York who ran for President against Herbert Hoover in 1928. A factor in the race was that he was also the first Catholic to run on a major party ticket (John F. Kennedy was the second).

Smith won two New England states, Massachusetts and Rhode Island, where his Catholic background probably helped, rather than hurt him (and narrowly lost his home state of New York). Apart from that, he won six future "Dixiecrat" states: Arkansas, Louisiana, Mississippi, Alabama, Georgia, and South Carolina, most of which were won by Strom Thurmond in 1948 and George Wallace in 1968 as right-wing "independent" Democrats.

These "Dixiecrat" states were most influenced by the Ku Klux Klan, which were highly anti-Catholic. Yet Smith won these states, while most of the rest of the country voted against him, including southern states like Virginia, North Carolina and Florida. (Texas was close.)

This was the period of The Solid South, and considering that, Al Smith actually did remarkably badly there in the election of 1928.

Here's a map color-coded by how often "solid south" states voted for the Democratic nominee for President: 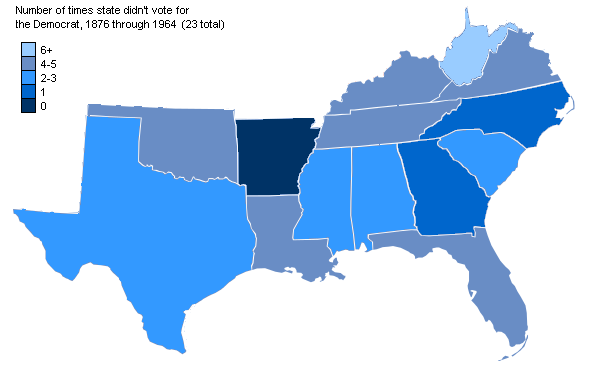 Now let's compare 1928 to the elections before and after it:

That was because of the nature of the Democratic party in the 100 years or so after the Civil War. During most of that time, the Republicans were the centrist, pro business party, while the Democrats were "everyone who was not a Republican." In 1928, this included an unlikely mixture of right and left; southern plantation owners, western agrarians, northern urban laborers, etc. Basically anyone who wasn't a northern capitalist.*

As late as the 1960s George Wallace (racist right) and George McGovern (radical left) were leaders in the same (Democratic) party. It is noteworthy that Smith "straddled" this party by winning the one state won by McGovern in 1972, Massachusetts (as well as neighboring Rhode Island), and the five states won by Wallace in 1968 (plus South Carolina which Strom Thurmond "flipped" to Nixon in 1968).

Hoover ran and won on a ticket of "peace and prosperity" (under his predecessor Coolidge). Most of the country bought this ticket. As strange as it may seem, the six southern states appeared not to buy into "Yankee" prosperity, even though they were the poorest part of the country. This occurred to the point where they were willing to vote for a Catholic rather than a Republican.

There used to be a term "yellow dog Democrat" referring to someone (usually southern) who would rather vote for a yellow dog running on the Democratic ticket than for any (human) Republican. That appears to be what happened in 1928. The fact that Smith had a running mate from Arkansas probably helped him to win the six southern states. Only Massachusetts and Rhode Island constituted his natural base.

*In 1932, the Democrats won the Presidency with a left-right ticket of Franklin D. Roosevelt of New York and John Nance Garner of Texas against the failed centrist, Herbert Hoover.

Not the answer you're looking for? Browse other questions tagged united-states election or ask your own question.

14
Why did the political parties in the US give up power to run primary elections to some states?
17
Why did Thomas Hendricks win the majority of Horace Greeley's electoral votes in 1872?
17
When and why did smiling at strangers and in photos become customary in the United States?
30
Why are the USA and Canada's states border so straight?
8
Free states and slave states - how did that work?
9
Why was Truman considered a heavy underdog in the 1948 election?
3
Why did Roosevelt and Truman change the usual switch date of presidency? (4th of March to 20th of January)
107
Why did the Confederacy think they could win the American Civil War?
5
Why did three states delay ratification of US fifth amendment?