Has the “lion dormant” ever been used in history?

I was looking at the different attitudes of heraldic lions and wondering if any historical families really used a lion dormant in their coats of arms. House Grandison is of course fine and dandy. But has the lion dormant really occurred in history? And for what reasons would a family choose a sleeping lion as opposed to the lion rampant? 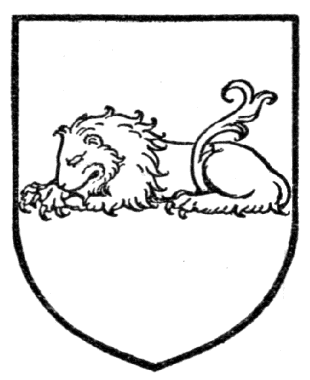 The lion dormant was not unused in heraldry, as a skim-thru of old books shows.

Page 150 of Alexander Brunet's 1839 The regal armorie of Great Britain, from the time of the ancient Britons to the reign of Her Majesty Queen Victoria; the institution of chivalry, and the origin of emblematic insignia in ancient nations, has this story, with footnote:

The Lion Dormant , 1193 . RICHARD I , in sailing for Syria , took the island of Cyprus , or Chypre ; but soon exchanged it for the nominal title of king of Jerusalem , a mere titular qualification , which belonged to Gui de Lusignan , a French lord . In abandoning thus a real property for a fictitious title , Richard hoisted the banner of the lion of the holy city . This was the sleeping or dormant lion of Judah — the badge of David and Solomon , kings of Jerusalem from the tribe of Judah . Thenceforth Richard assumed the surname of cæur de lion , either for his lion , or his great achievements against the infidels . The science of heraldry being yet very imperfect , the dormant lion of Jerusalem was indiscriminately represented couchant ( lying ) , passant ( walking ) , or rampant ( erect ) . The armorists , the engravers and painters of later centuries , being ignorant of the Norman leopards , represented Richard with three lions passant , which are evidently erroneous . *

Less fanciful is an entry on p.56 of Walter Rye's 1918 A list of coat armour used in Norfolk before the date of the first herald's visition of 1563, collected by Walter Rye:

On p.106 of George S. Master,s 1900 Collections for a parochial history of Wraxall this near miss:

And volume 3 of Thomas Robson's 1830 The British herald; or, Cabinet of armorial bearings of the nobility & gentry of Great Britain & Ireland, from the earliest to the present time; with a complete glossary of heraldic terms: to which is prefixed a History of heraldry, collected and arranged ... has a cryptic entry reading

Bernard Burke's 1884 The general armory of England, Scotland, Ireland, and Wales; comprising a registry of armorial bearings from the earliest to the present time, p1042 has an entry:

There are also many descriptions of a lion dormant being used on seals.

Not the answer you're looking for? Browse other questions tagged heraldry or ask your own question.

15
What is the origin of the rampant lion herald?
14
Lion in European monarchies' coats of arms
18
Why were balls used on the Medici coat of arms?
9
Is this costume plate from Theatrum Orbis Terrarum correctly colored?