Is this a pastiche of a particular painting or photograph?

The children's book Zen Ghosts by Jon J. Muth depicts a Halloween in suburban America, with several unexplained figures trick-or-treating in the background. Among them are these two children: 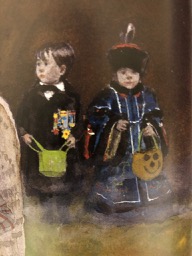 This image seems familiar to me. I thought at first that it might be a pastiche of either a depiction of Romanov children or one of Produkin-Gorsky's photographs. But a Google image search came up dry. I also checked for images of Leo Tolstoy's children, because Muth had previously adapted "The Three Questions" to a children's book, but I found only photos of them in their adulthood.

Is this based on a historic painting or photograph? Or is it just from Muth's imagination?