Why were Japanese escort ships not numerous at the battle of Bismarck Sea?

During the battle of Bismarck sea, Allied units performed air attacks that resulted in the nearly destruction of Japanese fleet. I understand the reasons why the Allies obtain such a success, namely:

However I do not understand why the Japanese let their forces go with only 8 destroyers (besides the 100 aircraft) as escorts? Condidering the path of the fleet, there was no heavy naval threats from the Allied fleets (the path was far north). But the Japanese knew they were to face air attacks, so why didn't they:

Bringing bigger ships in honestly would have been a pretty dumb thing for them to do, as earlier events in the war had already shown that heavy ships were sitting ducks against massed air power, and the allies (as amply demonstrated on the actual day) had a lot of land-based air assets in the area.

The Japanese plan appears to have been to try to sneak the troops into Lae by instead taking a logical route westward toward Madang (a much more logical sensible landing target), and then turning south and running to Lae at the last moment.

The problem is that they didn't know their codes had been broken, so the chances of pulling off any kind of organized deception were not great. The allies knew the convoy was coming, knew that turn was coming, and didn't waste any of their air assets searching off in the wrong direction, as the Japanese hoped they might.

But even in ideal circumstances, this plan relied on being able to lose the searching allied air screen when they made that "unexpected" turn South. For that to have much hope of working, they certainly couldn't commit a lot of conspicuous larger ships. Individual ships can be missed by a recon plane, but bigger ships are easier to spot, and every extra ship you add increases the odds of one of them getting spotted. 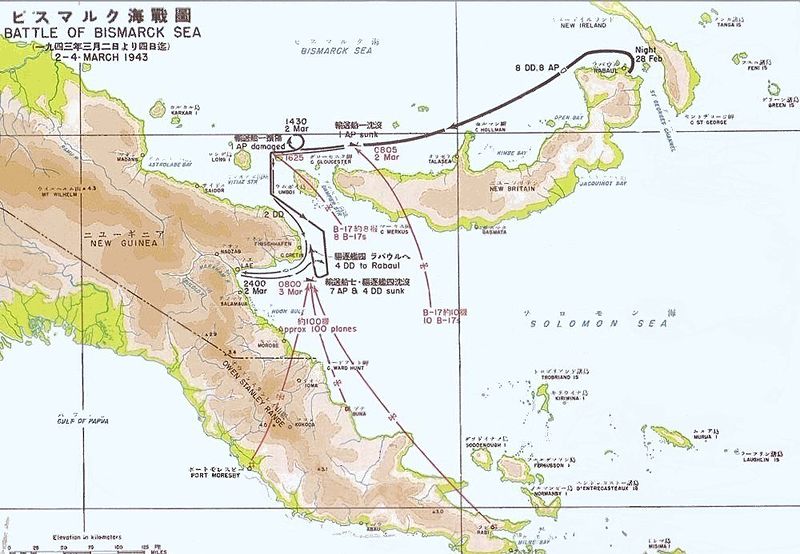 The tl;dr version is while a powerful surface force was present at Truk, the Japanese navy was spread very thin and very aware they could not replace their losses. They were fighting around New Guinea, the Solomon Islands, and the Aleutians as well as weathering the increasingly effective Allied submarine campaign. What was left of the offensive power of the IJN was not going to be thrown away escorting slow transports under heavy Allied air attack.

Let's look at what heavy units were available for the operation.

Note that most Japanese "battleships" were converted WWI battlecruisers. Despite upgrades they were sunk, in drydock, obsolete, or desperately being converted to hybrid carriers. The two Nagatos, true battleships but of 1920s vintage, were in Japan 4500km away. Yamato and Musashi were available at Truk, but they were not going to be risked for anything less than The Decisive Battle.

Rather than risking Zuiho and Zuikaku, their fighters were transferred to land bases near Rabaul to cover the operation.

Six heavy cruisers were available at Truk. The rest were refitting, sunk, or had other duties. These would remain with the Combined Fleet at Truk.

You're welcome to continue on with the light cruisers and destroyers, but I think you get the idea.

By this point in the war, it was recognized that surface vessels in daylight were sitting ducks against air power, and Japanese anti-aircraft was particularly poor. Sending more escorts would simply be sending more targets. Sending precious cruisers and battleships would be sending more valuable targets which the Japanese were incapable of replacing. And all of that would have to be sitting at Rabaul inside Allied bombing range.

In August 1942 at the Battle of Savo Island a Japanese fast cruiser force had rushed in at night and made mincemeat of the Allied warships. Instead of attacking the now vulnerable Allied transports, the real target of the raid, Vice-Admiral Mikawa decided to leg it before daylight brought Allied dive bombers.

All during the Guadalcanal campaign the Japanese had employed destroyers as fast transports which could get in, drop off men and supplies, and get out under cover of darkness: the Tokyo Express. When that got too dangerous they used submarines. Casualties were high.

The Japanese had success earlier in Operation Ke evacuating Guadalcanal with a heavy distant screening force of battleships and carriers plus a large force of land-based aircraft providing cover for an evacuation force of cruisers and destroyers. As before, their destroyers could be in and out quickly.

But the Bismark Sea fleet included proper transports each of which could carry far more than a destroyer, but the fleet would be limited to 7 knots. It would take days to get there and back. Once spotted their low speed would make it difficult to evade Allied airpower.

Fuel would be another consideration. By 1943 the IJN was feeling the pinch and every use of a heavy ship meant using precious fuel reserves. Fuel which had to be transported to a forward base like Rabaul 4500 km away from Japan.

Finally, Rabaul itself was under air attack. Any heavy units deployed there would be at risk.

The Japanese had moderate successes with small, fast convoys. In January a force of five destroyers and five transports made it from Rabaul to Lae suffering losses but mostly succeeding in their mission. Even so, this run was considered very risky. The Japanese would try to shore up their defenses up by moving more fighter aircraft into the area, and by having the fleet sail close to Japanese air bases, but it wasn't nearly enough.

After Bismarck Sea the Japanese gave up on trying to slip surface units through and instead switched to safer but much less capable submarine transports. They instead tried to go on the attack with an air offensive: Operation I-Go. Though they had some successes, the Allies could absorb the losses while the Japanese could not and it only served to further weaken Japanese air power.

20
Did the US and Soviet navies really come close to blows in the Indian Ocean in 1971?
5
What was the purpose of a division staff in a US Navy Task Force/Fleet in WWII?
3
Why didn't the Japanese disbelieve (1) an unencrypted emergency and (2) a report in a captured code?
23
How did the Allies achieve air superiority on Sicily?
12
Why didn't the Japanese develop air defenses after the bombing of Tokyo?
14
Why did the Germans build battle cruisers with a different profile than the British?
6
What were Helfrich's orders for Doorman in 1942 prior to the Battle of the Java Sea, and did he comment on these in later life?
42
In the Battle of the Coral Sea, how could two Japanese scouts grossly mis-identify two American ships?
1
What was the timetable for the arrival of the 100,000 man Japanese garrison at Rabaul?
7
How did East Indies oil lose its "top billing" in the Pacific War as the war went on?