In the 20th century many states restricted the capacity of their populations to emigrate. Most famously, Churchill described the variety of emigration, financial and political restrictions in Central Europe—imposed by the Soviet Union—as an "iron curtain" due to their cohesive and impervious nature. As a result, pervasive emigration restrictions are interesting—what's their history?

Have there been other examples in history (say, up to the 19th century) where countries did not allow their citizens to emigrate or travel abroad, save by very special permit?

The only example that comes to my mind is Frederick II prohibiting study in foreign universities, but I am thinking more of blanket prohibitions.

EDIT: The answers so far are very interesting but I am mainly interested here in external passports.

immigration travel emigration
Share
Improve this question
edited May 2 '13 at 15:06

Norway had emigration restrictions in the nineteenth century; they were lifted in 1860. From http://digitalarkivet.uib.no/utstilling/norge.htm (a page hosted by the Norwegian National Archives; the translation from Norwegian is mine:)

In some cases one wanted to keep persons from leaving the country, and the police had registries of these. The picture shows a page from one such protocol of those who were not allowed to leave the country. The reasons for one being listed here could be that one was waiting to serve a prison term, that one was owing money, or that the government feared that one would leave one's family forcing the goverment to take responsibility for it. Most of those denied emigration were young men. 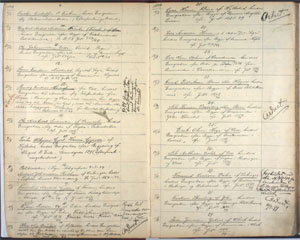 In 1860 the passport obligation for domestic travel, and for entering Norway, was lifted. Neither was a passport needed to leave the country. (link to some more info about this law.)

Until 1860 everyone travelling from one parish to another had to carry a travel certificate signed by the parish priest or local sheriff. Those leaving the country needed a passport that was obtained from the police, which also entered them into a protocol.

Summary: There was no "very special" permit, but one did need to obtain permission to leave Norway before 1860, and it could be denied even if you were not a criminal (ie for fear of you abandoning your family).

Sakoku was a set of Japanese policies that included the restriction that no Japanese could travel outside the country; these policies were effectively terminated in 1853.

Wikipedia has a number of examples of emigration restrictions including A 17th century Chinese restriction on emigration.

Some countries restrict the ability of women to travel abroad without a guardian, and I believe those restrictions extend into the period you describe. That may be within your scope, but it is unlikely to be easy to study.

First thing coming to mind: peasant's situation in Poland-Lithuania and Russian Tsardom. They could not leave their land without master's permission.

And even for no serfs in pre-1917 russia there was a tough [internal passport system] with few freedoms to travel or reside internally.

The Confederate States of America also had internal passports: example

Back to your question, you will be interested in this: http://en.wikipedia.org/wiki/Freedom_of_movement#Europe

I seem to recall emigration restrictions on Frenchmen being one of the reasons for the small population of French colonies in North America compared with the English colonies, but I'm afraid I can't place the origin of that.

Equally in the early days of a united Spain, Aragonese were forbidden to trade or settle in the American colonies, as these were Castilian claims whereas Aragon's sphere was seen as the Mediterranean.

You'll notice the common factor between these, however: they involve a state restricting emigration from the home country to places it controlled. Few pre-modern states would have had sufficient control over their borders to prevent individuals leaving their territory at all. Edited to add: And of course exile, whether self-imposed or otherwise, has often been a pressure-release valve, which it would rarely be in the interests of the state to stop up.

Not the answer you're looking for? Browse other questions tagged immigration travel emigration or ask your own question.