What kind of football was played in 645 Japan?

In the book History of Japan by Richard Mason, the author states in chapter 3:

In the year 645, opponents of the Soga leaders struck back. The final coup was preceded by careful preparations that included a famous meeting at a football game between the two leading Soga aristocrats, the head of the Nakatomi clam, named Kamatari (614-69), and a young imperial prince, Naka no ōe (626-71).

To what football is the author referring? It obviously can not be association football (soccer) or American football, as these were not introduced to Japan (or even invented) for more than a thousand years after the events described above.

It's referring to kemari, a variation of an ancient Chinese game of kicking a ball-like object around. Originally a military training exercise, it evolved into a sport played by teams of 12 - basically, proto-football - during the Han and Tang dynasties, before spreading to Japan around AD 600 along with the spread of Buddhism.

Note that the original source, from Nihon Shoki, actually records the meeting as:

Technically, 打毬 could have been dakyu, a polo-like game that also originated from China. However, the earliest other reference to this game dates to the 8th century, decades after Nihon Shoki was compiled in 681. It also makes little sense that the future emperor would lose his shoes playing proto-polo.

So most subsequent Japanese sources have assumed that the original record referred to kemari instead. For example, this pre-war painting depicting the meeting: 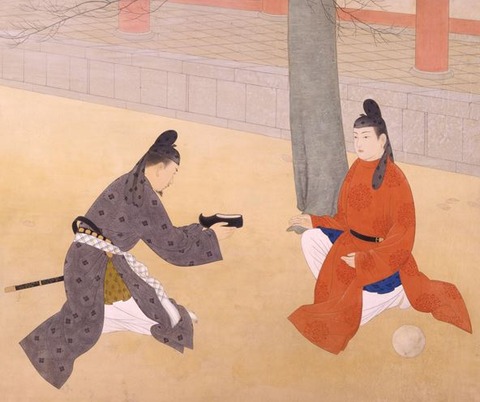 Not the answer you're looking for? Browse other questions tagged japan sports ancient-japan or ask your own question.

4
In Golf history, why is Musselburgh considered the first course, when St. Andrews was where golf was first played?
9
Was Japan really part of the Axis?
1
Are there any incidents of war / brutalities because of Football match other than the famous one between El Salvador and Honduras?
1
What was the postage from Japan to US in 1945?
9
What is the connection between the rise of modern football in the UK and the shortening of the work week?
5
What did Japanese architecture look like with heavy materials such as stone, mortar and clay?
1
What is the story of this kamon?