Do maps dating back to 1489/90 show Ascension and St Helena even though these islands were supposedly only discovered in 1501 and 1502 respectively?

The 1504 Vesconte Maggiolo Map appears to be the first map to name and accurately locate the islands of St Helena and Ascension as single isloated islands.

Ascension was shown in a similar location and named as such in the 1502 Cantino map, albeit as an archipelago. Cantino does not show St Helena.

Since the Portuguese chronicles state that Ascension was discovered by Joao da Nova in 1501 on his outward voyage to India and St Helena in 1502 on his return to Lisbon, I am curious about some earlier maps.

For example, there is the 1500 Juan la Cosa map. I have highlighted two archipelagos. These are extremely reminiscent of Ascension and St Helena but this map predates the year these islands were discovered. There are two discrepancies. First they are shown as island clusters. Second they seem to be several hundred km too far to the east. 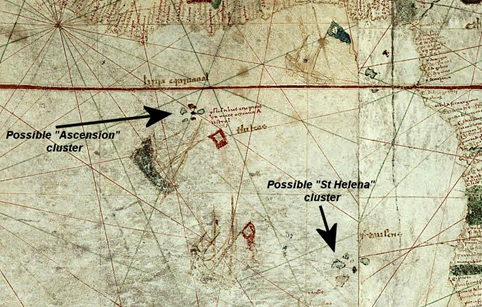 Going further back in time, there is the “Columbus” Portolan sea chart which has been dated to the early 1490s. Once again, there seems to be an "Ascension Island" archipelago, albeit the St Helena island cluster is no longer shown.

There is a still earlier map, the 1489-90 Henricus Martellus map, that shows what appears to be an enormous archipelago that I have highlighted in the white square. If not Ascension, what is this meant to represent? Incidentally, maybe the legend next to the Ascension island cluster provides a clue but I cannot establish what it says.

It is clear to me that neither the "Ascension" nor the "St Helena" archipelagos are meant to represent the major Gulf of Guinea islands - São Tomé, Principe and Annobón – which are separately shown and reasonably accurately located on these early maps.

So, if not St Helena and Ascension, what are these island clusters meant to represent?

Partial answer, focus on Martellus map and its meaining:

First, the legend seemingly attached to the islands in the Martellus map is not for them but for the continent:

The world map is of particular interest partly because it (like the rest of the manuscript) is in very good condition, and it contains three legends relating to Portuguese exploration of Africa that demonstrate Martellus’s interest in using the most recent and accurate sources available to him.
The first reads:

hec est uera forma moderna affrice secundum descr[i]ptionem Portugalensium Inter mare Mediterraneaum et oceanum meridionalem.
This is the modern true shape of Africa according to the map of the Portuguese, from the Mediterranean Sea to the southern ocean.

Which is unfortunate. As the islands at that time were problematic for cartographers to depict:

There is a banner just off the western coast of North Africa and just north of the equator on Martellus’s map which unfortunately is illegible in natural, ultraviolet, infrared, and multispectral images of the map (tile C02R02). There is a legend in essentially the same spot on Waldseemüller’s map, just a bit further off the coast, and it is tempting to think that Waldseemüller borrowed from Martellus here, particularly as there are no other texts off the west coast of Africa on either map (aside from toponyms), which makes the coincidence of position striking. Waldseemüller’s legend, which refers to the Cape Verde islands, reads

Insule Portugalensium inuente tempore herici [sic] infantis Anno 1472, “Islands of the Portuguese discovered in the time of the Infante Henry, in the year 1472.”

There is a problem with the date here: not only were the islands actually discovered c. 1456, but in addition, Henry the Navigator died November 13, 1460, so the islands cannot have been discovered in 1472 and during Henry’s time.
— Chet Van Duzer: "Henricus Martellus’s World Map at Yale (c. 1491) Multispectral Imaging, Sources, and Influence", Springer: Cham, 2019. DOI

Getting perhaps a little closer to the description of the islands in question specifically, you may want to read the difficult to get access to (I don't have it):

Not an answer, just a reference which may open other questions, but too long for comment.

I have a book on old maps, and was intrigued about Columbus map, which as you say in the question, shows islands close to the real position of Ascension Island. Then, I zoomed in to get enough words from the latin inscription to google them. And this reference appeared:

It has a section "Le sete poncele in the South Atlantic". In short, this reference gives you 2 possible solutions:

some medieval maps plotted arbitrary atlantic islands as reported in the legend of St Brendan (looks crazy, but recently somebody recreated one of his legendary voyages in a historically recreated ship... ). Other legends such as the St Ursula's 11K virgins which sailed to the Atlantic were conflated with Brendan legend. The text around our "Ascension islands" in Columbus map says "Islands of the Maidens" and might refer to those legends.

First possibility: In late XV c., it was clear that St. Brendan islands did not exist anywhere close to the europe, but some mapmakers may have just shifted them to the west or south - thus their position might be completely arbitrary and do not show any discovery of real islands.

A possibly contemporary inscription on the margins (not visible in the image linked) in Waldseemüller’s 1507 map also conflates the "insule delle 7 pulzelle", also reasonably close to real Ascension Island, with so called Martin Islands. These are in Southern Hemisphere as "it is summer there when here is winter", and it fits with text in Martin Behaim’s 1492 globe. The article cites Behaim's claim that he went there with the Portuguese in 1484 and named the islands after himself, but warns the reader that in the XVII c. there were attempts to exaggerate Behaim's claims.

Second possibility is too look for info about Behaim's claim, or about the 1484 Portuguese voyages.

Not the answer you're looking for? Browse other questions tagged maps age-of-discovery cartography portuguese-empire or ask your own question.

6
Why did it take so long for humanity to be able to cross the oceans?