What were the relations between Romania and Bulgaria before WWI?

I am researching the Balkan's involvement in World War 1. Specifically, Bulgaria, Serbia, and Romania.

What were Romanian - and Bulgarian relations in, and around the lead-up to the First World War, and the War itself. And, what were the relations of the Great European Powers, and the Balkans within 1900 - 1920 (why did they consider the Balkans valuable, and what did they do about it).

If the question was to be reformulated as "What were relations between Romania and Bulgaria before the Second Balkan War?", the relation between the two countries could be qualified as amicable, given that for some time before and after 1878 even the unification of the two states was seen as a possibility.

Regarding a possible Panslavic menace, I have to disagree with @TomAu here: that was not a dominant issue in Romanian internal debates or nationalistic discourse before WW1. Russia helped Romania in gaining its independence in 1877-78, a war in which panslavic propaganda was mainly anti-Ottoman; another issue on which Romania and Bulgaria found themselves on the same front was that of an eventual Russian expansion towards the Bosporus. These two factors — Russian help against the Turks and Russian imperialist menace — were comparatively the same for the two countries. On the other hand, Bulgarian politicians were split between Russophile and Russophobes, the latter promoting strong rapprochement (even union) with Romania during the last decades of the 19th century.

For clear animosity between Romania and Bulgaria one has to look at the Second Balkan War. Romanian intervention in Bulgaria was very short and there were no direct casualties. Romanians lost thousands of soldiers only due to a cholera outbreak on the front. Those losses triggered a political campaign against the supporters of that intervention, who had little choice but to promote the modest territorial gains (south of Dobrudja) at Bulgaria's expense.

Romania's intervention against Bulgaria in the Second Balkan War was not based on previous grudge against Bulgaria but on more general reasons, like the temptation of playing the arbiter in a dispute where otherwise it had no major stakes involved and where it risked very little, while improving relations with all the rest of the involved parties (given Bulgaria was fighting alone) and increasing its prestige with the rest of Europe (including Russia, which subsequently was called to mediate; the fact that it was Romania who issued that call contradicts the idea that Bulgaria was naturally closer to Russia than Romania was). European powers were annoyed and tired by the Balkan conflicts, and Romania was trying to get on top and also to prove it was above "all that mess", and to intervene as if from the exterior, as a problem solver and a pacifying force.

All the countries involved in the Balkan wars had re-appeared on the map only in the 19th century. Therefore it was only normal for these new states to have a lot of unresolved disputes between themselves and with the larger powers (Austria-Hungary and Turkey).

This is particularly striking in the case of Bulgaria, which was characterized by a very abrupt territorial evolution after its autonomy in 1878. 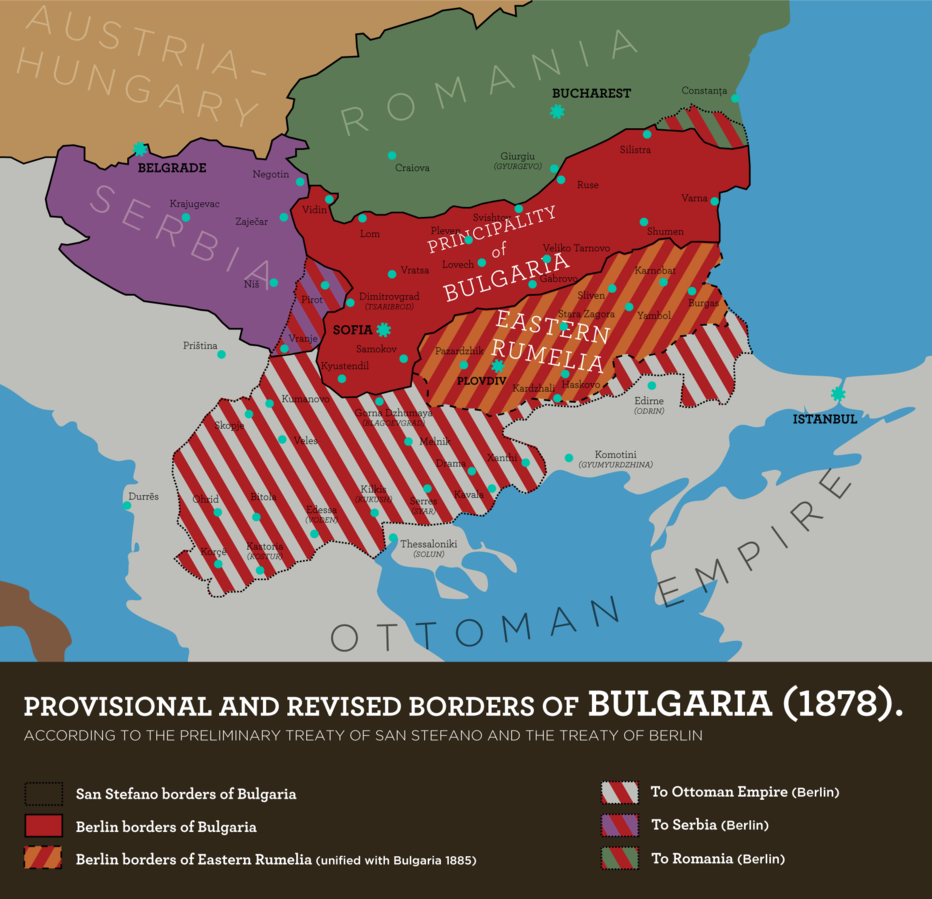 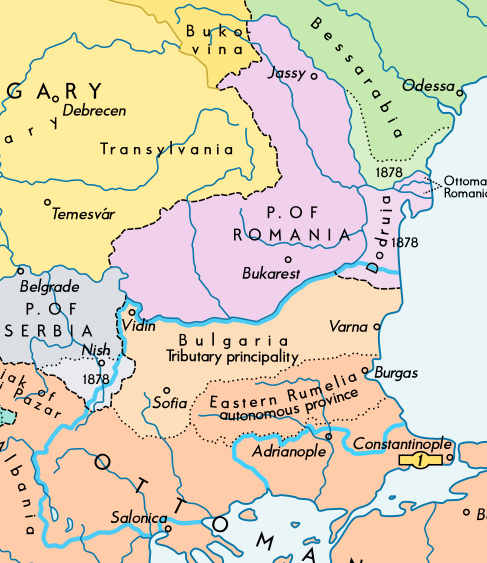 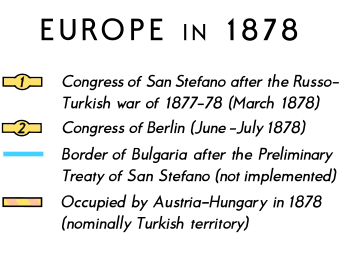 When, after the 1877-78 war the Bulgarian state appeared on the map, Romania received most of the Dobrudja (basically as a compensation for the south of Bassarabia taken by Russia: see map above), but that territory didn't had significant Bulgarian population, especially compared to the other territories disputed between Bulgaria and its neighbors.

Here is a 1861 ethnographic map of the region: 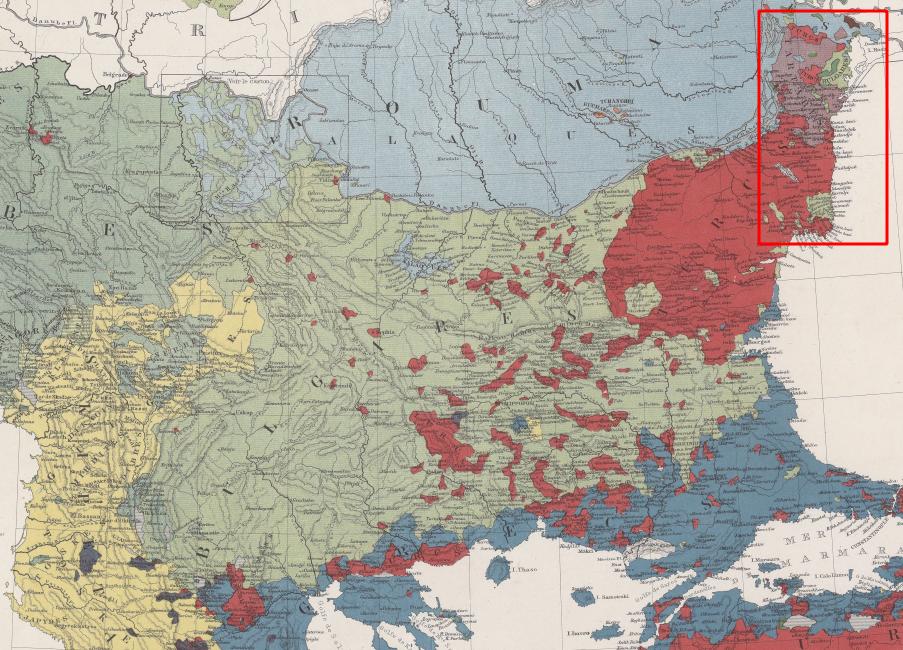 and a closer look at Dobrudja: 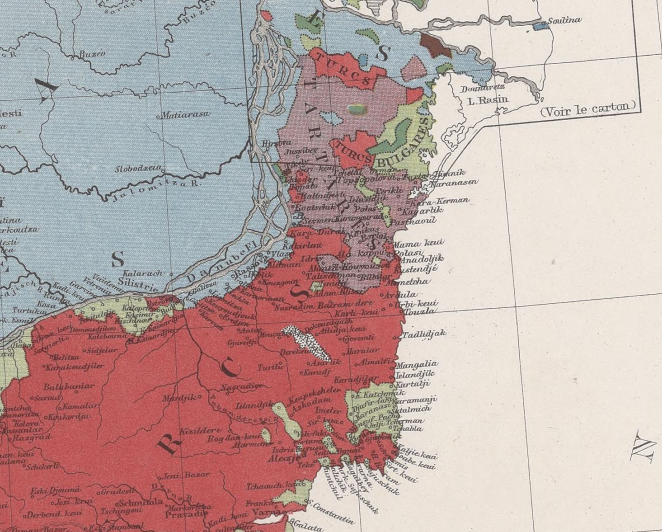 The more independent Balkan states on the map, the more potential conflicts: the Balkan Wars were their direct effect. The WW1 offered the conditions for restarting those disputes which otherwise might have settled after the second Balkan war. But Romania was largely exterior to those disputes and was focused much more on the relations with Russia which was occupying Bassarabia (eastern part of Moldavia) — hence its secret defensive alliance with Austria-Hungary, which was instead occupying Tranylvania (where Romanians were the majority, albeit before 1918 not the absolute majority) — hence Romania's alliance with the Entente in 1916.

There was no real territorial dispute between the two states before the second Balkan War, when Bulgaria found itself at war with all its First Balkan War allies and enemies. After that, relations with Romania soured of course, in a context where, as Wikipedia puts it:

After its defeat, Bulgaria turned into a revanchist local power looking for a second opportunity to fulfill its national aspirations. ... To this end, it participated in the First World War on the side of the Central Powers, since its Balkan enemies (Serbia, Montenegro, Greece, and Romania) were pro-Entente...

That description is too simplistic: Bulgaria's territorial demands against Romania were less significant (and also less motivated ethnically) compared to those against its other neighbors. Also, Bulgaria and Romania both hesitated a lot between the two WW1 camps before choosing. Their opposite choice had practically nothing to do with their mutual relations. (Bulgaria was fatally inclined to join Austria-Hungary against Serbia, but its WW1 action against Romania was a consequence rather than a goal of its WW1 alliance with the Central Powers. Romania wanted Transylvania from Austria-Hungary but also Bassarabia from Russia, and was lucky enough to get them both in the end after an initial military failure at least as severe as the one that befell Bulgaria, who initially was more successful.)

Prior to World War I, Romania, which had gained independence from the Ottoman Empire in 1877, feared Russian aggression, and the Pan Slav movement. As such, it aligned with, but did not formally join the Triple Alliance of Germany, Austria-Hungary, and Italy (it also feared Austria-Hungary).

The natural result was that it also feared Slavic neighbors such as Bulgaria and Serbia. In 1913, during the Second Balkan War, it saw and took, a chance to grab a slice of Bulgaria, southern Dobruja, while Bulgaria as "otherwise engaged."

During World War I, Romania and Bulgaria were on opposite sides for reasons other than their feelings for each other. Bulgaria was jealous of Serbia (and started the Second Balkan War because of that). So it jumped at the chance to ally with the Central Powers, crush Serbia, and become (temporarily) "top dog" among the South Slavs. On the other hand, Romania was more concerned about taking Transylvania away from Hungary than with Dobruja or anything related to Bulgaria, which is why she joined the Allies, making her an "enemy" of Bulgaria.

Not the answer you're looking for? Browse other questions tagged world-war-one russia the-balkans bulgaria or ask your own question.

10
What do "zones of influence" mean, according to the Treaty of Sevres after WWI?
8
What specific changes were made to political ideologies around during and before World War I?
18
How were the Bulgarians regarded by the Nazis during World War II?
10
How was the relation between the Ottoman Empire and Serbia, Greece, and Montenegro during the Second Balkan War?
5
Written sources that mention Macedonia, prior to the 19th century?
11
Did Tito back the Bulgarian anti Communist Goryani resistance movement?
8
Why were there "Tributary States" to the Ottoman Empire?
1
In World War 1, why were the Australian and Canadian troops so good?
14
Is there convincing evidence that the language of Bulgars (proto-Bulgarians) was not Turkic, but Indo-European?
0
How would an Allied promise to "supply" Romania sway that country?