I watched somebody play a video game recently (Maid of Sker) which is a period horror set in the late 1800s, and in it there is an object that caught my attention. 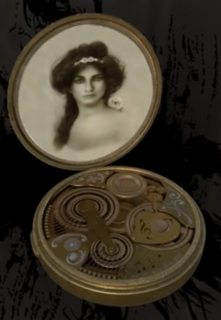 They call it a "music pendant" and it looks almost like the movement of a pocket watch. I've looked up "music pendant" online but can only find things that look like this: 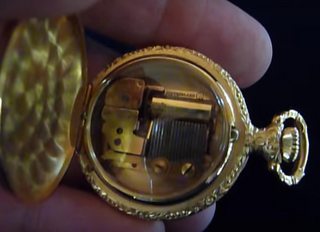 Did these objects really exist, or is it a work of fiction?

Yes, this is one of the incarnations of the 'music box' or 'musical box', and the Wikipedia article has some information about them:

The original snuff boxes were tiny containers which could fit into a gentleman's waistcoat pocket. The music boxes could have any size from that of a hat box to a large piece of furniture, but most were tabletop specimens. They were usually powered by clockwork and originally produced by artisan watchmakers. For most of the 19th century, the bulk of music box production was concentrated in Switzerland, building upon a strong watchmaking tradition. The first music box factory was opened there in 1815 by Jérémie Recordon and Samuel Junod. There were also a few manufacturers in Bohemia and Germany. By the end of the 19th century, some of the European makers had opened factories in the United States.

Further down is a timeline which explicitly mentions music boxes of this size years before your movie is set:

1811: The first music boxes are produced in Sainte-Croix; an industry which surpasses the watchmaking and lace industries, and rapidly brings renown to the town. At this time, the musical-box industry represents 10% of Switzerland's export.

1865: Charles Reuge, a watchmaker from the Val-de-Travers, settles in Sainte-Croix. He is one of many artisans making pocket watches with musical movements of the traditional calibre.

No, that is not a real music box. The tines for the left side wheel are too close together and don't cover the full width of the wheel, which would make some the pins sound two notes rather than one, and the lower wheel has tines activated both forwards and backwards, which would jam - the pins have to push the tines up and away. Here's a real one you can see the pins clearly, and the spacing, and everything will work smoothly with the disc rotating counter clockwise pushing the tines out the way rather than bending them into the disc.

(You did mean to write pedant in the title, right?)

13
What is Poosball, an early 1900s women's team sport?
29
What is this household object from early 1900s rural Russia?
21
In the early 1900s, how did US politicians treat black dignitaries from other countries?
3
What music did a Napoleonic era campaigning soldier hear?
1
How long would it have taken to get to the Poconos in the early 1900s?
6
Handheld music player in the 1890s?
2
Has any music act ever topped the Beatles in sales?
1
What did Cosima Wagner mean by coating music?
2
Did people in the late 1800s and earlier really think that there would be, or already exist, "mechanical men"?