What is this military uniform from the 1870s? 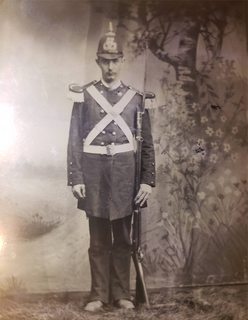 This is a Tintype photo from around 1860 to 1870 time period. I don't know what country this comes from. The photo was discovered in the United States with a group of pictures tracing a German Surname. The person in the photo is wearing a pickelhaube (spiked helmet) and is holding a rifle with a bayonet.

I would like to figure out what type of uniform this is and the emblem on the helmet. Any help identifying this would be greatly appreciated. 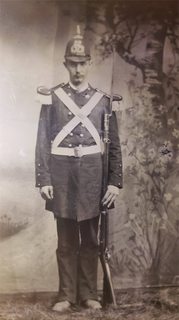 Visually it is extremely difficult to really get details that would make this 'easy' to identify. So lets try a crowd intelligence approach via a community wiki?

The following is a best effort to describe what is identifiable.

This is currently quite incomplete. There is a lot of guess work involved and the current results are a bit contradictory. But since OP says that the image in question is all we going to get, this seems to be the best approach?

Please edit in any details you might discern from the limited info we get from the pictures:

This looks a bit sloppy: the fit seems to be not ideal, the soldier too small for the uniform. The belt isn't straight, the buckle rotated 5 degrees to the left, and the bands crossing the breast not centred. The belt hides to one half behind a right button of the tunic but obscures the corresponding button on the left. The two visible collars are also disorderly out of line.

A certain feeling bout this suggests the person may have been a bit drunk at the time. Maybe it's an actor in a costume.

The helmet shape does not look Prussian/German. Spiked helmets called Pickelhaube were introduced in in Prussia 1842/43 and were even steeper initially, but then with lots of changes over the years made ever flatter.

Other nations like Great Britain, Russia, USA, Chile, Sweden/Norway have also used them, however shortly in some cases. USA seems to have had them the briefest, Sweden, Chile, UK still use them in ceremonial roles. 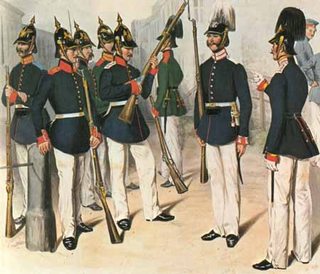 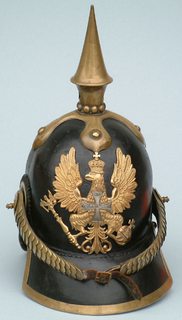 Evolution of helmet shape in Prussia: 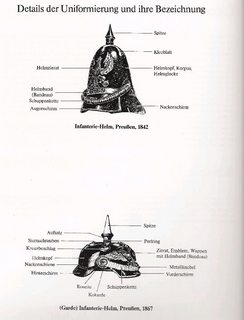 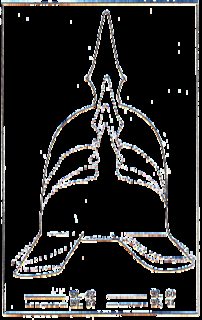 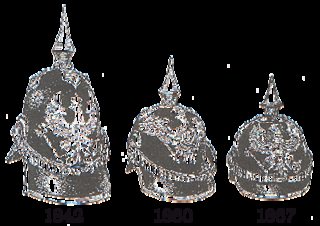 Small and obscure Landwehr units having different versions/shapes are not excluded by this. (example for Bavarian Landwehr)

But overall the helmet shape looks like those used in Great Britain (similar to custodian helmet). This is reinforced by the spike itself: Prussianhelmets would have more massive one and the earlier versions would be mounted on a much more visible metal cross about the cranial center.

Despite the enormous variation of those: Unlike any Prussian emblem I've ever encountered. Those Prussian versions (as well as most others that are connected or even subserviant to the Prussian army, like Reuss, Oldenburg, show a big eagle with spread wings, Saxony a star pattern, Bavaria, Baden and Württemberg a much more complicated 'logo'.

Of all German states, the closest match would be a quite imperfect one from Hessia. 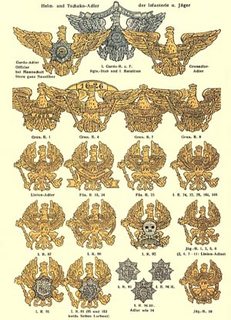 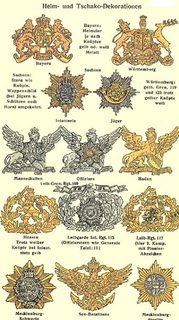 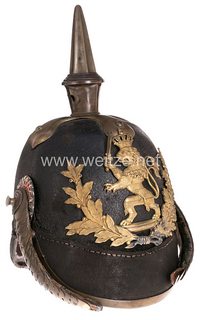 On closer inspection it looks like a wreath with a non-symmetric triangular symbol in the center and either two other smybols on top or a single symbol with a visual fluke of darkness in the middle creating the illusion of separation.
If it is indeed just one single symbol on top, then it might be a crown.
If it is a crown of that size and visual dominance, and this almost triangular shape that may be a harp then the closest match seems to be: Royal Irish constabulary? 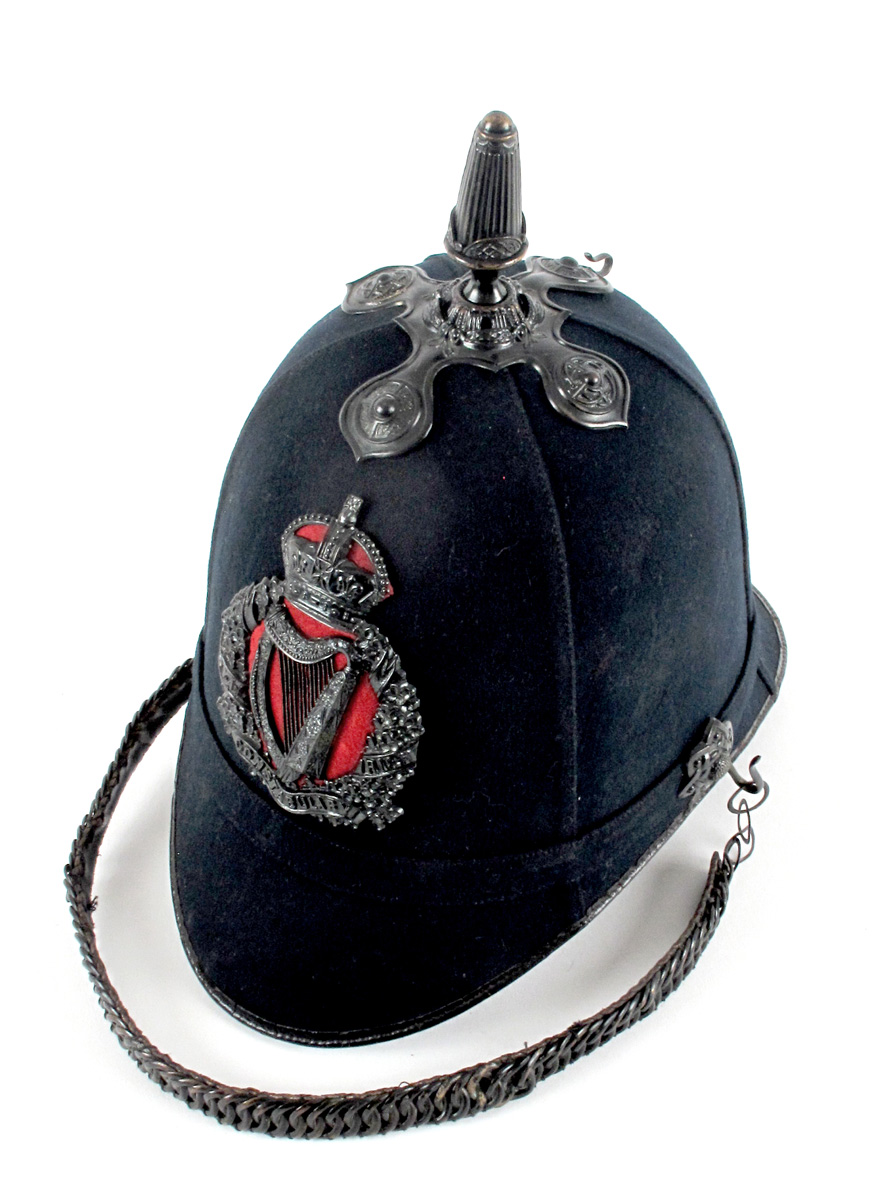 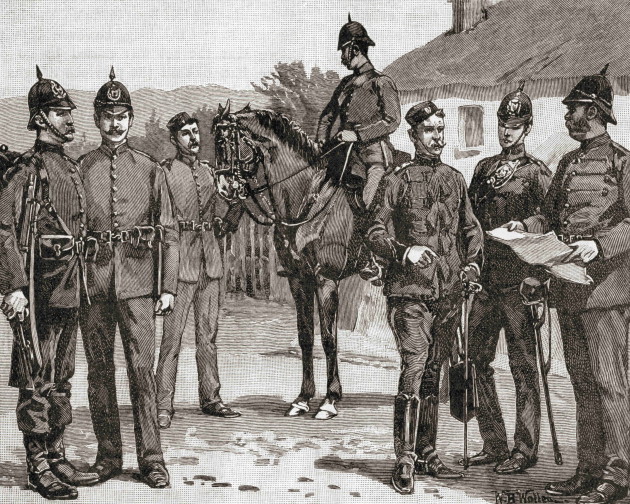 (src: Explainer: Who were the RIC?)

Seems to be of white colour.

Rectangular box shaped. Sign looks like an 'R'. (Most German version would have a round emblem on them]

These kind of epaulettes are not that common in Prussian/German uniforms, and usually reseved for officers.

Double breasted button-front that opens to the left!

This seems like either unheard of for Prussian uniforms, but the image could have been flipped?

Looks like a variation of 'Brandenburg' three button cuff, but buttons are small and quite widely spaced and it's over all quite sparsely decorated.

At first glance it resembles a bit the 'Dreyse needle' with Dillenbajonett M/62 (Seems to be at least a specialised bayonet (to me: ~'Russian type', not a 'convertable knife' like Hirschfänger, Seitengewehr etc)? 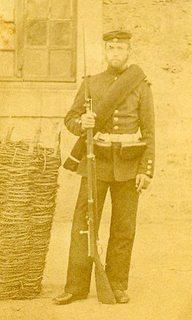 The bayonet could be right. It's definitely a spike. The curve and band match. As for a Dreyse, that was my first guess, but it would have to be a variant. There might be that cheek in the stock for the magazine, it's hard to tell. The front band is too far forward. The sling is attached too far forward. The rear sight appears incorrect.

Pikelhaube type helmets were vary popular in various armies in the late 19th century, including the US army.

Furthermore, some countries had more than one army. The 19th century USA, for example, had the militia systems in every state and territory, as well as both the United States Army and the United States Volunteers during wars.

Germany had about 30 different kingdoms, grand duchies, duchies, principalities, and city states during this era, and even after the formation of the German Empire in 1871 their militaries retained their separate uniforms.

So a better image of the photo and closeups of insignia would be very useful.