Why was Jesus depicted so differently in medieval Madonnas?

We can expect a portrait of Jesus, from either the Roman or the medieval eras, to look something approximating this: 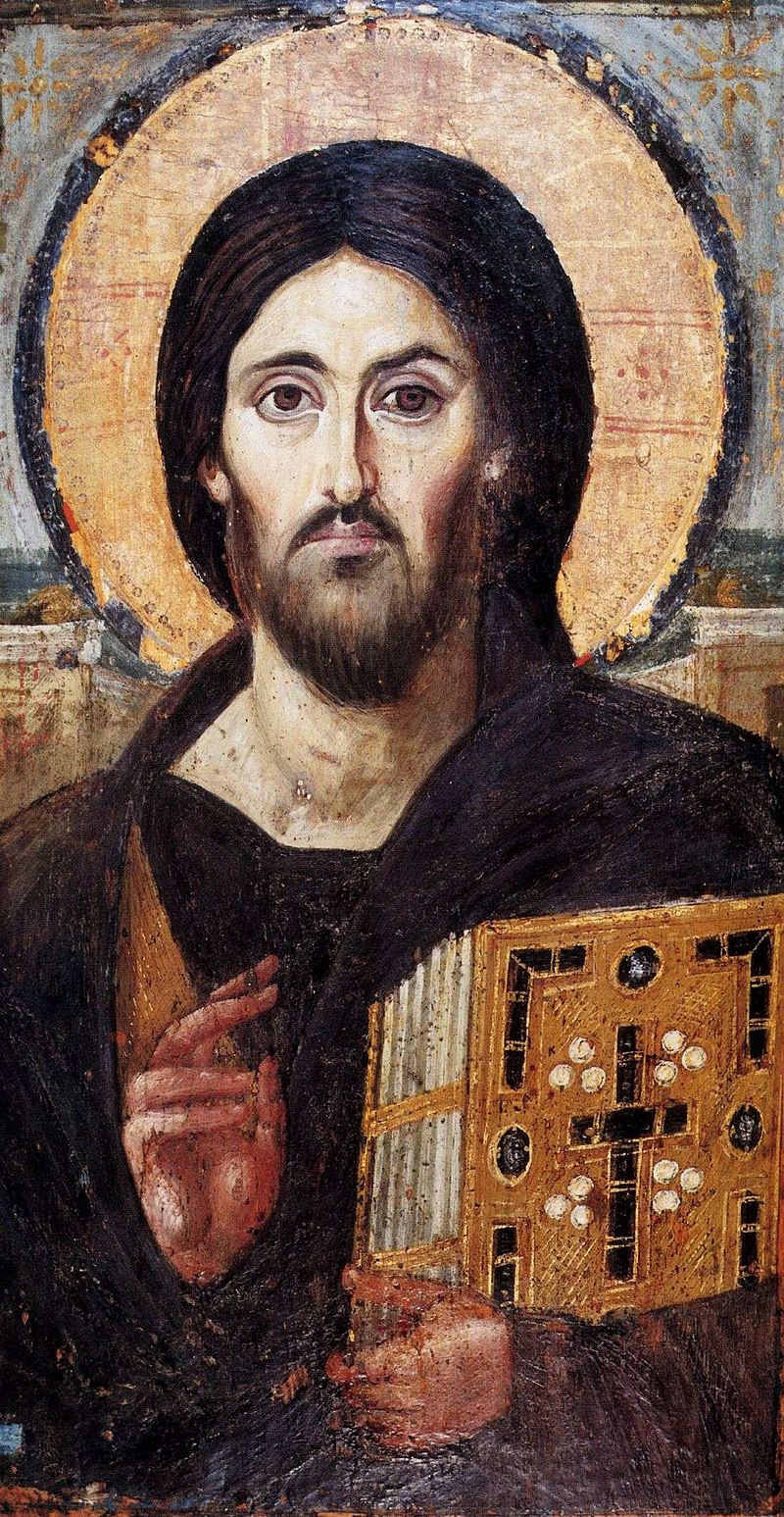 However, in medieval Madonnas that focused on a more abstract form of depiction, baby Jesus (his head is intentionally depicted as that of an adult male, i.e. Jesus is depicted as a homunculus) looked like this: 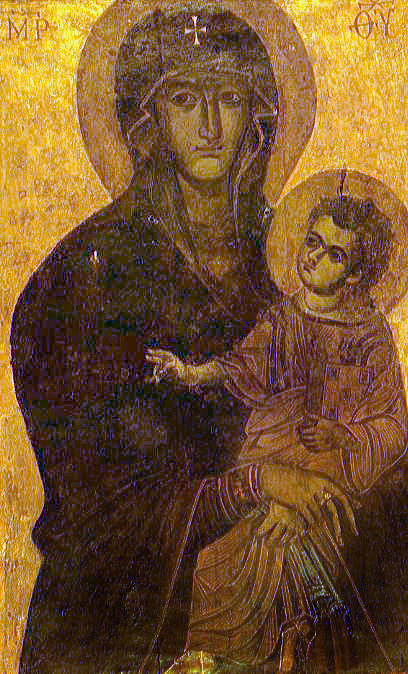 Why is there such a significant difference? I've noticed that depictions of Jesus can vary a fair bit in general, whereas medieval abstract Madonnas tend to be very uniform (minus the late medieval proto-Renaissance depictions which focus on realism more than abstraction). In some of these Madonnas, Jesus is even shown to be balding. How can I understand this discrepancy?

EDIT: Here is the basic difference I'm referring to: why is the baby Jesus depicted so much older? The first image clearly depicts a man in his late 20s/early 30s, with long hair and so forth. The child, however, tends to be depicted as middle-aged, seemingly in his 40s or 50s, and many depictions even show him as balding. What's the reason for making the child middle-aged rather than like the early 30s Jesus we're used to?

As I continued to research this question, I believe I came up with a potential solution. I am not an art historian so take this solution for the grain of salt it's worth. Jesus is thought to have been in his early 30s when he died. (Luke 3:23 states that his ministry began when he was about thirty years of age, and the ministry seems to have lasted three years per the Gospel accounts. That means the Gospel accounts indicate a death of Jesus in his early 30s.) Therefore, you will commonly see depictions of the adult Jesus as a young man, in his early 30s, and this is characteristic of the long-haired depictions commonly seen, such as the one posted by the questioner. However, the way that baby Jesus is depicted in abstract medieval Madonna's is not as a man in his early 30s, but as a homunculus: 'little man', an older, middle aged man, and this is visibly portrayed by rather older, middle-aged facial features, including balding.

Phil Edwards from Vox interviewed the art historian Matthew Averett who explains why Jesus was depicted as a homunculus:

Medieval portraits of children were usually commissioned by churches. And that made the range of subjects limited to Jesus and a few other biblical babies. Medieval concepts of Jesus were deeply influenced by the homunculus, which literally means 'little man'. "There's the idea that Jesus was perfectly formed and unchanged," Averett says, "and if you combine that with Byzantine painting, it became a standard way to depict Jesus. In some of these images, it looks like he had male pattern baldness." That homuncular, adult-looking Jesus became a convention for painting all children. Over time, it simply became the right way that people thought that they should paint babies.

As I noted earlier, a homunculus is a middle-aged looking man, and thus the artistic decision to choose a homunculus to depict Jesus precluded depicting him as a younger man in his early 30s. Thus, the convention was different. And that is why, at least my reason why, baby Jesus in medieval Madonna's digressed from the typical depictions in other forms of Jesus iconography.

5
How thick was Late Medieval horse armor?
6
How common was cavalry in medieval Brittany?
5
What was the medieval attitude to wartime rape?
9
What was preventing the populace from progressing in medieval times?
4
What was the composition of Medieval European armies?
9
How and why buttermilk was added to English medieval butter?
5
When did medieval monarchs start being depicted with ermine fur garments?