Where do Bulgarians originate from?

Bulgaria was formed 1339 years ago. (Then broke up a couple of times.)

In 681 Slavic tribes were occupying the northern border of the Western Roman Empire. Some dudes (led by king Asparuh) (coming from a place named Great Bulgaria; never placed on the map) arrived on horses. The locals peacefully accepted them and thus Bulgaria was formed.

I tend to believe that (given a child-oriented definition of peacefully). But where did those nomads come from?

The idea of horse barbarians is further impressed on by the second siege of Constantinople.

In the schoolbooks it was also heavily stressed they were Tengrist in religion. Thus I would not exclude Mongolian origin.

'Ahmad ibn Fadlan' was sent in the year 921 on a journey through Europe to preach Islam to 'Volga Bulgars' (nowadays Russia). He described in his famous manuscript (sorry, I can't find it now, but I know it's available online) that Balkans are no different to any Turk OR barbarian (in my interpretation).

Bulgarians also tend to have darker skin than Russians.

Bulgarians and Hungarians actually have very different histories. Neither one of them really could be said to have ever been Turks1, although they may have borrowed some things from Medieval Turkic-speakers. 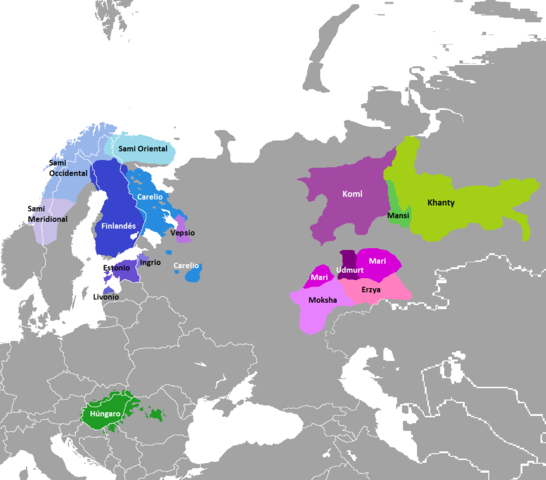 What appears to have happened was that this one group of Finno-Ugric speakers sometime around the first Century picked up pastoralisim from their neighbors2. This is a very large cultural package, but for some reason they kept enough of their identity to keep their language. They first became known to history as the Magyars, the furthest west of the eurasian pastoralists in the mid 9th century.

1 - This answer got merged from another question that was also asking about Hungarians and Turks, which is why there's a lot of content in it about those two peoples as well. I've left that material in, because I think its still interesting, if perhaps now a bit off-topic

2 - Yes, these unnamed example people could well have been Turkic speakers. However, given the geography and timing, Indo-Europeans like the Iranians or perhaps even the Germanic Ostrogoths are much more likely. Another remote possibility is the Huns (whoever they were).

There is a difference between a Bulgar and a Bulgarian.

A Bulgar was a member of a medieval group of nomads which traveled west through Asia and into Europe.

A Bulgarian is a modern day citizen of a country called Bulgaria.

Modern Bulgarians are mostly descended from a mixture of Roman citizens of various ethnic origins living in the northeastern part of the Balkans, and Slavic invaders and immigrants from the north who settled there over generations from about AD 600; with a smaller mixture of Bulgar ancestors who, generations after the Slavs did, invaded and settled in what eventually became Bulgaria.

So any modern Bulgarian is mostly descended from people who were in Bulgaria before the Bulgars arrived, and only with a small percentage of descent from the Bulgars.

The Bulgars who arrived in Bulgaria arrived from Old Great Bulgaria, the latest place that their ancestors had settled in.

The Bulgars (also Bulghars, Bulgari, Bolgars, Bolghars, Bolgari,[1] Proto-Bulgarians[2]) were Turkic semi-nomadic warrior tribes that flourished in the Pontic–Caspian steppe and the Volga region during the 7th century. They became known as nomadic equestrians in the Volga-Ural region, but some researchers say that their ethnic roots can be traced to Central Asia.[3] During their westward migration across the Eurasian steppe, the Bulgar tribes absorbed other ethnic groups and cultural influences in a process of ethnogenesis, including Indo-European, Finno-Ugric and Hunnic tribes.[4][5][6][7][8][9] Modern genetic research on Central Asian Turkic people and ethnic groups related to the Bulgars points to an affiliation with Western Eurasian populations.[9][10][11] The Bulgars spoke a Turkic language, i.e. Bulgar language of Oghuric branch.[12] They preserved the military titles, organization and customs of Eurasian steppes,[13] as well as pagan shamanism and belief in the sky deity Tangra.[14]

The Bulgars became semi-sedentary during the 7th century in the Pontic-Caspian steppe, establishing the polity of Old Great Bulgaria c. 635, which was defeated by the Khazar Empire in 668 AD.

In c. 679, Khan Asparukh conquered Scythia Minor, opening access to Moesia, and established the Danubian Bulgaria - the First Bulgarian Empire, where the Bulgars became a political and military elite. They merged subsequently with established Byzantine populations,[15][16] as well as with previously settled Slavic tribes, and were eventually Slavicized, thus forming the ancestors of modern Bulgarians.[17]

The remaining Pontic Bulgars migrated in the 7th century to the Volga River, where they founded the Volga Bulgaria; they preserved their identity well into the 13th century.[12] The Volga Tatars and Chuvash people claim to have originated from the Volga Bulgars.[12][18]

And before that they came from places farther east, like many other nomadic groups.

Anyway, the Wikipedia article is a first place to start researching the origins of the Bulgars.

Not the answer you're looking for? Browse other questions tagged bulgaria or ask your own question.

-2
What were the origins of the Bulgarian people?

9
Was Sofia really demolished by Bulgarians after 1878 and why?
18
How were the Bulgarians regarded by the Nazis during World War II?
8
Can it be claimed there were Bulgarians in the Balkans before 681 AD?
14
Is there convincing evidence that the language of Bulgars (proto-Bulgarians) was not Turkic, but Indo-European?