Is there convincing evidence that the language of Bulgars (proto-Bulgarians) was not Turkic, but Indo-European?

Wikipedia says that "Bulgar (also Bulghar, Bolgar, Bolghar) is an extinct Oghur Turkic language which was spoken by the Bulgars. "

I was not aware of a different hypothesis on this until I answered this question and, reading this answer I have found this linked article called Y-Chromosome Diversity in Modern Bulgarians: New Clues about Their Ancestry which concludes:

On the whole, in light of the most recent historical studies, which indicate a substantial proto-Bulgarian input to the contemporary Bulgarian people, our data suggest that a common paternal ancestry between the proto-Bulgarians and the Altaic and Central Asian Turkic-speaking populations either did not exist or was negligible.

This line of argument is not impressive. The factual result of the genetic inquiry is that the present Bulgarian gene pool has no significant Turkic ancestry. But a conclusion that the same is true for the proto-Bulgarians can be reached only if "a substantial proto-Bulgarian input to the contemporary Bulgarian people" was a proven fact. (Which is not. The hard fact of present gene pool can be interpreted as insignificant proto-Bulgar ancestry in present Bulgarians.) Also, the conclusion mixes in one phrase genetic and linguistic ancestry.

I think that the question of "a substantial proto-Bulgarian input to the contemporary Bulgarian people" is very difficult to solve, and I imagine it cannot have a clear and definitive answer. What interests me here is a different one — because the same article also states:

I think that this question about the categorization of the (proto) Bulgar language can have a clearly cut answer.

The linked bibliography for that is:

Mänchen-Helfen O (1973) The world of the Huns. Studies in their history and culture. Berkeley: University of California Press.

Page numbers are not mentioned.

To what extent this hypothesis (that the language of Bulgars was not Turkic, but Indo-European) is accepted in mainstream scholarship?

The question is asking about inconsistency between culture (as tracked by linguistics) and genetics. Its important to understand that those are two very different things. People being ...well... people, gene flow isn't really much of a respecter of cultural boundaries.

For example, if you look at a map of the sickle-cell trait, you will see its very common in sub-saharan Africa, but also exists in a non-trivial amount in Greece. Does this mean Greeks are somehow "more African" than other Europeans? Of course not. That trait happens to grant a small amount of protection from Malaria, so what you see in that map is basically a map of where Malaria has historically been enough of a problem to select for that trait. Normal human proclivities, combined with time, did the rest.

Not only that, but you often find a very different story if you study y-chromosome DNA (passed largely unchanged from father to son), and mtDNA (passed only from the mother). This is exactly what that study you mentioned did: it only looked at y-chromosome DNA. To get a more full story, you'd need to also look these same people's mtDNA. For Bulgarians, it appears theirs is very similar to most other groups of Europeans.

Also, reflect that even doing that works out to tracking but two ancestors among thousands of that person's actual ancestors, and you begin to see the scope of the issue. It looks like geneticists have lately been attempting to account for this by doing auDNA studies. This basically looks at everything else, and is argued to give a much better indication of relatedness between populations than using single-sex inherited DNA.

Studies done for that on Bulgarians show them most closely related to other Slavic peoples, and particularly most closely related to other southern Slavs. For historians, and linguists, this is of course incredibly unsurprising information, because it mates up perfectly with both their language's linguistic classification, and the historical record. 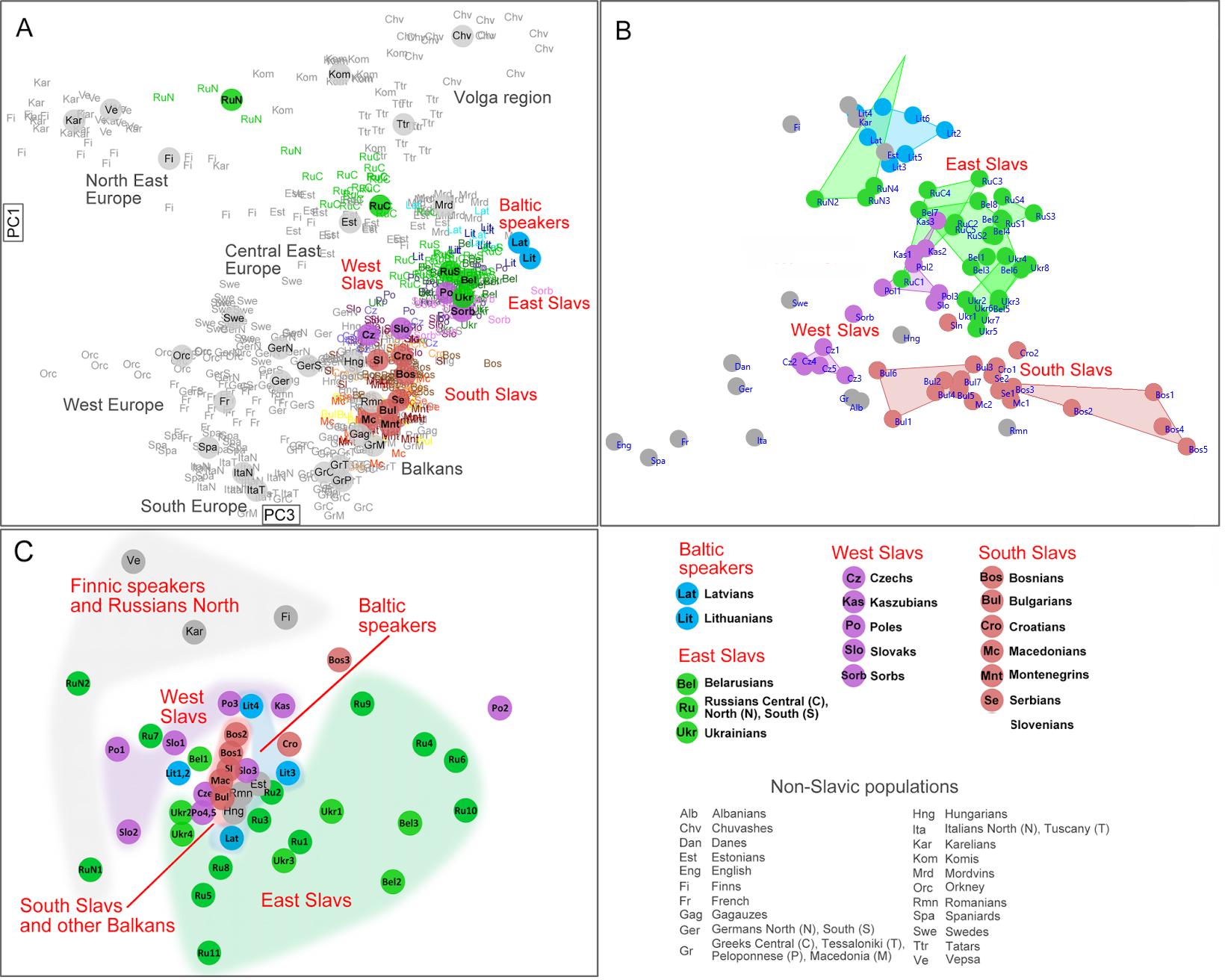 As for the "new studies" on the ancient Bulgar language mentioned in that paper ... I'm afraid this is one of those unfortunate situations where scientific study runs afoul of a country's local nationalist dogma. This kind of thing has been happening around the world a distressing amount lately.

It is particularly silly in this case, because that language did not in fact die out without issue. The Bulgars who stayed behind on the Volga did not magically disappear. The Chuvash language is descended from the Old Bulgar they spoke, and it is still spoken by 1.6 million people in Russia. It is solidly classified as a Turkic language, and back when that classification was in doubt, the other contender (Finno-Ugric) was not Indo-European either.

I found your question when I stumbled on this exact article and was puzzled by the exact same issues you pointed out. The accepted answer summarizes it perfectly, I'm just adding my 2 cents. I am Volga Tatar, and the bulk of my DNA almost certainly comes from Volga Bulgars. When I uploaded my raw DNA file on mytrueancestry.com, it revealed a strong link with Sarmatians (I have ancient relative matches with Sarmatian remains). I estimate that about 25% to 33% of Volga Tatar DNA is from Sarmatian component that Volga Bulgars had.

Sarmatians were Iranic-speaking people who were related to Scythians and lived on the territory of modern Ukraine roughly from 5th century BC to 5th century CE. As I understood it, after the invasion of Huns, Sarmatians ceased to exist, one part of them getting assimilated into early Slavs, another part into Huns/Turks. Bulgars were no exception, looks like they were Turks with significant Sarmatian admixture. Then Bulgars split. Those who went west and mixed with local Slavs became Danube Bulgars, and those who went north-east and mixed with local Finno-Ugric peoples became Volga Bulgars.

Volga Bulgars preserved Turkic identity and a significant portion of Turkic DNA (I estimate that about 33% to 50% of Volga Tatar DNA comes from ancient Turks - not to be confused with modern Turks who also have a lot of native Anatolian DNA that Volga Tatars lack). Danube Bulgars, on the other hand, got increasingly assimilated by local Slavs to the point where modern Bulgarians have very little ancient Turk DNA left, if any.

However, as pointed out above, early Danube Bulgars almost certainly spoke Oghur Turkic, like modern Chuvash do (Chuvash are genetically very close to Volga Tatars, even though modern Volga Tatars speak Kipchak Turkic). The Pamir connection is real, but it would be more accurate to say "Eastern Iranian" in general, rather than specifically Pamir. Sarmatians spoke the language that was probably close to modern Ossetian (which also belongs to Eastern Iranian), and the Iranian influence that the article mentions, while real, is almost certainly a Sarmatian influence on Oghur Turkic. While it's possible that Danube Bulgars had more Sarmatian DNA and less Turkic DNA compared to Volga Bulgars, the link of Danube Bulgars (again, not to be confused with modern Bulgarians) with Turks is still undeniable.

Not the answer you're looking for? Browse other questions tagged language bulgaria or ask your own question.

8
Can it be claimed there were Bulgarians in the Balkans before 681 AD?

28
Why was language not used to establish dominance throughout England 1066 AD–1360s CE?
13
What was the official language used across European monarchies in the XII century?
16
What are the reasons of the ethnical fragmentation of the Caucasus?
16
How is it possible that the Basque language survived until today?
20
Was German ever an official language in the USSR?
8
Can it be claimed there were Bulgarians in the Balkans before 681 AD?
8
How long did Latin survive in Bavaria?
25
Why did the Romans change Europe's language, but the barbarians didn't?
46
Which European Languages are not Indo-European?
10
Was there a European country that held a referendum about adopting English in universities?