Can it be justified that an economic contraction of 11.3% is “the largest fall for more than 300 years”?

Today the UK Chancellor Rishi Sunak said "The OBR forecast the economy will contract this year by 11.3%, the largest fall in output for more than 300 years." This seems to me to be a very strong claim. In particular, comparing modern measures of economic performance to those used in the past 300 years would seem to have enough uncertainty to preclude such a statement of fact. In particular how can one compare this years productivity impact to that of the year without a summer, the loss of UK control over the US or India or to other pandemics such as the 3rd cholera pandemic (which had approximately twice the per capita mortality rate of covid in the UK)?

This answer answers "was 1706 worse than 2020" (the answer being we do not know, but probably not) but not "no other year since was worse than 2020" nor "this measure is/is not a meaningful measure of real economic performance".

(disclaimer: I am not an economist, but I think I have got my head around this)

Two questions: is the claim correct on the basis of the data, and how plausible are those estimates?

The GDP estimates used here are published by the Bank of England, as part of their "millennium of macroeconomic data" dataset (here). You can also get a similar (and somewhat more usable) version of the data from MeasuringWorth; this cleans it up to a couple of key figures, and offers a "historic series" (including Ireland up to 1920) back to 1800, and a "consistent series" (based on current borders) which goes back to 1700. They offer nominal data (values at the time) and real data (adjusted to modern prices). The Treasury and Bank of England appear to be using real data for their comparisons. 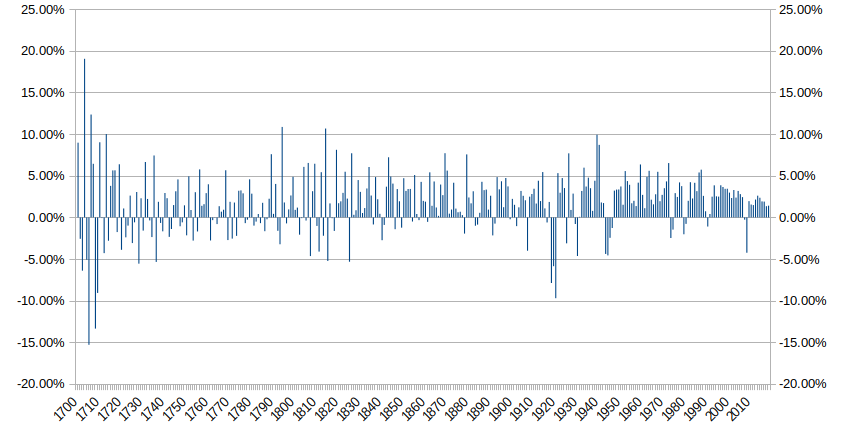 This would suggest that a drop of 11% would indeed be worse than the single-year drop in 1919, 1920, or 1921, though not worse than the sustained drop of the three together. Before that, though, it looks like the worst single year since the early eighteenth century.

So, yes, on the basis of the estimated data the claim is correct.

But how did we get those estimates?

The appendix in the Bank of England guidance note, and the notes on MeasuringWorth, break the sources down as actual data since 1948, estimated data from historians before that, in various sections dovetailed together.

The 1700-1830 data is derived from this study, which essentially works it out by aggregating data on what the economy did in those years - how many acres were farmed, how big was the harvest, how productive was industry, how much did government spend, etc. While we don't have national accounts in the same way that we do now, we do broadly have enough data to be able to make yearly estimates like this.

The appendix to the study is quite interesting - it outlines the various existing estimates they drew on and breaks down how much of those made up the estimates for each year. For example, we have an estimate of what share of the agricultural economy was pastoral vs arable, what share of arable farming was various different crops, what the annual yields and prices for each were, and so on.

These were then all compared to a benchmark year (1841) and values calculated by comparison. This gave real values based on 1841 real values. Nominal values were then estimated, derived from the real value estimates.

(The figures quoted in the other answer are based on nominal, not real, GDP. Given that the estimates worked out real GDP and fitted nominal to it, I suspect it is a more meaningful measure of year on year changes. But I am definitely not an expert here, so take that with a pinch of salt.)

Thinking about this as a series of different estimates bolted together also makes the larger fluctuations in early years make more sense. A larger share of the national economy was agricultural in those years, so a harvest failure in 1700 would have a lot more effect on the headline figures than the same harvest failure in 1900. Similarly, this helps explain why we see very good years alternating with very bad years - a bumper harvest in one year and a crappy harvest the other means a very large relative swing. (Note that 1704 and 1707 are the best years in the analysis!) Things get more consistent year on year in the 19th century, where industrial and commercial activity is beginning to dominate, and annual harvest differences don't have as dramatic an effect on the overall economy.

So... how reliable are all these estimates? I think, broadly, they make sense, treated with a bit of healthy caution. It probably isn't meaningful to talk about one year having an 5% drop and another an 5.3% drop, but it seems very likely that they can tell us the difference between a mildly bad year, with a 2% drop, and a very bad year with an 8% drop, or between a mildly good year and a mildly bad one. And looking at the extreme years, these estimates suggest no year in most of the 18th or the entire 19th century was as bad as 1706 or 1709-10.

I think the very substantial magnitude of these drops probably outweighs the margins of error on them, and makes it possible to say that there has not been anything like them since, saving perhaps 1919-21. However, our estimates for 1919-21 are a bit more robust than the ones for two centuries earlier - we have better data - so if we can be confident that the drop in 2020 is worse than any of those three years, then it is very likely that it is also worse than anything since the early 1700s.

Of course, there is still the open question about nominal versus real GDP, as noted earlier, which can give some years showing more substantial drops. I'm not confident in answering which of those is more "correct", but my feeling is that if the Bank of England and the Treasury consistently use the real estimates, those are probably the most appropriate ones to go for. Certainly they seem to be the context in which the claim is being made.

You should treat these numbers with a healthy dose of skepticism since they are based on estimates rather than solid records. The numbers used by Sunak are consistent with the estimates given by the BoE: 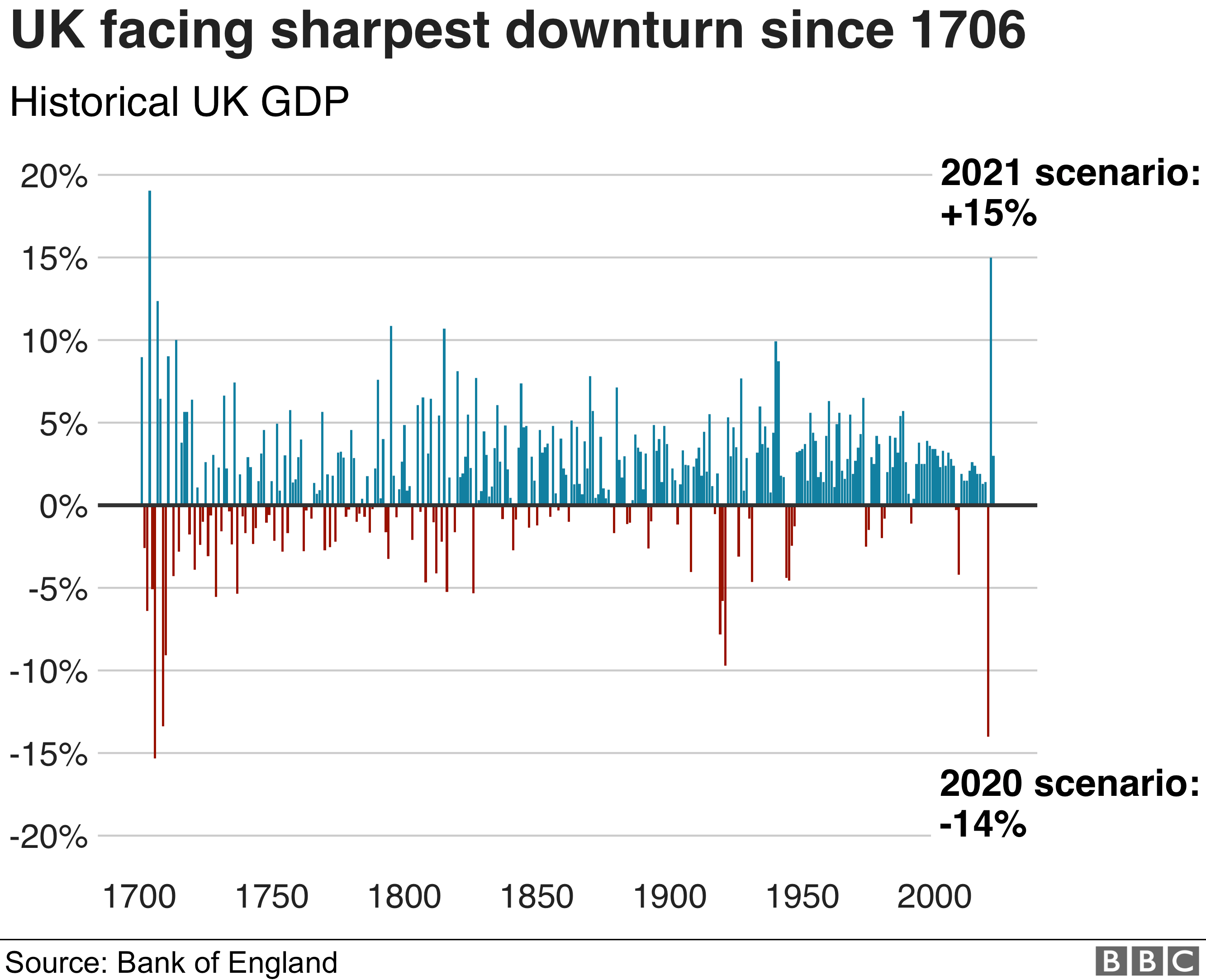 However, if you look for instance here for the estimates of the annual British GDP (not taking colonies into account), you will see for instance a higher than 12% estimated annual GDP drop-off in 1802, 1816 (the Year Without Summer) and 1826. (I only looked at that time interval.)

Edit 1. For the sake of completeness: The linked graph is from May of 2020 (BBC article here). The estimates back then of the annual GDP contraction in the UK were 14% which would have been higher than the ones for the early 19th century not only according to the BoE estimates, but also the estimates from the ukpublicspending link above. The historic data in the link is apparently coming from MeasuringWorth Foundation which appears to be run by well-respected economic historians.

All numbers are in 1700 prices, in millions of pounds.

Not the answer you're looking for? Browse other questions tagged economy united-kingdom disease or ask your own question.

7
Was there a contemporary understanding that 1706 was an exceptionally poor year?

38
Did the end of the British Raj in India create an economic loss for Britain?
23
What did Germany do after World War II to recover so successfully that it became more prosperous than its WW2 victors?
1
Where can you find online the voting records for the both Houses of the UK Parliament?
5
What were the largest European Treasuries, in gold and silver, at the end of the Seven Years War?
26
What was the economic basis for West Berlin?
3
Context for peace between UK and Germany around the Fall of France
7
Was there a contemporary understanding that 1706 was an exceptionally poor year?