Did any of the bystanders express their reactions after realizing that they'd experienced the death of Antoni Gaudí?

Gaudí's death, on 7th June 1926, when he was struck by a tram while crossing a road, is generally described in narratives along the lines of 'the unkempt look of the wounded person made the onlookers delay with calling for assistance'. This is, for example, the story as provided on Wikipedia, with the first person who recognises Gaudí as Gaudí said to be Mosén Gil Parés on the following day. Wikipedia notes three books as sources for the above.

What I'm wondering is whether the few people who helped Gaudí realized they were assisting him? Alternatively, did any of the other onlookers (who didn't help) comment on their inaction after realizing it was Gaudí they ignored?

A more coherent narrative of Gaudí's death is provided here (translated from Spanish or Catalan based on the spelling (errors)—which I preserved for this copy as in the source):

The Catalan architect, key figure of modernism and one of the pioneers of the avant-garde of the twentieth century, is hit by a tram.Lying on the sidewalk, his unkempt appearance condemns him. He died three days later.

... The artist receives a terrible impact on the ribs and temple. Critically injured, he is lying on the ground unconscious.

His worn clothes, fastened with safety pins instead of buttons and dusty shoes that cover their wrapped in strips of cloth feet, give a poor appearance.

Most passersby, taking him for a beggar because of his unkempt appearance, denied their help. Only two of them are offered to assist him: Antonio Roig, managing the port, and Antonio Noria. They are trying unsuccessfully to arrest four taxis; the first three refuse to transport the wounded, fearful that the blood staining the upholstery of their vehicles. The fourth not even stop to see the body lying on the sidewalk.

A policeman approaches the tumult surrounding the artist and imposing his authority, requires a taxi to take him. To ensure that it will be properly cared for, he rises to the vehicle. The officer ordered the old man to move to the nearby dispensary Round San Pedro, 37.

The logbook will record center cursory examination of the wounded: ‘trauma at the height of the right ear and commotion of the patient, who calls himself Antonio Gaudi … It seems that the artist is appreciated regained lucidity for a brief moment, long enough to provide their identity, so far unknown data because the artist was undocumented. In their pockets not wearing more than the book of the Gospels, a rosary, a handkerchief and the little key from his desk.

The doctor on duty, to the serious condition of the injured, ordered his transfer to Hospital after administering a spasmodic.

Finally the fate wants Gaudí is transferred to the Hospital de la Santa Creu, but it’s too late. The next day is recognized by the chaplain of the Sagrada Familia, Mosen Gil Parés, good friend.

This account seems to be a (machine or just poor) translation of the newsitem from La Vanguardia which also names the policeman as Ramón Pérez. A similar French narrative is here with items that look like newspaper cutouts, but I can't see (zoom to) when they are from.

What I'm wondering is whether Antonio Roig or Antonio Noria realized that it was Gaudí they were helping—and left an account of their own thoughts about the event. The policeman's notes shows that he had heard, but might not have believed the statement that the dying man was 'Antoni Gaudí' (or he might have had him taken to a better hospital to begin with). Did Ramón Pérez comment on this event at all? Or, did any of the other onlookers (noted in the above as "most passersby denied their help" or "la mayoría de los transeúntes le niegan su ayuda") comment on how they didn't help the old architect?

Nice question. According to C.Martinell's book

Gaudí: his life, his theories, his work. — Cambridge, Massachusetts: The MIT Press, 1975.

pages 116-118, nobody kew, at first even in the hospital where Gaudi was taken after the accident. I do not see any reason to doubt Martinelli's account: 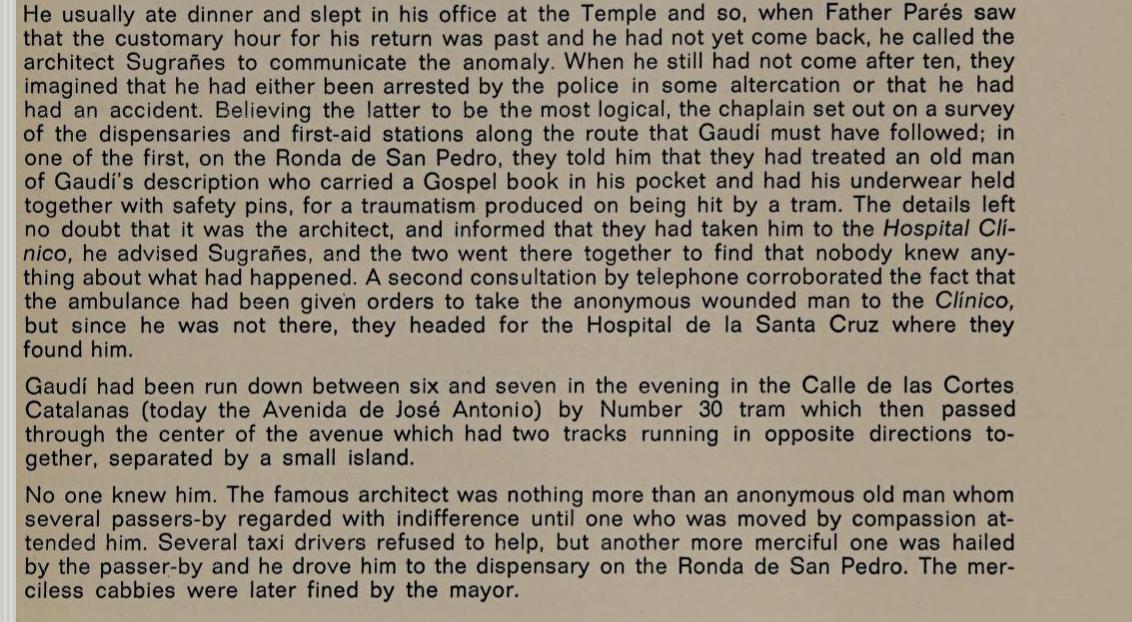 Not the answer you're looking for? Browse other questions tagged death individuals catalonia or ask your own question.

8
When did the Greeks start the practice of burying their dead relatives' bodies?
7
How did England react to the arrival of the Black Death?
5
Did people on the Bridge of Death in Pripyat actually die?