Question: when did someone first call the astronomical objects that orbit planets "moons"? More precisely, I'm probably looking for the first use of lunae in this context. I assume that "moons" would have been a translation of the Latin word which astronomers tended to prefer.

Context: I was trying to answer this question from the Astronomy Stack Exchange: Do our sun and moon have names? but I've gotten stuck. The question as asked is backwards. The other planets' "moons" are named after the Moon and not the other way around. We call Earth's natural satellite the Moon because Middle English-speakers called it mona. And if we trace this word's origin back as far as we can, the theoretical Proto-Indo-European-speakers called the Moon *mḗh₁n̥s, probably from the root meh₁- which meant to measure, since the Moon was used to measure time (Wiktionary — Reconstruction:Proto-Indo-European/mḗh₁n̥s).

So there's a compelling theory about why we call the Moon the Moon, but why do we call other similar astronomical objects moons?

The naive, or the partial answer is that someone chose the word moon because these other bodies closely resembled the Moon. But this glib answer presumes that people in the past shared our current understanding of astronomy, and this is not true.

When Galileo first spotted the three (and then later the fourth) objects arrayed in a straight line near Jupiter, he described these objects as Stellae ("stars") and as Planetea ("planets") (Wikipedia — Sidereus Nuncius. You can see a use of Stellae in one of the pictures on that site (File:Medicean Stars.png). When giving them a proper name, Galileo initially chose Cosmica Sidera ("Cosimo's stars") and later Medicea Sidera ("the Medician stars").

To Galileo, it was not obvious that these objects were more similar to the Moon than to other celestial bodies. So who made the connection?

Also Interesting, but not the Answer: Johannes Kepler was apparently the first person to call the Galilean moons satellites, extending the meaning of the Latin word for "a body-guard, a courtier; an assistant" (Online Etymology Dictionary — satellite).

Chistiaan Huygens in 1656 is the first documented evidence.

The invention of the telescope limits this to after 1610. Since Galileo was the first to observe such objects, it was Kepler who in 1611 called them satellites in his Narratio de observatis a se quatuor Iovis Satellitibus erronibus. Which is about 'the Satellites wandering about Jupiter'.

The comparison to Earth's moon was then made by Huygens, who called Saturn's Titan a/his "luna" and provided a rationale for making this comparison:

As confirmed by this article:

Christiaan Huygens, the discoverer of Titan, was the first to use the term moon for such objects, calling Titan Luna Saturni or Luna Saturnia – "Saturn's moon" or "The Saturnian moon", because it stood in the same relation to Saturn as the Moon did to the Earth.
— Gravity Wiki: Natural satellite

Apparently the earliest surviving copy of that text is found in a history book about the invention of telescopes, published almost immediately after Huygens first observation and conclusion, Huygen's text just slapped on for good measure to increase the length of the book. 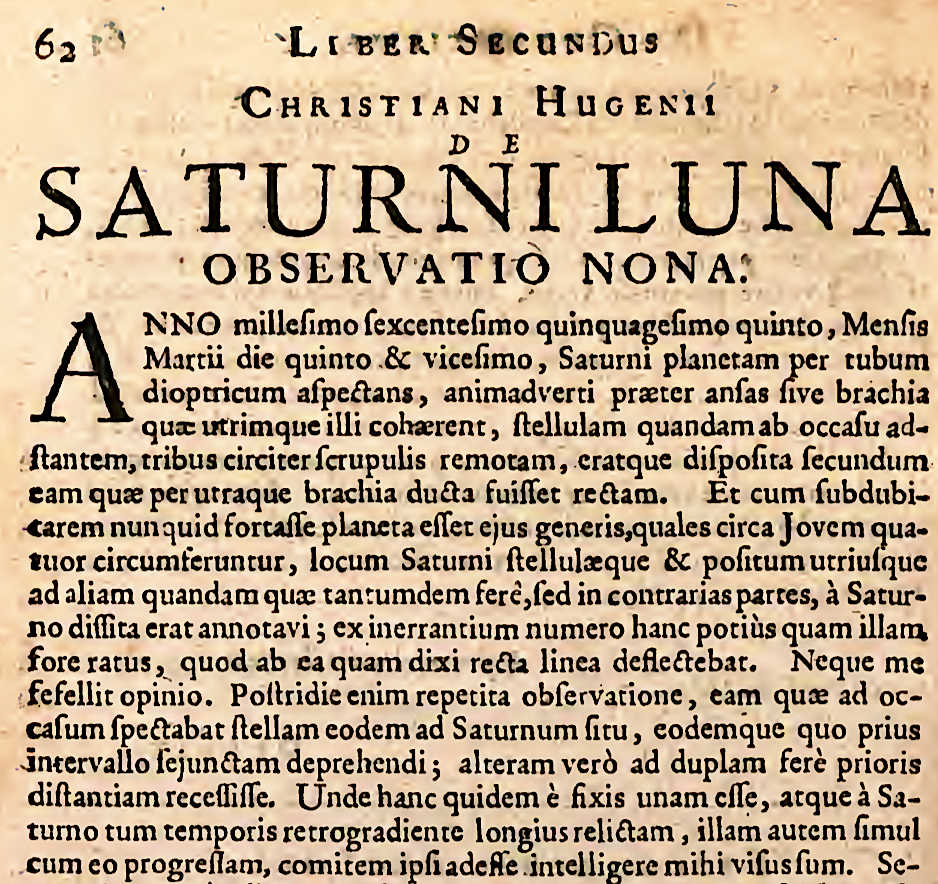 A note on the timeline of confusing dates: Huygens discovered the object we now call Titan in March 1655, published a rushed but cautious pamphlet already calling it "Saturn's moon" in The Hague in March 1656. He did this because he wasn't really sure about all he concluded from his discovery but wanted to assure his primacy on this discovery in a time before copyright.

In that Latin paper we see all the terminology current at the time. Those objects around Jupiter were the most obvious to compare and those are called variously "star" (stellulam), "satellite" (novus Saturni satelles), "planet" (planeta), "Medicaen planet" (Mediceos Jovi |named after the Medici), "companion", "follower". He already concludes that neither Jupiter's nor Saturn's 'planets' are properly called 'planets', as they are different from those in orbiting not the sun, but orbiting an object that orbits the sun. A difference in properties he claims no other astronomer before had recognised nor taken into account.

But as the very title of the pamphlet shows, his synonym Moon=satellite was already there, and within the text he just goes on to make this comparison:

It took a little while longer for him to publish his full treatise on why the moon of Saturn is really much like Earth's moon, together with his explanation of Saturn's rings in his Systema Saturnium in 1659.

In this we find his explanation, him still juggling with other terminology of planets, star, satellite, for the 'new', 'Saturn's moon', and the moons around Jupiter:

Now I was greatly helped in this matter not only by those more genuine phases, but also by the motion of Saturn's Moon, which I observed from the beginning; indeed it was the revolution of this Moon around Saturn that first caused to dawn upon me the hope of constructing the hypothesis. The nature of this hypothesis I will proceed to explain in what follows.

When, then, I had discovered that the new planet revolved around Saturn in a period of sixteen days, I thought that without any doubt Saturn rotated on his own axis in even less time. For even before this I had always believed that the other primary planets were like our Earth in this respect that each rotated on its own axis, and so the entire surface rejoiced in the light of the Sun, a part at a time; and, more than this, I believe that in general the arrangement with the large bodies of the world was such that those around which smaller bodies revolved, having themselves a central position, had also a shorter period of rotation. Thus the Sun, its spots declare, rotates on its own axis in about twenty-six days; but around the Sun the various planets, among which the Earth is also to be reckoned, complete their courses in times varying as their distances. Again, this Earth rotates in daily course, and around the Earth the Moon circles with monthly motion. Around the planet Jupiter four smaller planets, that is to say Moons, revolve, subject to this same law, under which the velocities increase as the distances diminish. Whence, indeed, we must conclude perhaps that Jupiter rotates in a shorter time than 24 hours, since his nearest Moon requires less than two days. Now having long since learned all these facts, I concluded even then that Saturn must have a similar motion. But it was my observation in regard to his satellite that gave me the information about the velocity of his motion of rotarion. The fact that the satellite completes its orbit in sixteen days leads to the conclusion that Saturn, being in the centre of the satellite's orbit, rotates in much less time. Furthermore, the following conclusion seemed reasonable: that all the celestial matter that lies between Saturn and his satellite is subject to the same motion, in this way that the nearer it is to Saturn, the nearer it approaches Saturn's velocity. Whence, finally, the following resulted: the appendages also, or arms, of Saturn are either joined and attached to the globular body at its middle and go around with it, or, if they are separated by a certain distance, still revolve at a rate not much inferior to that of Saturn.
— In 1659 Christiaan Huygens published an article on Saturn's Ring in Systema Saturnium. The translation below is based on that made by J H Walden in 1928.

A nice outline of the events unfolding is to be read in the title:
— Albert van Helden: "'Annulo Cingitur': The Solution to the Problem of Saturn", Journal for the History of Astronomy, Vol. 5, p.155, 1974.

This was for the concept of using a word for our moon to describe other celestial bodies that are natural satellites to other planets. But that went all on in Latin, the language Huygens used.

In English we see the Oxford English Dictionary give the earliest attestation at 1665 (as shown in justCal's answer with the following description:

This is found in good visual quality in Vol 1, No 4, but on page 74 in the article "A Further Account,Touching Signor Campani's Book and Performances about Optick-Glasses (pp. 70-75)"

This is however preceded by at least Robert Hooke's book Micrographia, which was published in the same year, albeit already in January, and as per imprint was ordered into printing on November 23. 1664:

This will seem much more consonant to the rest of the secundary Planets; for the highest of Jupiter's Moons is between twenty and thirty Jovial Semidiameters distant from the Center of Jupiter; and the Moons of Saturn much about the same number of Saturnial Semidiameters from the Center of that Planet. (p240)
— Robert Hooke: "Micrographia", January 1665. (archive.org)

Since the earliest pamphlet by Huygens was also sent to England (as in the Hartlib-source link above), where it might have been translated and shown around early, and surely discussed in the local tongue, and both the Philosophical Transactions as well as Hooke use it without much explanation: an even earlier date seems quite likely for a direct usage of 'moons' in this sense in English.

A publication from 1665, Philosophical Transactions, in an article which tosses about names like Huygens and Cassini, has a discussion concerning a publication by Giuseppe Campani. 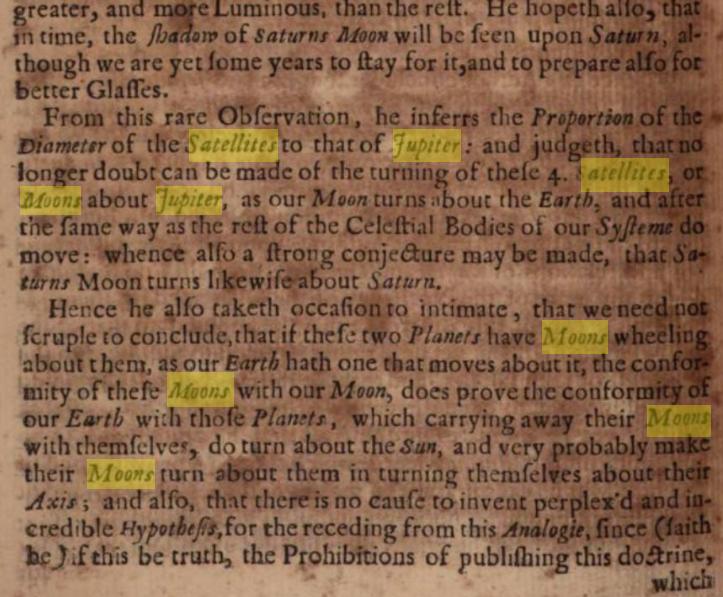 This article discusses the similarity between Earth's moon and the satellites observed around Saturn and Jupiter, including a transition in terminology in the middle of the paragraph:

no longer doubt can be made of the turning of these 4 Satellites, or Moons about Jupiter, as our Moon turns about the Earth.

If these observations were those of Campani, his work might hold your Latin root. Regardless you can at least narrow your answer to on or before Monday, June 5, 1665.

Not the answer you're looking for? Browse other questions tagged astronomy history-of-ideas or ask your own question.

26
Who discovered first that the Moon does not have its own light?
3
What was the first political document that invoked the interest or betterment of humanity?
32
What was the first solar eclipse that was demonstrably predicted in advance?
11
When did scientists first postulate that Earth's atmosphere might have an upper limit?
9
When did people first recognize the estimate sizes/scales and nature of celestial bodies?
2
When is the first recorded instance of someone dying for a principle?
4
Who is “Rhadir of Seville”?