In real terms how many alcoholics were there before prohibition vs after prohibition?

I would like to know the actual number of alcoholics and/or the rate of alcoholism say in 1918 and 1933. Many thanks. 🤔

First off, I want to reiterate what Mark said in the comments. The question is inherently an anachronism, because we didn't have the concept of "Alcoholism" back then. The evils of drunkeness were of course a big concern, but it seems to have been mostly thought of in terms of being the fault of the evil substance itself, along with the inherent moral weakness of those (largely racialized immigrants) thought to be largely consuming it, and the greed of those profiting by selling it to them.

You'd think we might at least have some kind of public polling to look at, but in fact scientific public polling wasn't really invented until near the end of prohibition. This has caused issues with us answering Prohibition questions before.

However, we do have some data to look at. For tax reasons US consumption has been tracked going back almost 2 centuries. That can be broken out per/capita pretty easily, and if human beings aren't too horribly different now than in 1850, perhaps we can assume that similar numbers then and now belie somewhat similar behavior. 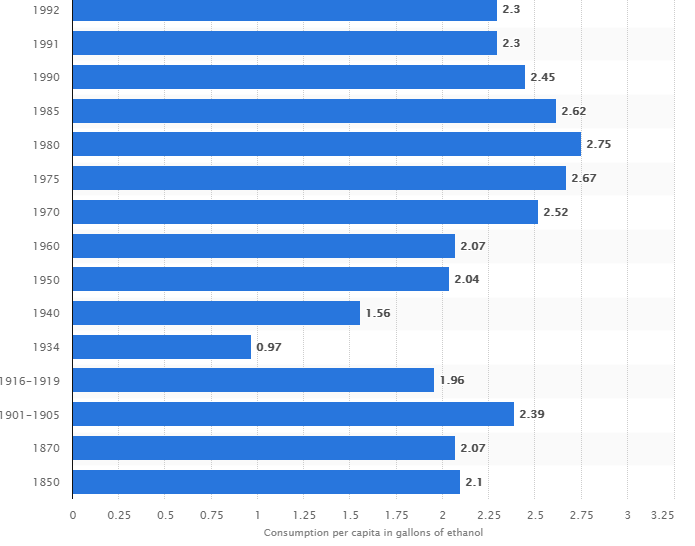 To put some markers around these numbers, the ASL started its nationwide prohibition effort around 1913, culminating with the passage of the 18th Amendment (National Prohibition) in 1920. It was repealed by the ratification of the 21st Amendment at the end of 1933, but also required a statewide repeal in a few states.

Also worth noting is that large surge in per-capita consumption in 1901-1905 may well have been somewhat of a driver in getting the US Prohibition movement the traction it needed.

There are no reliable numbers available on that. Research on this was practically lobotomised.

The words alcoholic and alcoholism became coined and then used between

"disease of alcohol addiction," by 1882, from alcohol + -ism, or else from Modern Latin alcoholismus, coined in 1852

But the concept of 'alcohol-related addiction disease' was already known, especially in America, thanks to Benjamin Rush, co-signer of the Declaration of Independence and now credited as being the father of American psychiatry. He published in 1784 a pamphlet that discouraged use of all distilled liqour – which he called 'ardent spirits' – and set the tone and pre-formulated nearly all arguments the temperance movement later adopted and promoted for more than a full century to follow.

Prohibition itself then had the known as harmful effects on a broader societal level while doing 'not much good for the alcoholics' either:

During the period prohibition was in effect, from 1919 to 1933, there were significant changes in drinking patterns, as well as broader social and economic changes. There has been a tendency to attribute everything that happened in the 1920s to prohibition.

Several important changes in drinking patterns occurred during the prohibition era. First, there was significantly less per capita alcohol consumption among the working class; prohibition made alcohol expensive and many people could not afford to drink very much. Second, under the conditions of prohibition beer and wine were difficult to make and ship - thus distilled liquor, easy to produce and transport, became a more common beverage. Third, there was the increasing acceptance of drinking among the middle class, and some increased consumption among the middle and upper class youth and women. And fourth, there was the full emergence of a new institution, 'night clubs' for the middle and upper class which served dinner and drinks, and had jazz music and dancing.

These differences among groups highlight that just looking at the raw numbers across all of society may produce a picture as blurry as ethanolic inebration vision itself. What's more, with nation-wide prohibition in effect, the medicalised approaches of disease already common from the time of Rush were all but forgotten and subsequently what was known before was actively and completely ignored. Thus, after 1920 there were no more alcoholics – by definition – but only 'weak and vile bad persons'. 'Vice by choice':

With Prohibition, the alcoholic was again viewed as a moral weakling whose only options were the jail cell or, if mentally impaired, the psychiatric hospital. The knowledge base of inebriety experts was likewise discarded, dismissed, or forgotten by most of the researchers who would investigate alcoholism following Repeal. Chauncey Leake was one of the few post-Repeal alcoholism experts to recognize this, observing in 1957 that even though some of the “best American physiologists, pharmacologists, and clinicians”— men such as John Shaw Billings, Russell Chittenden, and William Welch—had scientifically studied alcohol’s actions on body and mind and published their two-volume report, Physiological Aspects of the Liquor Problem, for a general audience, it was “astonishing how little appreciation has been given to this important work, and it is amazing how little it is known. Indeed, the general history of alcoholism has hardly been explored. Much might still be learned from the early clinical accounts.” In their haste to distance their efforts to combat alcoholism from the wet-dry politics of the previous generation, most alcohol researchers in the 1940s and 1950s dismissed the research findings of their predecessors. Unfortunately, this meant that alcohol and alcoholism specialists of the mid-twentieth century spent a great deal of time reinventing the proverbial wheel.

It also means that in that era of general ignorance no proper diagnostic data could be created, nor is it available in any direct form.

We therefore indeed need some proxies as data points.

From the above book we see some interesting ones:

From an aggregate view and in unfortunately only raw numbers, we see a dip in overall consumption, that recovered and then rose to pre-prohibition levels.

This study claimed to have been the first of its kind since the end of prohibition and is widely cited as the best proxy for the numbers sought.

But this overlooks that we can assume that this societal approach produced over all a lot of very problematic drinking patterns. Although how those would translate into medical effects in terms of alcoholic dependence disease is neither straightforward, nor known, for today.

“Prohibition’s only virtue was that it was better than no whiskey at all.” Put differently, proscriptions against alcohol use have rarely been as effective as social prescriptions for alcohol use. First, cultures that teach children to drink responsibly, cultures that have ritualized when and where to drink, tend to have lower rates of alcohol abuse than cultures that forbid children to drink.
[…]
In contrast, the greatest lesson of Prohibition in the United States was the futility of trying to use laws alone to combat alcohol abuse. From 1919 to 1932, the Volstead Act produced a modest reduction in alcohol production and consumption in the United States. The overall problems arising from alcohol consumption were by no means ameliorated by Prohibition; but between 1919 and 1932 the risk of death from cirrhosis did decline to a statistically significant degree (Terris 1967), and a 30 percent reduction in per capita alcohol consumption endured until 1940 (Haggard and Jellinek 1942). The overall failure of Prohibition, however, illustrated that in the absence of cultural support legal proscription of alcohol per se will be an ineffective remedy. […]
[…]
Indeed, the reduction in U.S. per capita alcohol consumption from 1933 to 1940 may have had as much to do with the Depression and reduced discretionary income as with the aftereffects of Prohibition.

Perhaps a more drastic picture emerges when looking at graphs showing the abysmal effect prohibition had on the most heavy drinkers: 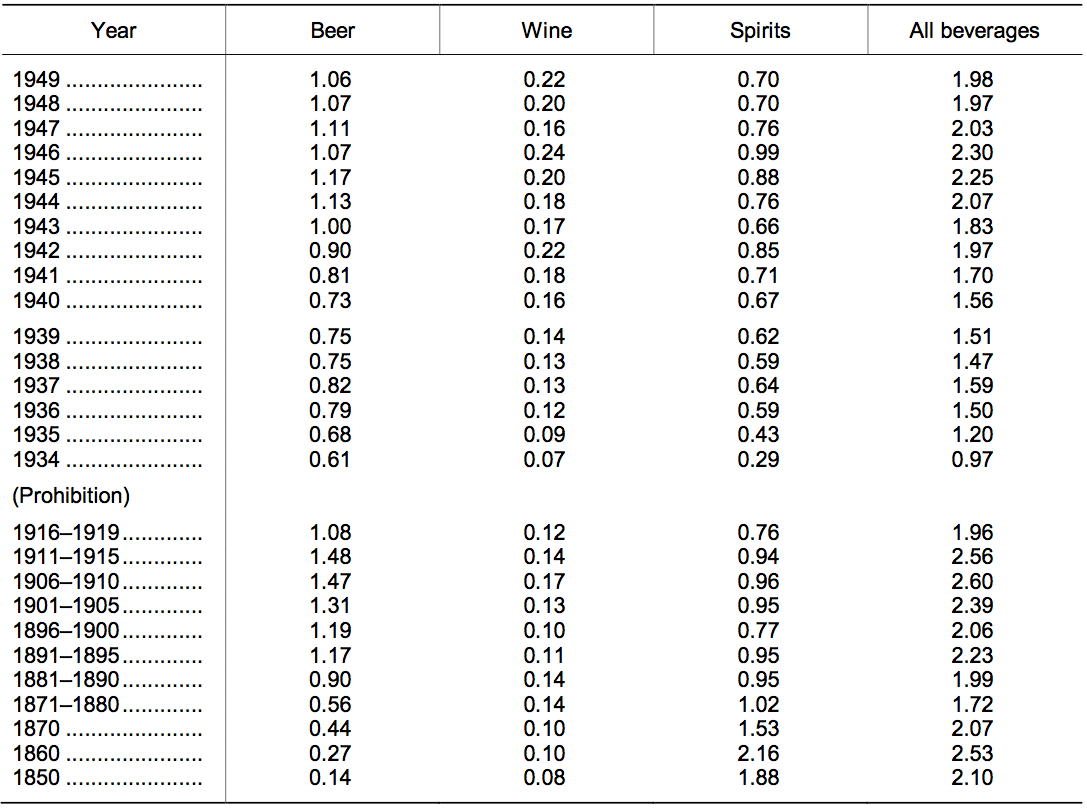 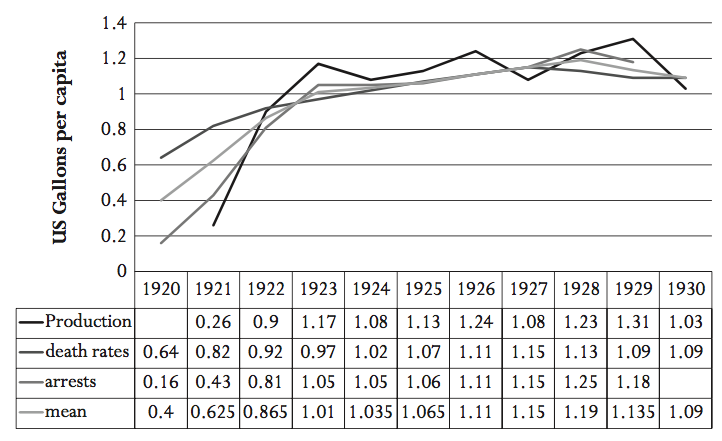 (Estimated per capita alcohol consumption from various sources (Warburton, calculated in 1930, during prohibition)) 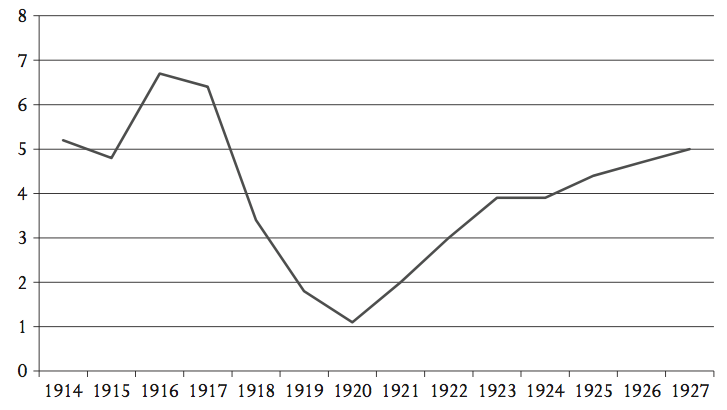 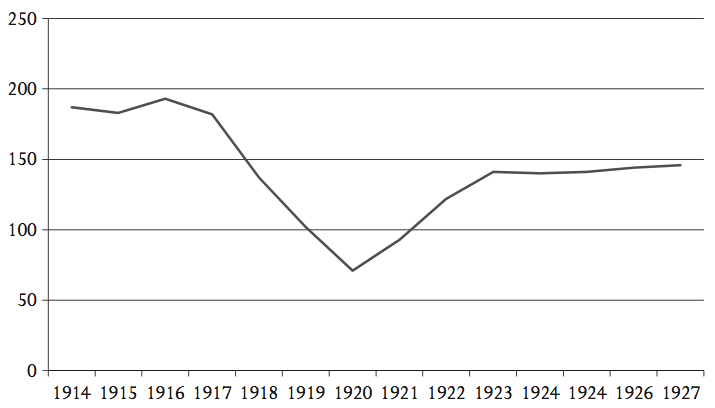 Not the answer you're looking for? Browse other questions tagged prohibition or ask your own question.

21
To what extent was prohibition supported by the American public?

9
Was “the modern cocktail” intended to mask the foul taste of Prohibition-era liquor?
10
During the U.S. Prohibition, how did they get away with drinking alcohol?
21
To what extent was prohibition supported by the American public?
51
How did the authorities not find the speakeasy clubs during the prohibition?