I was recently asked why medieval castles would have both a drawbridge and a portcullis. After giving an explanation, I realized that it was just an assumption, and I had no sources for what I’d said.

For as long as I can remember, I’ve assumed that the reason for having both is that each had a complementary action – the portcullis could block the entrance very quickly (under gravity) whilst the drawbridge could open the entrance (i.e. be lowered) just as quickly. Using the two together would give the defenders a method of letting small groups of allies through the defenses with little chance of the attackers breaking through. If the defenders want to (for example) send out a raiding party, they can start by slowly raising the portcullis, then at the right moment drop the drawbridge, let the group out, and then rather than having to rely on slowly and laboriously winding the drawbridge up to secure they castle again, they can release the portcullis and be secure again in a fraction of a second. Once the portcullis is down, the castle is secure they can take their time winding the drawbridge back up. Similar idea for when the raiding party comes back.

So, is the above just a mis-remembered story on my part, or is there any truth to it? How would drawbridges and portcullises be used together, and are there any explanations in the historical record?

Any gate is, by definition, an opening in the stone curtain wall that is the main defense of the castle. A pulled up wooden drawbridge is much less secure than the stone wall:

Hence even in the presence of a drawbridge, not having a portcullis or equivalent is a gross defensive weakness. It's hard to imagine any designer/constructor getting away with such an egregious oversight.

That being said, the practice of pulling up the planks on a permanent bridge was a common defensive maneuver and the work of only an hour or two (even on a lengthy river bridge, never mind a moat bridge of only a dozen or so feet) for a team of properly equipped men. The armies of both Napoleon and Charles both engaged in this repeatedly in the 1809 Bavarian Campaign, most notably at Landshut, Kelheim, and Neustadt (where the planks were hidden in the forest so the local population could not immediately restore them)1.

Hence while a drawbridge on a castle gate is optional, the portcullis (or equivalent) never is. Security of the castle requires a substantial fireproof closure on each gate house entrance. The design of actual gate houses, with double or triple portcullis separating multiple foyers topped by murder holes (meurtrières) makes clear that considerable investment was made to make a gatehouse the most, not least, secure point on the castle's exterior. 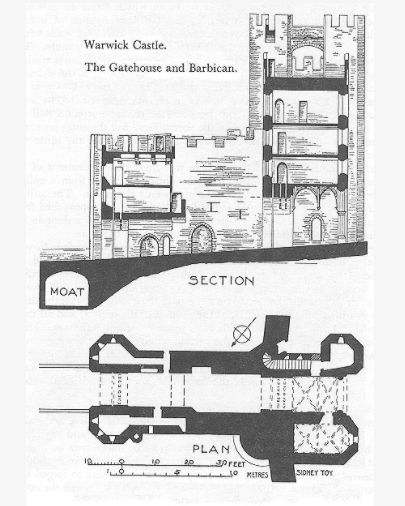 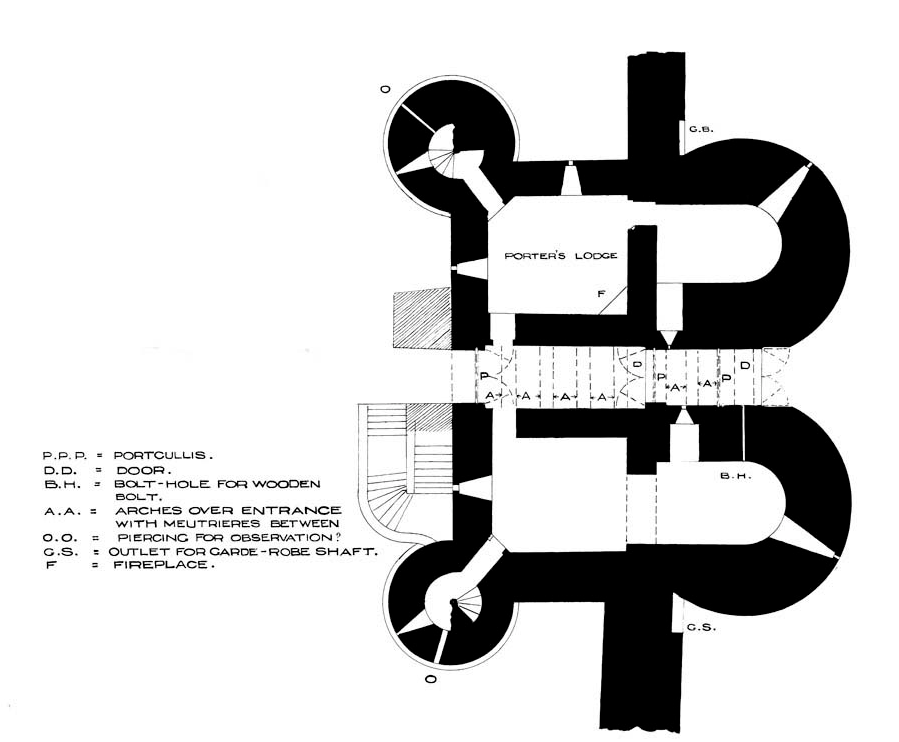 Further, the counter-weight, chains, pulleys, ropes, and winch of a drawbridge are expensive both to construct and maintain (viz chains rust, ropes rot, etc.), as well as requiring considerable space within a very specific location: the castle gate house. Whether the cost in capital, expense, and space was worthwhile would depend critically on the specific tactical purpose of the castle when under siege:

In conclusion, let's study the specific tactical feature of a drawbridge: facilitating a sudden (drawbridge can be lowered quickly) mass sortie (main gate accommodates much more traffic than a narrow postern gate) to be prepared unseen (portcullis covered by raised drawbridge is hidden) by the besiegers - in a strategic circumstance (a large garrison surplus to the purely defensive needs of the fortress) where such a sortie is wise and a tactical circumstance (the surplus garrison sortieing is small enough to do so across the drawbridge yet large enough to be an effective sortie) where it's practicable.

Recall that a castle is secure against starvation, thirst, and time, the most effective weapons of a besieging force, only to the extent that food and water can support the garrison, Thus most castles were designed to hold out with a minimal garrison, often just a few dozen defenders, against a much larger force numbering in hundreds or thousands, for months. Sortieing wasn't part of the defensive plan.

Given the above, drawbridges would seem most suitable to circumstances where:

Only the second of these circumstances comprises a tactical use of drawbridges. As for portcullis, they are always an essential element of defense both tactically and strategically, regardless of a drawbridge being present or not.

A drawbridge is just a special kind of bridge, and should be considered as such. Imagine a castle built on an island. You would need a bridge to reach that island.

In the Middle Ages, people would create such an "island" by building a moat around the castle. Then you would need a bridge to reach the castle. But you don't want a "permanent" bridge that would allow your enemies to follow you to your castle. Instead, you want a bridge that can be pulled up after all your troops are safely inside the castle, and before the enemy arrives. It is this lack of "permanence" that gives a drawbridge its defensive value.

The weakness of a drawbridge is that it is a wooden "door" that the enemy can either burn or break down relatively easily. Hence, the entrance behind the drawbridge had a metal portcullis that didn't have these weaknesses. Without it, a drawbridge would be a major liability.

The reason the drawbridge is used is because the moat is a major defensive feature, presumably enough so to more than cancel out any deficiencies of the drawbridge. The portcullis did the rest of the work.

As for tactical maneuvering described in your question, this was seldom done. Almost by definition of a siege, the defenders were heavily outnumbered by their attackers, and only in the rarest of circumstances would they seek to exit the castle and counterattack. Their safest place was in the castle. If they lost there, they would probably lose anywhere else.

Not the answer you're looking for? Browse other questions tagged middle-ages tactics castles or ask your own question.

3
What were the expectations of a medieval castle or fortress hoping to break or outlast a siege?

7
How were war elephants used against cavalry?
8
How were mounted infantry (like dragoons) used in battle?
11
What exactly were currours, and what were they used for?
96
Why were old fortifications shaped like stars and not like circles?
6
How heavy were the heaviest war hammers actually used?
3
What techniques were used to make rings in medieval times?
4
What were the grooves in the side of the walls at the rear entrance of Harlech and Beaumaris gatehouses for?
34
How were medieval castles built in swamps or marshes without draining them?
23
How expensive were castles? And how were the costs distributed?
1
How is the term "medieval" used to describe non-European civilizations and cultures?