Why are pre-Harappan strata grouped together with Early Harappan strata? Does this not obfuscate the development of the civilization?

(1) I don't understand why some sites are called early Harappan because these sites are pre-Harappan so why we use wrong name with that. Can any one explain?

Chronologically, there are several series of Chalcolithic settlements in India. Some are pre-Harappan, others are contemporaneous with the Harappan culture, and yet others are post-Harappan.

Pre-Harappan strata on some sites in the Harappan zone are also called early Harappan in order to distinguish them from the mature urban Indus civilization.

Thus, the pre-Harappan phase at Kalibangan in Rajasthan and Banawali in Haryana is distinctly Chalcolithic. So too is the case with Kot Diji in Sindh in Pakistan. Pre-Harappan and post-Harappan Chalcolithic cultures and those coexisting with the Harappan have been found in northern, western, and central India.An example is the Kayatha culture c. 2000–1800 BC, which existed towards the end of the Harappan culture. It has some pre-Harappan elements in pottery, but also evidences Harappan influence. Several post-Harappan Chalcolithic cultures in these areas are influenced by the post-urban phase of the Harappan culture.

(2) Harappan civilization has the following phases:

So, when excavation begin, in the first soil layers we get post-Harappan culuture, and then Late, then pre, and so on.

But, if we combine pre-Harappan layers into Early Harappan (as above), we lose the distinction between the developing and the developed state of the civilization. Does this not lose information that would tell us about how the valley developed?

(3) and here, Harappan zone means area around the Harappan city, am I right??

(4) I have also provided diagram what I understand until now. Is this correct? 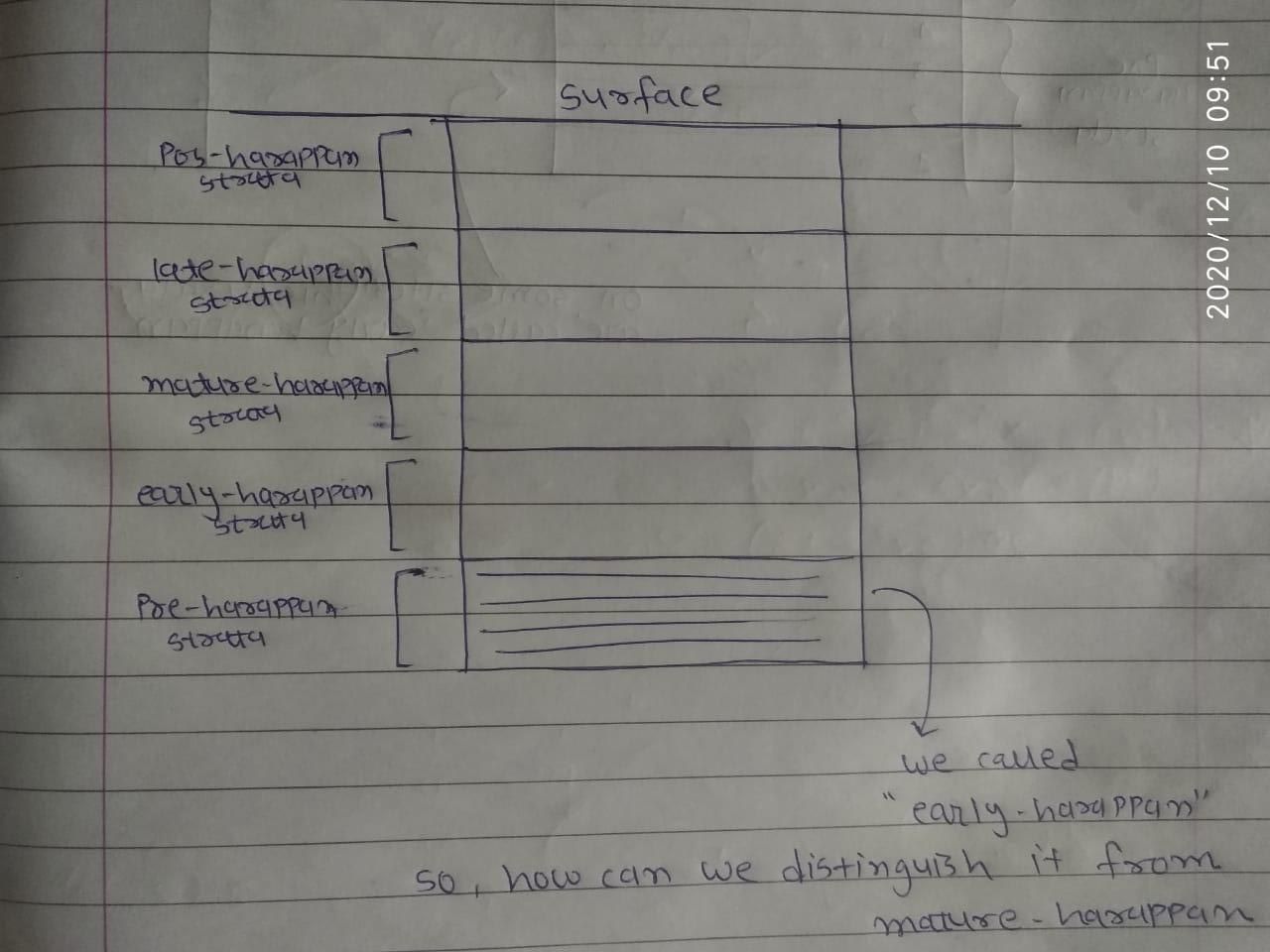 The confusion here seems to stem from the use of a combined pre-Harappan/early Harappan terminology. We can see this usage repeated in the Wikipedia article for the Indus valley Civilization, in the table on Chronology. If we look at the meaning and locations of these terms it might be more clear.

The pre-Harappan era is the oldest, and seems to mainly occur at the Mehrgarh site. One of the distinctions of this culture would be that it is aceramic Neolithic, before pottery was in use here.

The next step, also found at the Mehrgarh site, but at different levels, is Early Harappan. One distinction here is that pottery is now in use.

The distinction between these two eras being the lack of pottery would imply a certain uncertainty when excavating a site such as Mehrgarh. The layers you draw are not quite that clear-cut, and if you find no pottery when digging, is it pre-Harappan (pre-pottery) or just an area where you were unlucky and didn't find any pottery samples.

A safer label therefore would be the combined term of pre-Harappan/Early Harappan. Some regions with pottery represented, some without, but age indications placing the site definitely before the more developed culture labeled as the Mature Harappan.

Sometimes it is more accurate when describing something to use a 'fuzzy' definition then a more specific one which can't be supported by the evidence. (In genealogy, for instance, we often describe something undocumented as Before this date, or After another date-expressing uncertainty but giving information concerning what we may be sure of.)

Not the answer you're looking for? Browse other questions tagged ancient-history india indus-valley or ask your own question.

23
Did Antarctica remain entirely unvisited by humans until the early 19th century?
11
How much contact did Sub-Saharan Africa actually have with the rest of the world since the beginning of civilization?
14
Is David Graeber correct to assert that patriarchy did not exist in Sumeria?
11
When did Northern India and N. China begin to dominate in global demographics?
0
Interpreting two recent studies on Aryan Invasion/Migration theory?
6
Have historians attempted to reconstruct the polytheistic Semitic pantheon, dividing it into sub pantheons?
1
Is there any data that supports or refutes the claim made in this paper about the Harappan/Indus Valley civilization?
1
From where did Aryans originate?