Why did the Monitor and Merrimac (aka Virginia) have such radically different designs?

This is something that's always baffled me. You have one ship that appears to sit just above the water with one little canon on a turret (the Monitor) and a second that sits high and is brimming with canons on either side. Why did these two ships look so radically different? Were the designs intended to achieve different aims? 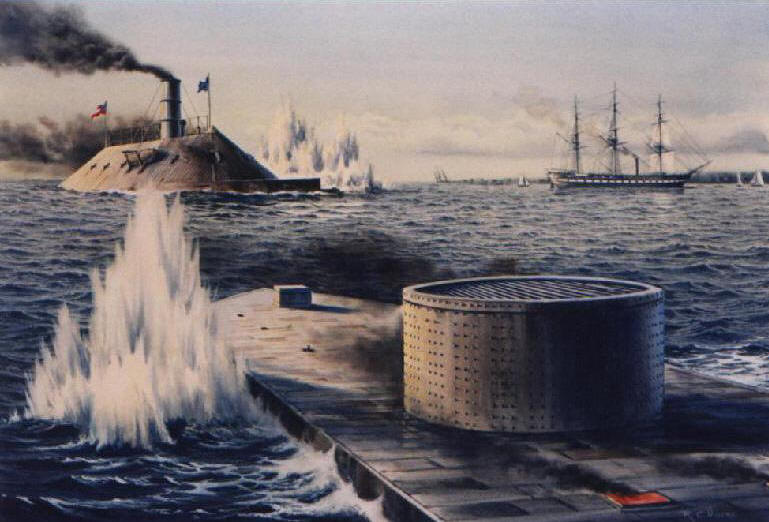 In 1861, the US issued an announcement that they were looking for designers to submit plans for an ironclad ship. They did this in response to information they were obtaining indicating that the South had already begun building their own ironclad ships. Realizing that there was no way they could defeat an ironclad navy with their own wooden ships, the US Navy decided to pursue their own. The winning design was one that was put together by a man named John Ericsson. His design had actually been submitted originally to Napoleon III in 1854, but Napoleon decided against it. After Ericsson convinced the US Navy that his ship was sound and could be built quickly, they decided to go with his design. This resulted in the construction of the USS Monitor. The monitor was designed as a ship with two guns placed side-by-side, hence the revolving turret, which was basically the only portion of the ship that was visible above water. This also presented a smaller target for opposing ships, making it more difficult to hit.

The CSS Virginia was built from remnants of the USS Merrimack, which had been salvaged by the Confederates in early 1862. The intention with this ship was to model it on current ship designs, with the bulk of the ship remaining below water. The topside would be covered with thick layers of iron to protect the ten guns that would be deployed. The Virginia was designed with the intention of becoming a wooden ship destroyer, and the Southerners believed that by having ten guns they would be able to dispatch the wooden ships of the US Navy pretty easily.

Ultimately, the primary reason that the USS Monitor was so different was simply that it was designed by someone who did not have a traditional naval background. He decided to think outside the box and came up with something less traditional. It is a credit to the US Navy that they were willing to take a chance on something so radically different.

Ironclad (and iron-hulled) warships were just beginning to be built when the American civil war broke out. There was no established design for them, and none had been tested in actual battle. This was the beginning of a period of rapid evolution of designs, which culminated 40 years later in the a somewhat standardized form, the dreadnought or battleship.

The CSS Virginia was a fairly straightforward adaptation of the traditional wooden ship of the line. It had the guns pointing outwards along the sides of the ship, allowing half of them to be brought to bear all at once on one target in a "broadside".

This has a significant drawback, in that the gross aiming of the guns must be done by maneuvering the ship. The USS Monitor was an alternative not suitable for wooden ships, nor for masted (sailing) ships. Its turret allowed the gun to be brought to bear on a target mostly independently of the ship's orientation and position.

At this early stage of iron warships, it was quite obscure what would actually work well. Hence, multiple designs made their appearance.

Not the answer you're looking for? Browse other questions tagged military 19th-century war american-civil-war naval or ask your own question.

6
Has the American Civil War led to any significant innovations in 19th-century warfare?

19
Bow shape of WW1 warships
13
How were the holes for the guns in battleships' turrets protected?
5
Why is the battle of Hampton Roads known as the Monitor vs the Merrimack?
4
How did messages get back and forth between ship and shore during the Battle of Cherbourg?
10
How did (riverine) toll castles operate?