What did medical treatments for fractured or broken bones cost in 1900-1915?

Let's say that you are in the year 1915, living in rural Eastern Europe, and you just got badly injured in an earthquake (not a huge earthquake, just big enough to crumble a small and poorly built barn on top of you).

For the sake of clarity, I will narrow it down to one injury: Fractured or broken bones. Of course, you could suffer many other possible injuries from an earthquake, but I want to make my question crystal clear. Broken bones are nothing too life-threatening nowadays but probably fairly concerning or possibly life-changing back then.

Could stuff like that be treated without a hospital by someone with past experience in the medical field? If possible, how could it be treated and what would be a good estimate of the cost for the treatment?

We are assuming you have a middle-class amount of money, and you have around 4-6 months to recover.

Would it be possible and/or affordable?

For Prussia in the German Empire there was a set of legal standard charges for physicians, effective when nothing else is contracted. In your period this was the "Preugo" Preußische Gebührenordnung für approbierte Ärzte und Zahnärzte, decreed in 1896 (German wiki). The next bigger revision was in 1924. Its text can be found in the Deutscher Reichs-Anzeiger und Könglich Preußischer Staats-Anzeiger of 19th May 1896 (scan).

For every treatment a range of prices is given. The exact charge is determined for the individual case: For poor patients and statutory health insurances for workers the lowest charge is picked (§ 2). In other cases it depends on the circumstances, exp. on the difficulty of the treatment and the financial situation of the patient.

The relevant charges for your case are:

Let's make a model calculation: You have a broken lower leg, go to the doctor for bandage and again three times for control. Your case is not very comlicated, but you have a middle-class amount of money. So the charge may be at around a third of the range.

For comparison in real life some figures of around 1900 (source, I do not know how good the figures are):

In 1848 Charlotteseville Virginia (US) setting a broken bone would have cost you exactly $5 for fingers/toes, $10 for Arms, clavicles, etc $15 for legs and $20 for thighs. 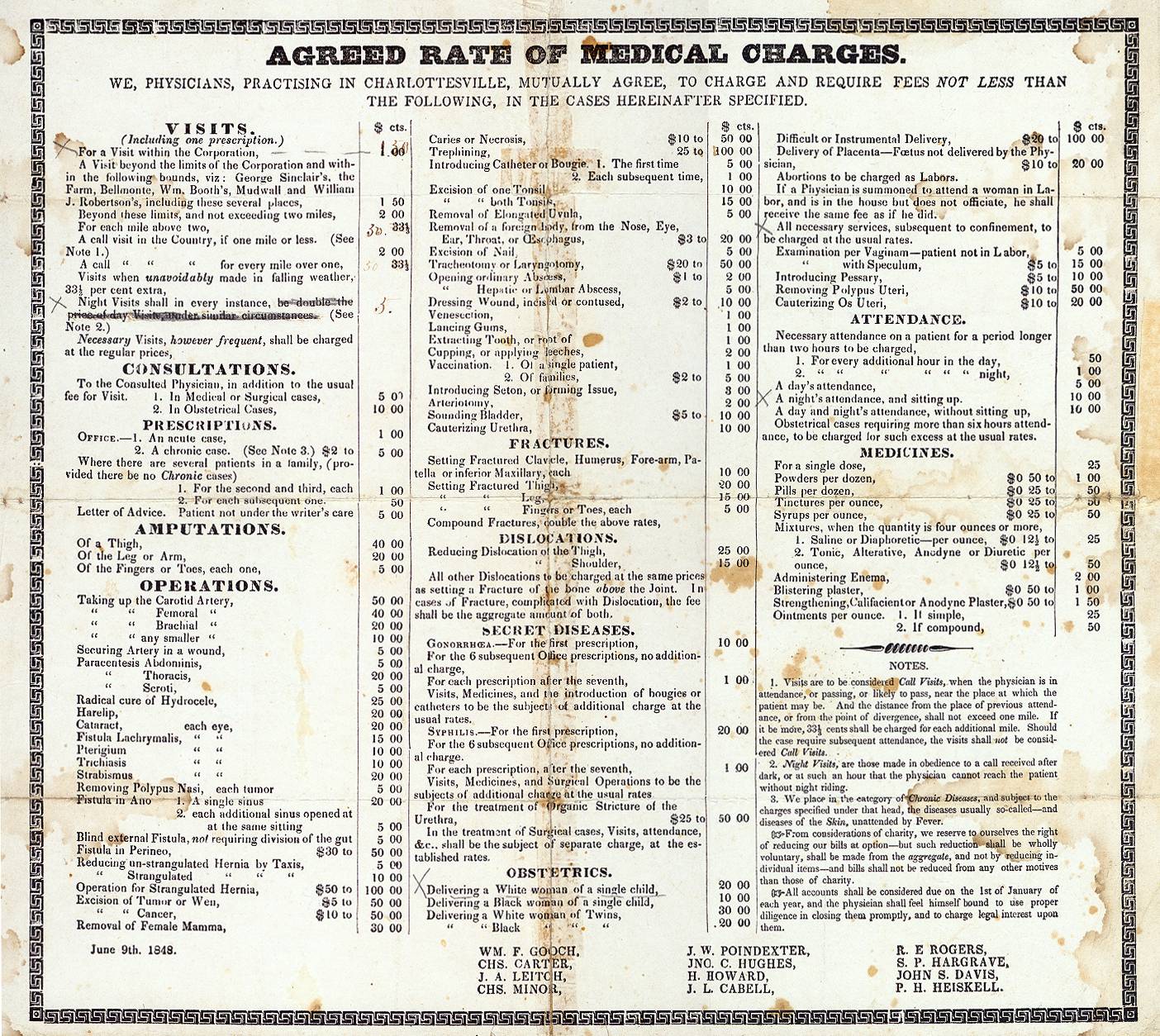 Shows a price list for medical treatements, set as fixed minimum prices by a group of doctors.

(This is not an answer, as I have found little information on prices, but gives a general picture about the available treatment and insurance options) My answer is specifically about historical Hungary (part of the Austrian-Hungarian Monarchy at that time), with the remarks that 1) earthquakes are practically non-existent in the area, 2) middle class, especially in rural areas, were also rare.

Short answer: In rural areas, external injuries were most probably were self-treated or by a surgeon (not a medical doctor, different profession)/barber. I couldn't find any price, but they were not regulated, also in-kind payment was common.

Long answer: The region went through heavy industrial development in the late 19th-early 20th century, which made the contrast between the cities and rural areas very high.

From [1]: The hospitals were mostly limited to urban centers and originated from the previous free (charity) hospital system sponsored by the Church and towns. To cover the health-related costs of urban workers, a German-type (Bismarck-type) compulsory health and accident insurance system become wide spread, closely regulated from 1891. This covered hostpitality care up to 20 weeks, free child birth services, free medicine etc. This system was covering the factory workers and trainees up to a 8 korona /day salary. The family members of workers and others under a certain salary cap could be covered in this system on voluntary basis.

While the large majority of the country were still based on agrar production, their health care were far less organized. For agrarian workers (from 1900), and later an machinist for agricultural work (from 1902/1912) there were a compulsory accident insurance (no compulsory health insurance). For servants/handmaids ("cseled") their master had to pay an insurance of 120 filler per year, and also were responsible to cover medical care, hospital costs and medicine up to 30 days.
I could not find data on costs for people outside the insurance system.

Ref [2] is more focused on countryside of 19th century (as that era is the research field of the author) with remarks that the situation changed little up to mid 20th century.

According to this Ref, there were a huge gap between urban and rural areas both in conditions and how people viewed health care. The majority of population still lived outside of the modernization that started in the bigger towns, and hardly ever seen a doctor or a hospital in his life. Many sources of the era describe the rural population as uneducated and extremly indifferent about health. For example, even in one of the most developed region of the country (including smaller towns and villages) 70% of the people had no medical treatment before death. This was much higher with children, who were generally considered "uncurable" if they had any medical problems. While most of the citations are from the second half of 19th century, this was typical up to mid 20th according to the author. In general, the rural population didn't trust modern medical practices or doctors, and relied on self-treatment (herbs, spirits) and traditional healers (midwives, surgeons, barbers). From the second half of 19th centry, these traditional healers were also obligated to take some training at medical universities, but some of these were only a 7-10 days long course.

Not the answer you're looking for? Browse other questions tagged medicine money or ask your own question.